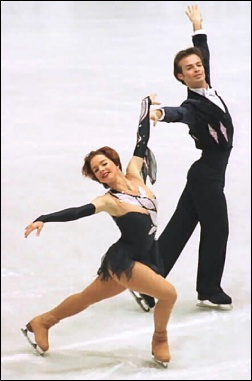 The German brother-sister ice dancing team of Stephanie and Thomas Rauer is a highlight of any competition.

The German brother-sister ice dancing team of Stephanie and Thomas Rauer is a highlight of any competition. Not because the skaters win many events, but because their innovative programs and joy in skating always bring a positive reaction from the crowd. “The applause is a big reason why we are skating,” Thomas stated. People like what we do. It’s fun for the people and fun for us. We want to keep skating as long as possible and have fun with it. I think we would be good show skaters.”

That’s not to say that the dancers don’t want to win. “We want to improve our ranking at the Europeans and Worlds and we really hope we can go to the Olympics in 2002,” Thomas added. “That would be a really big deal for us.” The couple has been fairly successful in Germany, winning the national senior dance championship in 2001 after three silvers and a bronze in previous years, plus two junior national titles. They also took the bronze at the Nebelhorn Trophy in 1999 and have competed in Grand Prix events in France, Germany, and Russia. The Sparkassen Cup on Ice, where they have competed each of the last three years, is one of their favorite events since it is only a few miles from their home.

The dancers also train in Berlin, Obertsdorf, and Dortmund with coach Oleg Ryjkin and choreographer Rostislav Sinitzin. They train about four hours a day, six days a week on ice, then another hour or two off ice. “Every day is different off ice, sometimes ballet, sometimes physio. It’s like a circus,” Thomas noted. Both of the dancers have taken ballet for the last eight years. Both skaters participate in other sports, especially skiing. Thomas also plays badminton, while Stephanie enjoys riding horses.

When they can, the siblings like to skate to “music which is light and fun and makes the audience laugh,” Thomas said. “We get an idea of what we want to do and then we look for the music for it. Then we sit together with our coach and our choreographer to pick what’s best. “Last year they used the Charleston as part of their original dance and music from “Tarzan” for their free dance.

“The new rules allow more freedom and expression, especially with the use of vocals,” Thomas noted. “It’s a great experience to have the three minute original dance where you have to change music and expression. It’s quite interesting.” “We like to do quick dances since our style is small and fast,” said Stephanie.

The dancers don’t have any particular role models among other ice dancers. “All the big skaters have something to enjoy,” Stephanie noted, “but I like Gritschuk and Platov, because their style was very individual.” Almost all other skaters are taller than the Rauers. Thomas noted that “one year, we were in a practice group with Krylova and Ovsiannikov and Anissina and Peizerat for the tango. Since we are not as big as they are, we have to skate faster than the other couples. But we did big edges and showed it was possible and they accepted us as friends.” Stephanie explained that “we can do the same edges and with better technique than some of the other couples, but we have to fight very hard to make it clear to the judges that we are as good. We have to skate 200 percent better to beat them in competition.”

The couple has been skating for 13 years together, which makes their communication near perfect. “We know each other so well, I know what she’s thinking,” said Thomas. Stephanie began skating at seven, when a friend asked her to come and try skating. Her friend quit in a week, but Stephanie continued, skating singles for two years before switching to dance. Thomas started when he was ten, trying out the ice at public skating when he was on holiday. When he liked it, he began dancing with Stephanie. “It was more fun to do dance,” he said, “and our first coach was a dance coach.”

Thomas is a sergeant in the sports group in the German army to help pay for training, but will finish his service next year. He intends to start university studies next year with hopes of becoming a doctor. Stephanie is at the university studying social welfare and hopes to work with children. They skate in the afternoon so she can attend classes in the morning.

To relax, Stephanie likes to go out with friends for shopping, dancing and the cinema. She collects skating pins and photographs. She prefers popular music, while Thomas listens to a lot of soul music and Elton John. He also enjoys reading, especially books on philosophy. “I like modern and old philosophy books, existentialism, Chinese and Greek philosophy and that of other countries. There’s a balance in philosophy,” he stated.