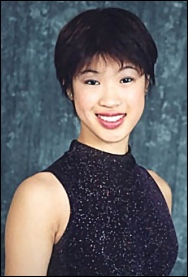 Susan Ng says thanks to all fans!

Susan first started skating when she was seven years old. Her mother wanted her to pick up some type of sport rather than sitting at home reading all day long. Susan received a number of choices such as swimming, tennis, basketball, ballet, and much more. The only thing that interested her at all, besides gymnastics, was figure skating. “I had never watched figure skating before, so I do not know why I picked it. However, I am very glad that I did. I loved it from the very first moment I stepped on the ice and continue to enjoy it,” said Ng.

During her first two years, Ng skated twice a week on public sessions, took group lessons, and a few private lessons. “I did I.S.I. competitions for fun and won my first competition,” recalled Ng. “It may have been beginner’s luck, but I was thrilled anyway. I started skating more seriously when I was nine. I learned my single Axel and all of most of my doubles and took both my Pre-Preliminary and Preliminary test that year. When I was ten, I took my Pre-Juvenile and Juvenile tests and competed in the Southwest Pacific Regional Championships for the first time.”

“I really love the feeling of flying I get when I am skating fast across the ice. It feels like you’re soaring,” exclaimed Ng. “You would think that’s what the jumps would feel like, but it comes out more in stroking and spirals. I also enjoy jumping. Although it is difficult, I enjoy the challenge of learning new jumps.”

“I really look up to Kristi Yamaguchi and Michelle Kwan for their consistency, technique, and how nice they are to their fans, fellow skaters, and people in general. I am fortunate enough to have met both of them, which made me admire them even more. It is really motivating for me to watch them skate and compete,” said Ng.

Ng’s goals and dreams for the future are to medal in the three major figure skating competitions. The National Championships, the World Championships, and the Olympic Games. In addition, she would like to graduate college as well as write a series of children’s books about figure skating.

GS: Fans would like to know hw is your knee doing?

Susan: My knee is doing a lot better. I would say it’s all better now or at least, it’s as good as it’s going to get. It still aches sometimes but it’s more annoying than anything else.

GS: What are your goals for the future in regards to skating? Do you intend to compete this upcoming season?

Susan: I am not going to be competing this upcoming season. I had originally been planning on coming back for this competitive season, but it just didn’t work out. My knee may be better, but it starts really hurting again whenever I have been working on triple jumps for a few weeks. I didn’t really think it would be worth it to try to compete in singles, especially this year. Right now, I’m hoping to start competing in ice dancing. I haven’t found a partner yet, but I’ve been working hard by myself. So far, I have passed all my Bronze dances and I’m working on my Pre-Silver ones. I would love to compete in Novice next season if at all possible. With regards to singles skating, I am considering competing in collegiate competitions, but that’s still up in the air.

GS: Are you still on the UC Irvine DanceSport Team?

Susan: Yes, I am still on the UC Irvine DanceSport Team. I’m not the undergraduate captain anymore, though. There’s a lot of stuff I’ve been wanting to do and I didn’t want to over-commit myself.

GS: Looking back at your competitive history thus far, which competition was the most memorable and why?

Susan: Hmmmm… that’s a tough one. So many of them have been memorable for all different reasons that I can’t really pick one in particular. In general, all of my internationals and Nationals have a lot of memories for me. Some of them are good memories and some aren’t so great. I think there’s just so much adrenaline going at these competitions and emotions run so high that everything just gets burned into memory.

GS: During your competitive career in the past, what was your most embarrassing moment or occurrence? Is there anything you can share with the public that we don’t know already?

Susan: My most embarrassing moment happened a long time ago. I find it really funny now, but I thought it was the most horrible thing ever at the time. I was skating to Pocahontas for a Fourth of July show at my rink at the time. The thing was, there was only one or two skaters between my program and a group number I was in, so I had to change really fast. I was rushing to change as fast as I could and managed to put my dress on backwards (no zipper or hooks). It was just like the one Pocahontas wore in the movie so I basically went out and skated rather exposed on one side. One of the coaches actually noticed before I went out, but they didn’t stop me because there wasn’t enough time for me to try to turn it around. I was near crying when I found out later. I was young then, so I guess it wasn’t that bad but just the idea… haha. Yeah, that was pretty bad but hey, everyone has their own embarrassing moments. Why not laugh about it? 😉

GS: What do you feel are your strengths in skating?

Susan: I think my strengths in skating would be my artistry and flexibility. That’s what I’m generally told anyway, and I think it’s probably true.

GS: What is your favorite jump to perform and which do you feel is the most difficult?

Susan: My favorite jump is the double Axel. It’s just a really easy jump for me and I love the way it flows. I still do it for fun every once in a while. I think the most difficult one would be the triple loop.

GS: Is there any particular piece of music that you would like to skate to that you haven’t had the opportunity to do so? Can you elaborate?

Susan: There is a lot of music I really want to skate to that I haven’t been able to yet. Two of them would be my music for this year. I actually have a short and long program choreographed. My short is to music by David Lanz. One of the songs that I used is called “Cristofori’s Dream.” It’s just the prettiest music. I’ve actually been saving it for a couple years, waiting for the right time to use it. My long program is from Crouching Tiger Hidden Dragon. I remember watching that music and just thinking how much I would love skating to the music. I suppose that would be incentive for competing in collegiate competitions. I want to skate those programs! Other than that, there’s a lot of music that I would love to skate to for exhibitions. The first one was actually suggested to me by someone I met through my website. Her name is Rebecca Secia. We had been discussing music and she suggested the song “How Beautiful” by Twila Paris. I listened to it and loved it. I think it’s perfect for skating. From my own picks, I would also like to skate to “If You Want Me To” by Ginny Owens and “On My Knees” by Jaci Velasquez.

GS: Is there any particular music you absolutely refuse to skate to and if so, why?

Susan: I wouldn’t skate to any music that I dislike because that just wouldn’t make sense. If the music has lyrics, I try to listen to the words and see what kind of message is being given through the music. If it’s something I don’t agree with, then I won’t skate to it.

GS: How do you like the University of California and where are you at right now in your degree? Are you still majoring in Psychology?

Susan: I am really enjoying my time at UC Irvine. I’m staying on campus this year, which is nice because commuting took up a lot of extra time. I am still majoring in Psychology and am actually taking a sports psychology course this quarter. I’m also thinking of going into Pharmacy, so I’m trying to fulfill all of the Pre-Pharmacy requirements in addition to the ones for my major. Since I’m not completely sure what I want to do yet, I figured it would be best to keep my options open.

GS: Is there anyone special or significant in your life that you would like to share with us?

Susan: God is awesome! I just had to say that. He has helped me so much through the years. I mean, without Him, so much stuff just wouldn’t make sense. Knowing that He has a bigger, better plan and that He wants the best for me helped me to deal with my different injuries, disappointments and other problems. It’s really cool because I’ve been able to see stuff that seemed just plain bad at the time turn out far better than I could have imagined later on, which just goes to prove that point (at least for me it does). He loves and wants the best for each and every one of us. I mean, He came down to earth all those years ago to die for OUR sins and all the mistakes that we made, despite the fact that He knew a lot of us wouldn’t even care or realize the significance of what He did. That takes far more love than I could fully imagine. I’ll never be thankful enough for all that He has done.

On a different note, I really want to thank my family and especially my mom for being so supportive of me in my skating all these years and for continuing to be an encouragement to me. I love you guys so much! For everyone who has been praying for my mom during her treatment for breast cancer, I want to take this time to thank you for your prayers. It meant a lot to us. The doctors are pretty sure the cancer is gone and she’s recovering really well. God does answer prayers. 🙂

GS: Is there anything you’d like to add or to say to your fans?

Susan: Thanks for being so wonderful and supportive of me. Your encouragement has been such a blessing. I really appreciate it. Just want to send a great big *hug* to you all! 🙂 — Susan Ng