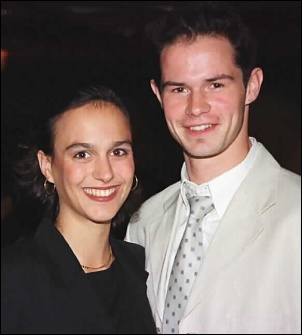 Marie-Pierre Leray is back in figure skating after a two-year absence with Nicolas Osseland.

France’s Marie-Pierre Leray is back in figure skating after a two-year absence. This time she’s skating pairs, her first love, with Nicolas Osseland. The duo hope to challenge World bronze medalists Sarah Abitbol and Stephane Bernadis for the French title and qualify for the Olympics and Worlds in pairs. Leray already has one French pairs gold medal from her first senior season with Frederic Lipka in 1993, when the team beat Abitbol and Bernadis.

Leray discovered figure skating when she was about 6-7 years old. “We used to go to the pool on Sunday, but one day we went to the ice rink. I started as a hobby and first I went once a week, then twice a week, then twice a day. Then I went to ice skating school at 10.” Although she never took ballet, Marie-Pierre did study gymnastics and like Vanessa Gusmeroli had to make a choice between two sports. The choice wasn’t too hard, she said. “Skating has a lot of things — grace, technique, music, costuming. For girls, it’s a very nice sport, combining both the physical and the artistic.”

In the beginning, the club she joined was only artistic, but she soon began competing in pairs with Lipka, but he decided not to continue after French Nationals. Marie-Pierre had no desire to quit. “I like competitions,” she said. “I really enjoy them. I like to create programs and invent new things. I even like jumping although sometimes I have problems with them.” But she couldn’t find a partner, so she concentrated on ladies singles, finishing as high as eighth at the 1995 World Championships. Leray also has three silvers and a bronze at the French Nationals in ladies.

But she developed an ankle problem that hampered her development. “It was always hurting and it was not a pleasure to skate with pain,” she lamented. “I didn’t skate at all, not even for fun, for two years. Then I got a special boot insert and I could skate again.” She finished 17th at the 1998 World Championships in Minneapolis, but then stopped skating competitively.

Since she was attending a school in the Alps to study marketing and finance, Marie-Pierre took a job in an ice show at Eurodisney near Paris that would allow her plenty of time to study for exams. “It’s not easy to do both school and skating, but the degree will be a good base for starting a company. Now I don’t have to think about studying while training,” she said at the time. She finished her degree last spring and immediately began planning a return to eligible skating in pairs. “I’m very happy now, but I want to get back to the level I was before,” she said.

Osseland explained that “I did a tryout with Marie-Pierre a few years ago but as she’s tall, I wasn’t strong enough. But last year, she gave me a phone call to ask if I would like to do pairs with her. It took me a little time to say yes because I was with a Canadian partner who was injured at that time, but finally I said yes to her.” The couple won the bronze medal at the Golden Spin of Zagreb, their first competition, and finished ninth at seventh respectively at the Grand Prix events in Germany and France in November before winning the silver medal at the 2001 French Nationals. They plan to skate together for several years.

Nicolas first began skating in Nancy in France when he was four because the ice rink was only five minutes from the place where his parents worked. One of his older brothers got him interested in the sport. He began skating pairs six years ago. “I decided that my career as a single was nearly over and as I was a bit stronger than other skaters of my age I decided to change my direction in figure skating,” he said. “I really started pairs in 1996 with Sabrina Lefrançois, then I stopped in the middle of 1998 due to a knee surgery and started again in the middle of 1999.”

Both skaters really enjoy the interaction between the partners that comes in pairs. “I think that there is really something strong between both partners,” Osseland stated. “You can share with each other and show people different feelings than in singles. Who would be Juliet without Romeo?” No wonder his favorite pairs skaters are Jamie Sale and David Pelletier, who used “Love Story” last season. “They are so smooth, clean, everything is under control,” he marveled.

“I like jumps, but not the triple Axel,” Osseland said. “I have to work a lot on lifts because my foot steps were not really good. We do triple toe loop as a side by side jump, throw triple salchow, throw double Axel and also throw triple loop. Marie is just having fun with skating and that’s all! Every moment on the ice is good for her. She’s always smiling and it ‘s good to skate with someone like her,” he continued.

The figure skaters train at Montpellier, France, with Sylvain Privé. Their programs are choreographed by Line Haddad, who previously competed with Privé. They spend about three hours on ice and an hour and a half off ice every day. Their off ice training includes running and body fitness exercises, but no ballet, even though both skaters have ballet training.

Osseland described how the couple found their music for their first year. “For the long program, we use a tango from the movie “Tango” and for the short program, it’s something more punchy but it’s hard to define. It’s from Brian Setzer and his band, it’s a kind of rock! I wanted a tango for the long program and I proposed the theme to Marie who agree with me. For the short it was just good luck. We went into a music store and the music was playing just at this moment. It sounded just great to our ears, we bought the CD and this is it!”

“I like to skate to strong music with temper, something you can play some kind of game like in acting,” he said.” Off ice, I listen to every kind of music but I prefer cool songs like blues such as Johnny Lang.” He also plays the saxophone.

Marie-Pierre looks like a model (and posed once for Patinage), but she’s actually involved in a lot of physical activities. “I really like all kinds of sports. I don’t water ski because I swim terrible but I like running, snowboarding, snow skiing, rafting and climbing and I love to try new things. I skydive and that’s really great.” Nicolas is not quite as daring as Marie-Pierre. He said that “I practice the capoeira for fun. It is just a great sport/dance!!!” I played rugby and baseball in school, but not now.”

Leray also enjoys going to shows and bistros in Paris. “I like the city a lot,” she said. She goes to the movies, as long as they’re not scary ones, and enjoys listening to music from movies and French singers. Nicolas also enjoys the cinema, having fun with his friends, and spending time with his family, which is difficult since he is training in Canada. He likes to read books like “The Red Dragon” from Thomas Harris and “L A Confidential” from J Ellroy. Nicolas has lots of pets at home in Nancy: two dogs (a Rotweiller and a labrador) ,four cats, birds, and fish. Leray doesn’t have any pets, but has kept all the toys she has received when skating, the most unusual being a giant stuffed ostrich.

Leray loves to travel and said “I go to the sea and sunny places like Tunisia. I want to go to Africa because we never skate there and I’d like to see what it’s like. I’d love to go to Australia.” Nicolas would also like to visit Australia, but fell in love with Canada during his training there.

Following Leray’s lead, Osseland is also studying marketing at the University of Montpellier and hopes to work in that field. “I have to finish my studies first and then I’ll see,” he said.