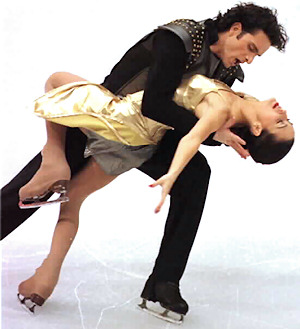 After three years as the fourth place ice dance team in Canada, Marie-France Dubreuil and Patrice Lauzon leapt to the top of the podium in 2000.

After three years as the fourth place ice dance team in Canada, Marie-France Dubreuil and Patrice Lauzon leapt to the top of the podium in 2000, earning a trip to their first major internationals, the Four Continents Championships and Worlds, where they finished second and tenth. With the return of Shae-Lynn Bourne and Victor Kraatz in 2001, the talented dancers slipped to second in Canada but still showed well internationally with a bronze at Four Continents and 11th at Worlds. They also competed in their first Grand Prix Final that season, finishing sixth. This year they finished second behind Bourne and Kraatz at Canadian Nationals, but with their highest marks yet from the judges.

The dancers are not focused solely on medals. “We hope to go to the Olympics,” Dubreuil said, “but we want to take one thing at a time and enjoy the moment. The the emotion shows more.” Both dancers like to show their emotions on the ice. “Ice dancing is the only sport where you get to be physical and express your feelings,” Lauzon said. “It’s the perfect mix of athleticism and art,” Marie-France added. “I have to skate to romantic and dramatic music I really feel or I can’t move my feet on the ice. I have to love it.”

The couple’s desire for emotion in their dancing carries over into their compulsories. “The Tango Romantica is our favorite,” Lauzon said. “It’s a very romantic tango and we look really French so it’s for us.” “It’s a very challenging dance,” Marie-France added, “but there’s time for expression. We don’t really like the waltzes, like the Viennese and the Westminster. We have to hold back. Those dances really don’t fit on the ice.”

Neither of the skaters originally intended to go into ice dancing. Lauzon played defense in hockey and took figure skating classes to improve his hockey skating. He still plays for fun. He skated in singles until he was 12, when someone asked him to skate with a girl. Since he didn’t like freestyle that much, he agreed to become a dancer. Marie-France had watched skating on television since she was two and asked for lessons for her birthday when she was five. Her mother didn’t want her to skate competitively, but her godmother gave her skates for a present and her career began. She also participated in gymnastics when she was six, but quit when she saw another girl fall on her head. Marie-France skated freestyle until she was ten, when she asked to switch to dance. She finished as high as third at the 1990 World Juniors with former partner Bruno Yvars before joining Lauzon. She and Patrice have skated together since 1996.

The dancers spend between one and five hours a day on ice, sometimes more if something need to be done. Off ice, they work in the gym with a personal trainer in a special exercise program four times a week, doing exercises that involve lifting their own weight. They also do ballet twice a week, a regimen Dubreuil started at six, and Lauzon at 15. To refine their dance moves, the dancers work with Majoli, a professional dancer.

Dubreuil and Lauzon hope to have a professional skating career if things go their way, but if not, they want to continue in the sport as coaches. Both now teach children at the Center Elite Boucherville and do some choreography for novice dancers. Working is nothing new for Lauzon, who chose to pay his own way at 15 and quit school to concentrate on work and skating. He changes tires and fixes cars in a garage to support their training costs. Dubreuil attended college for a year, but stopped because she couldn’t do both. “I like to learn,” she said. “I read a lot of books and magazines on psychology.”

The duo became a couple off ice as well as on when they competed at the Golden spin of Zagreb in 1996, where they finished second. “We went expecting the worst, but it’s a great city with sidewalk cafes everywhere. We started going together there and it has a special place in our hearts,” Marie-France exclaimed. To relax, the couple spends time together in their small apartment, often playing with their Burmese mountain dog. Sometimes they go to the movies. “Not action movies with blood and stuff, but French and Italian and British movies — unpredictable movies, different than American movies,” Dubreuil stated. After skating, she often listens to classical music, but listens to different music depending on the time of the day. “I like songs with words and meaning,” she said. Patrice listens mainly to classic 1980s rock. “When I want to relax, I go to the garage and rebuild cars by myself, like I’m working in a little bubble,” he explained.