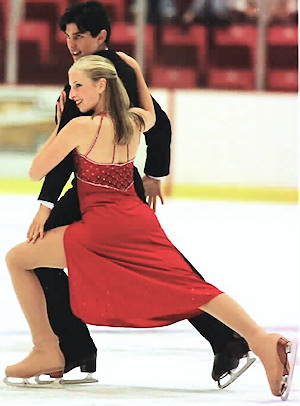 For several years, ice dancing has been declining in the United States, especially in seniors, but there are a number of talented couples in the junior ranks that could become successful seniors. One of the contenders is the team of Kirsten Frisch and Brent Bommentre, both 16. The team has an exceptional look, with the willowy strawberry-blonde Frisch complimenting Bommentre’s dark good looks.

Frisch and Bommentre won the bronze medal in novice in their first U.S. Nationals in 2000, then finished sixth in juniors at the 2001 U.S. Nationals. At the Lake Placid Dance Championships in August, they won all four compulsories and finished third in both the original dance and the free dance. This year they finished fourth at Nationals, although they were third in both compulsory dances.

Kirsten began skating when she was seven after her parents promised to take her skating if she behaved with her sitter while they were out. “It was something I had never done before and it was fun,” she said. Although she tried freestyle, she quickly gravitated to ice dancing. “I was just plain old better at dance, and I liked skating with a partner, so it seemed like the right choice.” Brent began skating when he was six. “I had asthma, and we asked our doctor what sport would be best,” he stated. He said he chose dance because “I don’t like falling.”

When Brent’s former partner retired, Kirsten’s coach, Rick Berg, called Brent’s coach Robbie Kaine and they arranged a tryout. The couple was well matched and began training with Kaine and Cheryl Demkowski Snyder at both the Wissahickon Skating Club and Ice Works. They train for about three hours every weekday on ice plus another 1-2 hours off ice doing weightlifting, ballet, jazz, and ballroom dance. They also spend another four hours on Saturdays doing ballroom and jazz dancing. Kirsten has been taking ballet lessons since she was three and was actually committed to that before she began skating, while Brent just started two years ago.

Diane Agle choreographed this season’s free dance to “Carnivale de Paris” while Snyder choreographed their original dance using “Nyah” from the Mission Impossible 2 soundtrack. “We wanted to find something that was fun and lively like Brent and my personalities,” Kirsten stated. She likes the music to be “something that I can relate to and basically anything that I can get into emotionally.” Brent said, “I like to warm up to something with a beat, but when it comes to competition the music has to be fast and have a lot of energy and personality to it.” Off ice, he listens to classic rock while Kirsten enjoys techno and pop/rock music but will listen to anything except country and western music. Kirsten also studied piano for four years, but rarely plays.

Kirsten loves learning new moves. Her favorite dances are the Starlight Waltz and the Quickstep, but she doesn’t like the rhumba. “I am so turned in that the choctaw is a killer,” she said. Conversely, the rhumba is one of Brent’s favorites, along with the Yankee polka, and the tango romantica. He cited the cha-cha congelado as his hardest dance.

The couple hopes to go to Junior Worlds, Worlds, and the 2006 Olympics. Both Brent and Kirsten want to compete as long as they enjoy it, and then teach skating after they finish competing. Kirsten hasn’t decided on a career yet, but she’s interested in several diverse fields including the law, science, and photography. She is a junior at Randolph High School, where she gets mainly A’s and B’s. Brent attends LaSalle College High School, where he maintains a 3.5 GPA.

To relax, Kirsten enjoys hanging out with friends, shopping, and playing with her dog, Kasey, a Cavalier Spaniel. Brent likes to play video games, watch television and go to action and comedy movies. Kirsten watches “thrillers, mysteries, comedies, anything good. I love corny perfect romances. My favorites are Dirty Dancing and Addicted to Love”. She enjoys thrillers “like serial killer stories and freaky stuff like that” while he likes to read “anything that deals with science.” Kirsten also collects Coke cans from all of the places she’s been to on internationals.

“I want to see the world — Italy, Australia, Japan, all over,” she said. “My favorite trip so far was China for our international. That was so cool.” Brent’s favorite trip was to France. He too would like to visit Italy. “Usually Brent and I are training during vacations, but this year for the first time in a long time I got to go to Florida for spring break.”