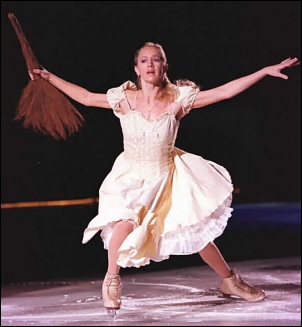 Cinderella and the Nutcracker are traditional favorites for holiday ice shows, but count on two-time Olympic dance champion Oksana (Pasha) Grishuk to add a new twist by combining the two into a single show.

Cinderella and the Nutcracker are traditional favorites for holiday ice shows, but count on two-time Olympic dance champion Oksana (Pasha) Grishuk to add a new twist by combining the two into a single show. Grishuk choreographed the new MEG LLC/Jay Ward production which opened a 14-city tour of Louisiana and Texas in New Orleans the week after Thanksgiving. “Pasha’s choreography for the tour was a wonder to behold. To observe and see how she puts together complex moves from zero, almost as born to the task, is awesome,” Ward stated. Amy Tinkham, a Sundance gold medal winner who has worked with major stars such as Madonna and Britney Spears, directed the production.

Grishuk was undoubtedly the star of the show. The five-time world ice dancing champion played both Cinderella and Clara and appeared in almost every number in both productions. Not only did she dance, she also did freestyle and pairs as well as ensemble numbers. Eric Bohnstedt, who worked with Grishuk in last year’s production of the Nutcracker, partnered Grishuk for the dance segments, while Michael Aldred worked with Grishuk in pairs.

Aldred, who won three British pairs titles with Lesley Rogers, had been out of skating for the past two years, but was able to quickly teach Grishuk how to do several pairs moves. “When they called me, I told Oksana that I’d be happy to do dancy stuff with her but that I’d really like to teach her some pairs moves,” Aldred stated. “Oksana really wanted to be lifted. She kept saying, ‘lift me, lift me.’ Skating with her was a dream come true as I had liked her skating from as far back as the 1994 free dance at the Olympics so skating with her was great. It was hard as she was so fast and wanted perfection but we taught each other so many things and both found our love for skating again, by skating with each other.” “Mike is a rare find and a very hard worker,” Ward said. “I understand they will continue to perform together in professional competitions and shows around the world.”

The show opened with young Clara, played by charming 9-year-old Marina Guterres, who receives a skating Cinderella doll for a Christmas gift. Guterres, spiraled, spun, and jumped carrying the doll before going to bed to dream of Cinderella. Grishuk then entered as Cinderella to perform her first freestyle program, a solo waltz which included an excellent back spin and high back spiral. She was interrupted by the evil stepsisters, Eric Bohnstedt and Derek Trent in drag, who performed their own comedy skating routine. Aided by Faith Neenan as the wicked stepmother, they harassed Cinderella until they were interrupted by invitations to the prince’s ball, after which they fought over dresses. Grishuk again skated a solo before exiting. Pixies, played by Guterres and her younger brother, Taiga, then performed a short pairs routine as the Mouse (Jessica Markham) and the Fairy godmother (Liz Allen) did solos.

The scene shifted to the ball, where Aldred as the prince danced with the ladies including Allen, Neenan, Markham, Jennifer Humphrey, Kristy Evans, and Olga Zhiltsova. But once the stepsisters arrived, the prince had to hide from their attentions until Cinderella (Grishuk) arrived. She and Aldred performed an adagio pairs number to “Where I Belong,” including side-by-side doubles, pairs spins, and several lifts (sit, platter and star) before the clock strikes midnight and the first half ended.

The second half of the production, the Nutcracker, started like the first, with Marina Guterres unwrapping a Nutcracker doll and skating with it, before going to sleep. Grishuk, as Clara, skated first a solo, and then a brief pairs adagio with Aldred, in the midst of the female ensemble.

Several short duets followed as the skaters entered Candyland. This included the Guterres siblings second pairs number as the Petite Fours and two pairs numbers from Eric Bohnstedt and Jennifer Humphrey, one to a Spanish flamenco and the other to Oriental music. Derek Trent and Vladimir Peganov also performed twice as dueling soloists, first with a Russian dance and later as court jesters. Halfway through this segment, the ensemble ladies performed an Arabian harem dance to allow the others time for costume changes.

After the Candyland scene, the ladies performed the “Waltz of the Flowers,” throwing rose petals to the crowd as they performed a variety of synchronized and solo moves including spins, spirals and double jumps, highlighted by Olga Zhiltsova’s Biellman spin. As their routine ended, Grishuk and Aldred entered for their Pas de Deux. The most intricate of their programs included several lifts including one in which Grishuk was draped around Aldred’s neck holding her skates as her spins her. Other moves included a throw double salchow, combination spins, and a spiral and split on the ice by Grishuk. A headbanger and one-handed Detroiter were highlights of the routine.

For the ending, the Guterres pair emulated the adult skaters before Aldred and Taiga leaves. Grishuk skated briefly with the Nutcracker before handing the doll to Marina at the end. The show proved more popular with fans than many of the Grand Prix and other professional events, with over 15,000 seeing the tour in New Orleans.

All of the skaters were sad to see the tour end. Ensemble skater Liz Allen said, “Working for the show was absolutely fabulous! This was my first tour and after years of competitive figure skating, I know now this is what I want to do. Finally, no biased judges scrutinizing every edge. Having a live audience applauding your hard work was such a reward! It made me work all the harder because of it. Pasha was so wonderful to work for. Not at all like she is portrayed by the news media. She was friendly, hard-working, professional, and extremely supportive. She was absolutely great!”

“There was one show in the beginning of our tour that was exceptionally challenging.” Allen continued. “It was a show in the middle of nowhere in Abilene, Texas. The rink was a muddy, frozen, patch inside a barn-like structure, a rodeo hall is what I think they called it, outside a stockyard. I thought, how are we ever going to put on a show in here. I was amazed to find out it was to a sold out crowd. When I saw the audience, the families and all the excited kids, I knew whatever it took, we would team up together and give this rural crowd their much anticipated ice show. Somehow we pulled it off! It was one of our best shows ever! We were rewarded by the delighted crowd, receiving a thunderous applause. So I found out things are possible with hard work and determination. I guess training at a posh, new training center in Colorado Springs, has made me a bit spoiled in the past, but now I think I could skate on just about anything frozen, even if it is mud.”