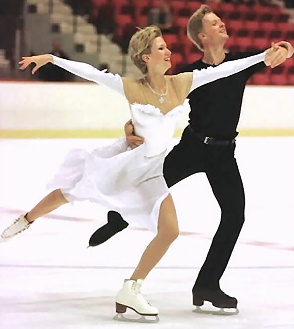 Tiffany Hyden, who finished fifth in ice dance at the U.S. Nationals in 1999 with former partner John Lee, will be back with Vazgem Azrojan.

Tiffany Hyden, who finished fifth in ice dance at the U. S. Nationals in 1999 with former partner John Lee will be back competing in the United States this season with a new partner, Vazgen Azrojan. The couple skated for Armenia, the homeland of Azrojan’s relatives, in 2000 and 2001 because Azrojan had not completed all of his USFSA dance tests. They skated at both Europeans and Worlds, gaining important international experience before returning to U.S. competition at the Lake Placid Dance Competition in August.

After splitting from Lee, Hyden was paired with Azrojan, who was born in Odessa in the Ukraine, by Natalia Linichuk at the University of Delaware. Azrojan had competed for Russia with a succession of partners including Ekaterina Davydova. “Skating with Vazgen came very naturally from the beginning, as we seemed to have a similar style of skating and body movement in general,” Tiffany stated.

Hyden began skating when she was about three on a backyard pond that froze in the winter. “In Minnesota, everyone grows up on skates,” she said. That included her father, a speed skater, and her brother, who played hockey. She competed in freestyle, figures and moves in the field, but soon grew too tall (5′ 9″) for anything but dance. “I really enjoy the creativity of the dance,” she said. Azrojan began when he was five. “My mother wanted me to skate,” he stated. “A friend of hers had a daughter who skated.” After a successful early career that included three national championships in the Ukraine at the pre-junior level in singles, he switched to dance at the request of Linichuk.

Azrojan trained with Linichuk for three years in Russia before she moved to the University of Delaware. He rejoined her there when he began to work with Hyden, who had started working with the coach the previous year. Recently the couple moved to Colorado Springs, where they train with Christopher Dean and Dr. Rostislav Sinitsyn. Dean has choreographed their free dance to music and original dance which combines flamenco with a Spanish waltz. Tiffany enjoys skating to modern music, while Vazgen prefers the more classical style.

Off ice, Tiffany listens to rock, oldies and country music while Vazgen likes everything. Astor Piazzola is one of his favorites. Tiffany also plays the flute, the piano, and a little guitar. Among her athletic pursuits are snow and water skiing, horseback riding, tennis, and diving. She also enjoys sewing and fixing things around the house so much that her favorite television show is “This Old House.” Vazgen enjoys soccer and billiards. Both like to read, with Tiffany specializing in mysteries, especially books by Mary Higgins Clark, and Vazgen concentrating on historical novels.

Tiffany uses a computer for email, but doesn’t do much web surfing, while Vazgen said that games on Playstation are as far as he goes in technology. They both enjoy playing with their dogs: Tiffany’s husky/retriever mix named Mandy that she calls Woof and Vazgen’s boxer, Marquis. Tiffany also collects antique postcards to add to a collection that her grandmother started and left to her. The skaters also spend a lot of time together just as friends, often cooking Armenian or Russian dishes for one another.

The skaters have both traveled extensively. In addition to Armenia, Tiffany has visited Austria, Finland, France, and Russia, while Vazgen has been to China, Croatia, France, Israel, Korea, the Netherlands, Poland, Russia and the Ukraine. She would like to visit Sweden and Venice, while he would like to see Alaska. “My favorite place is the United States,” said Vazgen. “I really like it here. I also like going to Armenia because my roots are there. And I enjoyed visiting North Korea because it was very interesting and unusual.” Both cited going on a cruise as their favorite type of holiday.

Both dancers are looking forward to next season. “I want everyone to be shocked by how much we improve this season,” Tiffany stated. “We want the public to love us,” Vazgen added. Eventually they hope to skate in the Olympics, but they have not decided on any post-eligible skating. After they finish skating, Vazgen plans to be a choreographer. He is working on a degree in choreography from the Institute of Russian Theater. Both he and Tiffany teach skating to help pay for their training. Tiffany also works as a model and a waitress.

But Tiffany is far from being a stereotypical blonde. She is on an extended deferral from Cornell University while she continues to skate, but is a mathematics whiz. She attended mathematics courses at the University of Minnesota while she was still in junior high school through a special program for exceptionally gifted math students. Because she is fluent in Russian, she is able to communicate with her partner in that language. Azrojan also speaks Ukrainian but not too much English.

After the 2000 Worlds, Hyden and Azrojan were feted by the Armenians during a lengthy visit to the country. Accompanied by Vazgen’s relatives they met with members of the skating community and toured many historical sites. “I really enjoyed Armenia because the people are so great,” Tiffany stated. Since then, she has helped to improve skating in Armenia. After hearing how little access Armenian skaters have to skating equipment, Tiffany packed up all of her old skates and costumes and collected others from her friends to send to the children in Armenia.