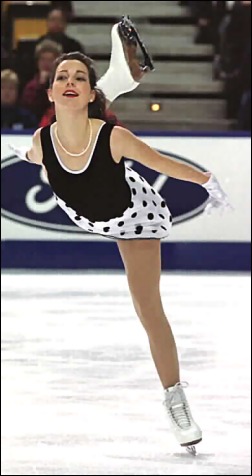 For figure skater Jennifer Robinson, representing her country at the Olympics is a dream come true.

For Canada’s Jennifer Robinson, representing her country at the Olympics is a dream come true, but it’s a dream that took a long time to fulfill. The under appreciated skater has now medalled in nine straight Canadian championships, eight in seniors, with five golds, a silver, and two bronze medals in ladies. That’s a record never reached by Elvis Stojko, Kurt Browning, Bourne and Kraatz, or even the legendary Barbara Ann Scott. But the 2002 Olympics will be her first. She was still a junior when Canada last sent a woman to the Olympics in 1994. The country did not qualify a lady in 1998. “”I always dreamed of going to the Olympics, but I didn’t know in what. I dreamed a lot of dreams and they all came true,” Robinson stated.

Robinson didn’t start out to be a figure skater. Her family’s history is in hockey. She’s a niece of National Hockey League defenseman Gaston Gingras, her younger brother Jason plays defense in the East Coast Hockey League, her father Cliff coaches youth hockey. “Our family is very close and we used to go to public skating in Windsor every Sunday ever since I was two. I really wanted to play hockey and so did my brother Jason, but my mom grew up in arenas with brothers who played hockey and she really didn’t want us to grow up in them too.”

Jennifer actually started her sports career in gymnastics, starting out about five and taking lessons until she was eight, but a trip to the Ice Capades changed her life: “I fell in love with the whole thing — the spins, the jumps, the speed, the excitement, the crowd, everything,” bubbles Robinson. She quit gymnastics and took some ballet lessons and some skating lessons at the St. Clair Shores Figure Skating Club in Michigan. But one day, the family car was involved in a huge 45-car pile up on I-94 and Louise Robinson decided to stay closer to home. They worked with coach Lori Lafferty-Vilneff at the Riverside Figure Skating Club. When it became obvious that Robinson had national-caliber talent, her mother and father sought out new coaches and found Doug and Michelle Leigh at the Mariposa Winter Club in Barrie, Ontario.

Robinson said that, “They’re like a second family. Michelle’s like my second mom, always fixing my hair and everything. I love where I am. They help me in the good times and they’re always there in the bad times.” If there is one person happier than Jennifer at the Canadians kiss and cry, it’s Michelle Leigh. Robinson says she’s a very family-oriented person and will be starting her own family this summer when she marries longtime beau Shane Dennison, a former pairs skater who now coaches figure skating. Jennifer plans to have a family but said, “I’m not going to get pregnant right away. My husband and I are both in the skating business so we can still see each other all the time even if I keep competing. I’m still young and I feel like skating for a few more years. I have a very competitive nature.” That showed when Robinson came back from second behind Annie Bellemare after the qualifying rounds and short program to win the free skate and the 2002 Canadians to secure the lone Olympic spot.

Jennifer is a very adventuresome soul, used to taking it to the limit. As a high school athlete, she took after her mother, a track and field athlete who specialized in distance running, the long jump, and the high jump. Jennifer ran the 800 and 1500 meters on her high school track team. She also played as a floater between forward and defense in soccer and loves to play baseball. She has already tried reverse bungee jumping and wants to learn to fly a plane and go skydiving, two very compatible skills. She likes to go camping, fishing, rowing, and canoeing, especially in the spring: “It’s really relaxing.” She also loves animals and hopes to have horses and a golden retriever like her old dog, Chip. Jennifer goes shopping, visit museums, and goes sightseeing when she travels to skating events: “If you want to go out and do things, you can make time. Vienna is the favorite place I’ve seen. We went to Mozart’s house and to the opera house for a Tchaikovsky concert.”

Robinson’s other interests include music and reading, primarily novels and mysteries. “My musical tastes are very eclectic,” she says. “I like Canadians like Tragically Hip, Tea Party, and Sara McLachlan.” Jennifer played the alto saxophone in her school band but always wanted to play the piano and the violin: “I’m definitely going to take lessons some day.” She prefers to skate to classical music. When devising her programs, Robinson says she and choreographer Lori Nichol “play around with the music and the steps until I really feel comfortable.” This year she used a flirty number, “Street Scene,” for her short program and Franz Liszt’s classical “Liebenstraum” for her free skate, dressed in a white costume reminiscent of a wedding dress.

Jennifer usually bolts onto the ice like a thoroughbred bursting from the starting gate. “I love to feel the wind,” she says. In warm-ups, she frequently slaps her thighs, especially after a bad jump. She said it’s her way of saying, “Wake up muscles. Come on, let’s go, It’s time to do it now.” Robinson explained, “I’m really into energy. I really feel through my hands.” When going for a jump, Robinson waits until the very last second before vaulting into the air right next to the boards, scaring the wits out of onlookers. “When I was young and just starting out, the other skaters went by so fast I was afraid I’d get hit, so I jumped in a corner by myself, near my coaches,” explains Robinson. “It’s not a matter of speed. It’s a matter of trusting myself. My lutz is really close to the boards because I’m trying so hard.”

Robinson has competed in every one of the Grand Prix events, with a personal best of third at Skate Canada in 1999. She has competed in five World Championships, finishing as high as eighth in Nice in 2000, and every Four Continents Championship, finishing ninth this year. But she said “I never come to a competition with a placing in mind. I want to do the best I can for myself and the audience. Performing brings out a different side of me. I used to be really shy.” Canadian fans would never know that. Robinson is a huge fan favorite, always cheerfully signing autographs, visiting hospitals, and publicizing the sport in Canada. Robinson has no realistic chance of winning a medal at the Olympics, but she has earned her way there. Now’s her chance to live her dream.