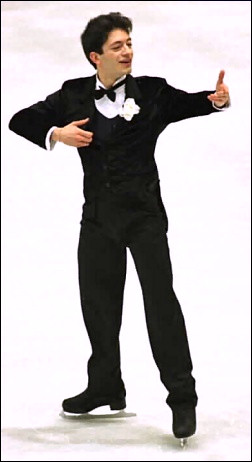 Italy has had lots of skiers, but few figure skaters in the Olympics. But in 2002, four-time Italian men’s champion Angelo Dolfini will be there. He qualified with a ninth-place finish at the Golden Spin in Zagreb. “My goal this year was to get to the Olympics and I will get to go this year,” Dolfini stated. “That’s already something I’ve accomplished. Now my goal is to get into the top 24 at the Olympics and Worlds.”

Dolfini skied before he skated. He didn’t skate until he was about eight or nine. He remembered, “I started skating for fun. It was something different to do during my holidays. I was skiing, but I was not very apt at it so I tried skating one day. It felt very comfortable for me. I wasn’t nervous like when I was skiing. I seemed to be inclined towards it.”

He began taking lessons from Petra Ruhrmann, who remains his coach to this day. “From the very start, he was the kind of boy who was always listening to me,” Ruhrmann remembered. “When I would tell him to do something, he would do it. No quarrels.” Dolfini trains six days a week for 2-3 hours a day, plus an hour of conditioning off ice. He took ballet classes for about four years, but didn’t have enough time. “I live over 40 kilometers drive from the rink in Milan, and I study at the university in another town, so I spend a lot of time driving,” he lamented.

Dolfini completed his first triple jump, the salchow, when he was 15. The triple toe loop is his favorite jump, while the lutz and loop are the hardest for him. He noted that he had tried the quad salchow and the quad toe loop, but that he was not actively working on the jumps. Dolfini has been working more on his presentation skills in recent years. “Everything is important in the program, not just the jumps. I like jumps very much, especially when the program works well with the jumps. But I think the artistic is part of the job. I like to have nice steps, deep edges, good moves. I put the jumps into the program. I don’t do the program to fit the jumps.”

“Opera music is my favorite,” Dolfini noted. “I have been more inclined to do slow stuff. But I wanted more energy, more power this season.” For his free skate, Dolfini is using “I Pagliacci” and “Vesti La Giubba” by Leoncavallo. “My free program is the same as last year’s,” he explained. “I chose the music three or four years ago because I wanted it for the Olympic year. Then I wanted to do the program for two years and improve it. I had to have a program in good shape for Zagreb to qualify for the Olympics and there wasn’t time after Worlds to develop a new free program and have it ready so early.”

“For the short program, my choreographer (Luca Mantovani) came up with the flamenco music. I wanted to do something really different from the free and I needed something that would give me a good second mark. I like acting out a story or dancing when I skate. The short program is more dancing, more energetic.” Dolfini is using “Tango Flamenco” by Armik for the short.

Off ice, Dolfini likes lots of kinds of music, but said he prefers “very different music than I use in skating. I like alternative music, hard rock, heavy metal, Limp Biskit, electronic music, reggae like Bob Marley, some jazz, and ethnic music from the Balkans. There’s a band that plays with trumpets and a lot of percussion.

He likes to read and especially enjoys Borges, a writer from Argentina. He also enjoys perusing Zen, oriental philosophy, and Nietzsche. “I also love the Lord of the Rings and am waiting for the Italian version of the movie to come out,” he added. Two of his favorite pastimes are playing video games, especially role-playing games, and going with friends to movies or the theatre, an area in which he hopes to work someday. Dolfini is currently studying modern and Italian literature at the University of Pavia. “I’m in my fifth year of studies and will have a couple more after this year,” he noted. “Right now I’m studying different things, but I’ll have to focus on the technical part if I want to work in the theatre.”

Dolfini has a stamp collection, which was started by one of his relatives but noted that he was not passionate about it. He keeps a lot of the stuffed animals he receives, including a large frog and some tiny ones he received at the Italian Nationals, but admitted that he gave some of them away to girls. He just got a computer for Christmas but hasn’t used it for much except for email.

For holidays, he likes to “go to the seaside and do nothing.” Since his mother is from Sardinia, he likes to visit the island. “It’s very different there. I smell the flowers and I feel at home.” He’d like to visit China and Africa someday, especially Kenya and Tanzania. One of his favorite skating-related trips was to the Worlds in Vancouver, Canada. “The Canadian public supports skating very well,” he said. “There were so many people. You get great energy to go on in your program. When you start, you are focused on what you have to do, but at the end, it’s a big surprise when you realize how many people are there.”

Dolfini doesn’t plan to be involved too much in the skating world once he finishes his competitive career. “I’m not planning to be involved. I don’t want to coach or judge. Maybe I’ll do some shows, but I can’t find the same feelings as in the competitions,” he said. “There’s no strong emotion as when you are competing.”