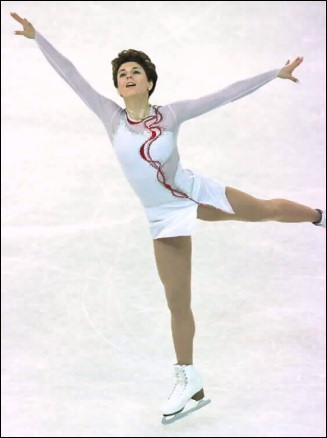 When opportunity knocked, Hungary’s Julia Sebestyen was ready. After Krisztina Czako’s seventh place finish at the 1997 Worlds gave Hungary two ladies spots at the 1998 Olympics, the three-time Hungarian champion was injured and could not compete. That gave Sebestyen an opportunity to skate at the 1998 Olympics in Nagano where she finished a respectable 15th. “Japan was an interesting experience, but I was there for too long,” said Sebestyen, who comes from a small town where she can walk to the rink. “I did watch the skiing since Hungary was in the chase for the medals.” She’ll be going again to Salt Lake City this year, but doubts that she’ll stay for 2006 and stated that she is not thinking of a professional career in skating.

With four silvers and a bronze at Hungarian Nationals, one of Julia’s major goals is “to become champion of Hungary, because there are a lot of girls competing for the top prize,” she said. She has always skated well at the European Championships, finishing sixth from 1999 through 2001, although she dropped to tenth this year. In 1999, she actually finished second behind Maria Butyrskaya in the free skate, jumping to sixth overall after placing 11th in the short. Sebestyn has won gold medals at the Hungarian Trophy and the Otto Nepela Memorial in Slovakia, silver at the Golden Spin of Zagreb and the Karl Schafer Memorial in Vienna, and bronze at Skate Israel. At the 2000 Worlds, she was third in the qualifiers and seventh in the short, but only ninth in the free skate, finishing seventh overall. This season, she finished sixth at Skate America and fifth at the NHK Trophy.

Sebestyen, who is only 20, started skating at four when her parents took her on an outing to a famous outdoor rink in Tiszaujvaros, Hungary where there was ice all year long. Since she had a talent for it, she began taking lessons. Because there were no pairs in Hungary, she saw only single skating and had no desire to do pairs or dance. “I like everything about skating, but especially the jumps and spins,” she said. By eleven, she was landing a triple toe loop and a triple salchow. Julia had a triple lutz/double toe combination in her long program this year as well as a double Axel/triple toe. The triple loop is the hardest jump for her.

Julia trains for about four hours each day on ice in the summer and two hours a day in the winter. Due to lack of ice in Hungary, she has to train elsewhere in the summer. Over the past four years, she has trained in Russia, Slovakia, Sweden, England and the United States during the summer. Training has become more difficult since the ice rink in Budapest burned down in 2000, forcing Sebestyn to train at an outdoor rink in a city park. Lack of training time was a prime factor in her drop to 18th at the 2001 Worlds. Julia also trains another hour off ice every day doing balletics, gymnastics or running. In the summer, she swims at the beach. She started doing gymnastics at four, but for conditioning, not for competition.

Sebestyn now trains with former Hungarian champions Andras Szaraz. Ipakjan Jeranjak, a professional ballet and skating coach, choreographed her programs in prior years but she now uses Nina Petrenko, wife of Olympic champion Viktor Petrenko. Julia likes to skate to lyrical music but listens to “whatever is pleasant to hear” off ice. This season, she is using the adagio from “Concerto de Aranjuez” by Rodrigo in the short and “The Man in the Iron Mask” soundtrack for the long.

To relax, Julia enjoys reading, especially action books, and likes to see the newest top movies, but said that mostly she likes to enjoy nature. She enjoys traveling but said she is away from home too much and misses her Siamese cat, Cici. Two of her favorite trips were to St. John in Canada, where she competed in Junior Worlds in 1997 and Skate Canada in 1999, and to Australia for the Junior Worlds in 1995. “I was amazed that in so small a place they could organize so fantastic an event,” she said of St. John. “The people and the atmosphere were great.” She explained, “Australia was very different from Europe. I liked the hot summer and I saw kangaroos and koalas.”

Since she is still in school, Julia spends much of her free time studying because she plans to go to a university and study economics. She has learned to work with computers and to use the Internet and school and said that she’s working on her own home page. Julia is also studying English and understands some German as well as her native Hungarian.

Julia is a very practical young lady, who doesn’t have much time for shopping. She tries to concentrate on her schoolwork and her skating. “When I’m trying to do something, I concentrate on facts, not dreams,” she said. That’s a good motto for a future economist.