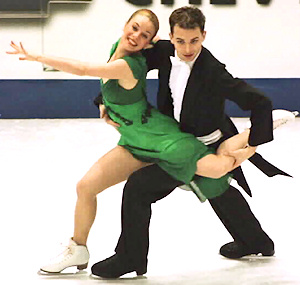 With the increased revenues resulting from the televising of many international skating events, many countries that have not been traditionally strong in figure skating have expanded their programs. Poland, which has had several strong singles competitors, now has several contenders in ice dancing. One of the newest teams to compete internationally is that of Alexandra Kauc and Filip Bernadowski, who were both born in Lodz, just four days apart in October.

The couple started dancing together in 1998, after both reached Junior Worlds with other partners in previous years. Bernadowski formerly competed with Karolina Dobrodziej, while Kauc had teamed with Michael Pryzk and Krzysztof Tomczyk. The dancers finished eighth at Junior Worlds in both 1998 and 1999 before moving to seniors in 2000, where they finished third at Polish Nationals. They medal earned them a trip to the World Championships, where they finished a respectable 17th. In 2000, they skated at their first Senior Grand Prix at Skate Canada in 2000, finishing eighth. This season, they were in second place at the Polish Nationals but Kauc injured her knee, preventing the couple from competing further during the season. With Sylwia Nowak and Sebastien Kolasinski expected to retire after this season, the young pair will become Poland’s top ice dancers.

Both skaters began the sport when they were five. Kauc first went skating because her best friend’s mother took both girls to the rink to play. She took to the sport immediately and competed for a few years in singles, but didn’t really enjoy it. “I didn’t like to jump and fall,” she said. “I preferred to show some skating.” When she was eleven, her coach asked her to try ice dancing, and she’s been a dancer since then.

Bernadowski’s mother, Bozena Bernadowska, is a figure skating coach, so it seemed natural that he should follow her onto the ice. But his first love was tennis, which he began playing when he was three. After a few years, his mother told him that he couldn’t go to tennis lessons so often; he decided to concentrate on skating. He quickly decided that he didn’t like jumping. “It’s full of pain,” he noted. So he went into ice dance. Kauc and Bernadowski had known each other for ten years before their former partners both quit at the same time and they formed a partnership setting as their main target the goal of participating in the Olympics in 2006.

Maria Olszewska-Lelonkiewicz coaches the dancers, with choreography by Natalia Dabadie and Krystyna Ruszkiewicz. Because both of the dancers have to spend many hours in school, they train for only about four hours a day three times a week on ice, supplemented by running on other days. In the summer, they also do ballet and other dance choreography classes. Both skaters have studied ballet for about ten years.

Both the quickstep and the jive are among Kauc’s favorite dances, while Bernadowski prefers the tango. “It’s a good dance for men,” he said, adding that he doesn’t like waltzes. For the free dance last season, the dancers used songs from the musical “Notre Dame de Paris.” “It was a difficult dance but with most intricate steps,” noted Kauc, who played Esmeralda. “I like to play a role like an actress.”

Off ice, Kauc loves all kinds of dancing. “I could not live without dancing,” she laughed. She also enjoys reading biographies and detective stories, going to the movies, or just resting at home, listening to music. “I fell in live with folk music this year,” she said. “I like all kinds of music, but mostly folk and jazz.” Bernadowski’s passions are skiing in the winter and sailing in the summer. He also enjoys hanging out with friends, reading political and crime stories and travel books about sailors, and playing with his dog. His musical tastes are varied, including movie soundtracks, classical music, and Metallica.

Both skaters love to travel. Bernadowski’s favorite trip was to Korea for Junior Worlds. “I liked the Oriental foods and all the small shops. It was very different from Europe,” he said. Kauc preferred her trip to Junior Worlds in Brisbane, Australia. “I loved the exotic atmosphere and all the strange animals like kangaroos. And I visited my aunt in Melbourne.” Among the places she hopes to visit one day are Egypt, South Africa, Iceland, Greenland and Alaska.

But for now, the skaters must continue their education. Kauc is in her first year studying psychology and physical education at the university, trying to decide whether to become a coach or a psychologist. Bernadowski is interested in politics and international relations, so he’s studying diplomacy, hoping to finish within the next two years. Both are also working hard to improve their English.