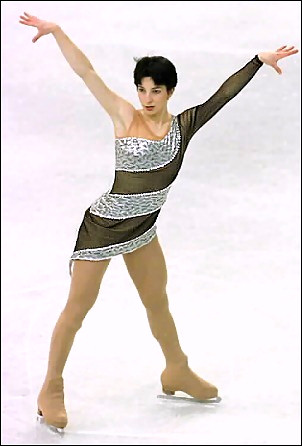 Mojca Kopac will be representing Slovenia at the 2002 Olympics in Salt Lake City as one of the small European country's few world-class athletes.

Mojca Kopac will be representing Slovenia at the 2002 Olympics in Salt Lake City as one of the small European country’s few world-class athletes. The skater earned a trip to Salt Lake City with a strong skate at the Golden Spin of Zagreb in November, where she finished eighth. After finishing 14th at the 2000 Europeans and a disappointing 31st at the 2000 Worlds in Nice, Kopac had not competed in the 2000-2001 season, deciding instead to concentrate on her university studies. But the lure of the Olympics proved to great to resist. The results really don’t matter to her. “I just want to skate well and land at least five triples in my long program. I never think about the results but I’m disappointed if I don’t skate clean,” Kopac noted. She was consistent at the 2001 Europeans in Lausanne, Switzerland, finishing 14th in the short, long, and overall.

Kopac recalled, “It was really a coincidence that I learned to skate. My grandmother took me to the rink because I had a lot of energy and she wanted me to do something useful. The founder of the skating club saw me skating and told her he wanted me to join.” There were no coaches for pairs or dance in Slovenia and not many male skaters, so Mojca never had the chance to try anything but free skating. But that suits her just fine. “I like to skate and perform for people using music and I want to depend on myself, not a partner,” she said.

Kopac is known for her unique style. “It’s better to be yourself than be a bad copy of a good skater,” she explained. She also uses some unusual music. “My coach and I select the music and it’s important that I like it and feel good about it. I like modern music from movies like Pulp Fiction that I used one year. I don’t like classical music. I like music that makes you dance, music that is different from the others,” Kopac continued. This year, she is using “Nomad,” an ethnic Australian piece in her short program and “Quidam” for the free skate.

Kopac’s choreographer is Uschi Kezler, with whom she trains during the summer at IceWorks in Aston, Pennsylvania. “I worked with Uschi last summer, trying to combine my jumps with better choreography,” Kopac explained. “Although I’ve been with my coach (Marina Pirkmajer) for over ten years, I only started with Uschi a few years ago.” Kopac trains only for about 16 hours a week on ice and three hours off ice, but she has already mastered most of the triples and has a triple lutz/triple toe loop combination in both programs. “I don’t like the double Axel and I’ll never do a triple Axel,” she stated emphatically.

Kopac plans to retire soon. “I’d like to try shows or something else where I could skate without the pressure of judges, just for fun, for the skating itself.” But she has already embarked on her studies at the university for a degree in journalism. “I want to be a sportswriter because it’s such a dynamic job,” she continued. With a fluent command of English and some German and Russian, she has a good start towards that career. She’s also learning how to use the computer to do research and send email and can surf the Internet. “I was really surprised when I saw a home page about me. It was very nice,” she said.

To relax, Kopac writes stories. “True stories,” she explained. She also reads novels, especially mysteries, and listens to different kinds of music depending on the mood she’s in. She lives with her parents and two pet dogs and collects all kinds of stuffed animals except teddy bears. “I like to play soccer, but no one wants to play with me because they say I’m too dangerous,” she laughed. She also plays volleyball and used to roller-skate. “I competed until I was around ten, but then I quit,” she said.