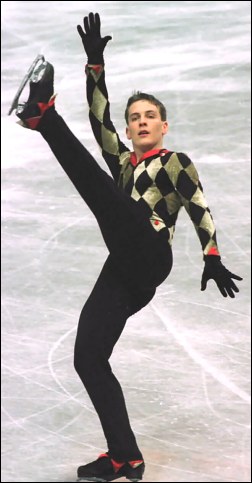 Switzerland's Patrick Meier was born into the figure skating world.

Switzerland’s Patrick Meier was born into the skating world. His mother, a skating coach who had competed in small competitions, started him skating when he was six at an open outdoor rink in his hometown. He once thought about doing pairs, but lack of partners and the difficulties involved in organizing practices dissuaded him. Dance never interested Meier. “It’s too boring without the jumps,” he said. “In freestyle, you have to do jumps and spins, show flexibility and skate with expression. There are so many top skaters, that it’s important what else you’re doing in addition to the jumps.”

Meier landed his first triple jump, a salchow, when he was 12, but didn’t start landing the triple Axel for several more years. In 1995, he became the first Swiss skater to land the jump at the Karl Schaeffer Memorial in Vienna, where he finished second. The triple Axel remains his nemesis, sometimes disappearing when he needs it the most. But he has still progressed steadily at Europeans, reaching the top ten for the first time in 1999. He has finished between 20th and 25th at Worlds in the last four years and was 22nd at the 1998 Olympics in Nagano.

“I thought I would stop after the 1998 Olympics, but when I went there, it was very motivating to do another,” he said of his Olympic experience. “It’s quite different from anything else. It was great to compete with the best, but it’s very hard to concentrate. You really have to go once just to see and experience everything and not care about a placement. Then the second time you can go and concentrate on your sport. I was glad that the men finished early. I went to see a lot of other sports and had contact with a lot of other sportsmen, to find out how they train.”

The five-time Swiss champion travels to five or six different rinks to train. Fortunately, the Swiss federation has given him a convertible to make the frequent trips. He trains 15 hours per week during the season and 15-20 hours a week in the off-season. “In the summer, it takes more time to develop and polish the new programs,” he explained. He spends another five hours a week off ice, running and lifting weights, and takes a lot of dance classes in the summer.

Meier has competed all over the world, including Australia, Austria, Canada, the Czech Republic, Finland, France, Germany, Great Britain, Israel, Italy, and Japan. “The best competitions are in Canada and the United States,” he stated. “People are crazy about skating there. It’s always special even in practice. That makes it easier to compete.” Meier had hoped to regain the Swiss championship, make the top ten at Europeans, and compete at the Olympics after earning a spot for Switzerland in Vancouver with his best finish, 16th in 2001. But he was injured most of the season and Stéphane Lambiel’s fourth-place finish at the European Championships cost Meier his chance.

Each season, Meier selects the music for each program in consultation with his coach and choreographer, Christina Persico. “I like to be creative, to skate to new music which hasn’t been used too much, but sometimes it’s difficult to find. I have an idea about using cello music for the long program,” he noted.

Off ice, Meier likes Swiss and German pop music and bands like the Red Hot Chili Peppers. He likes to hang out with friends outside of skating. “It’s important to have contact with the normal world,” he said. He goes to the movies to see action movies and “movies with more difficult themes and reads a lot, mainly fantasy like Tolkien’s Lord of the Rings. Meier collects some skating pins, but nothing else. He donates the stuffed animals he receives to orphanages and children in his family. After the season, he enjoys snowboarding and volleyball and often goes to the beaches in the south of France in the summer. “I never travel to cities for holidays,” he said. “I go to nature. Holidays are for quiet and relaxing. I have enough to do in my life.” That includes studying the law in university, where Meier is in his third year.

“There are a lot of possibilities in Switzerland if you study the law,” he explained. “You can go on to further study of law or work in business. As a result of his studies, Meier speaks English, French, and German and understands some Italian. Since he uses a laptop computer for studying and research, Meier has access to the Internet, where he views skating news and fan pages, as well as using email. He plans to do an official home page as soon as he has time.