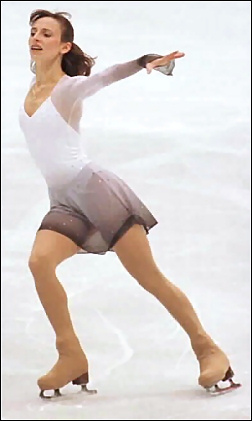 Tatiana Malinina has been very successful in the last few years competing against younger figure skaters.

Don’t tell Uzbekistan’s Tatiana Malinina, a two-time Olympian, that she’s too old to compete. “Age has no meaning whatsoever. Some skaters become champions at 15, others achieve this later on. There is no age limit for competitions and I can skate until I’m 40 if I want to. I don’t have problems with my jumps and I’m winning against the younger competitors. And by the way, I look like I’m 16, and I’m skating that way,” she emphasized. Even at the age of 29, Malinina is still a few months younger than Russia’s Maria Butyrskaya.

Malinina’s been very successful in the last few years competing against younger skaters, winning the inaugural Four Continents Figure Skating Championships and the 1999 Grand Prix Final in successive weeks, making her the first skater from her country to win an international medal. She also won the NHK Trophy, Skate Israel, and the Asian Winter Games. The Uzbek national champion has never lost in her home country, winning ten straight titles. Although she failed to make it through qualifiers in her first Worlds in 1993, she has made it every year since, rising as high as fourth at the 1999 World Championships. She finished eighth at the 1998 Olympics and fifth at the 2001 Grand Prix Final. This season, she made the Grand Prix Final again after winning the NHK Trophy and finishing sixth at the Sparkassen Cup on Ice. She finished sixth, but had an enjoyable time in Canada. “I always hope to win but I don’t think about a placement,” she said. “I just want to skate well and the judges judge.” Malinina withdrew from the 2002 Olympics with an injury after finishing 13th in the short program, but still enjoyed her Olympic experience.

Tatiana started skating when she was six, at a time when she was also taking ballet and gymnastics classes. Although her mother was a gymnast, Tatiana gave up gymnastics after a few months to concentrate on skating, the sport in which her father had competed as an ice dancer, but her ballet studies continued for a few more years. She first saw skating at an ice rink when she was four and convinced her mother to let her try it. The petite skater said she tried pairs but noted, “I really like to jump and only in singles can you do many jumps. I like all the parts of skating, but I like jumping best. My favorite is the lutz and the hardest is the salchow.” She does both triples, in combination with a double toe, in her long program.

In 1998, Malinina and her husband, Roman Skorniakov, whom she married in January 2000, moved to Dale City, Virginia to train. “I like America very much. It was difficult to come to America, but easy to stay,” she laughed. She enjoys the improved facilities in Virginia. “I used to train six days a week, twice a day for an hour and a half, but during the season I don’t train as much.” She also helps Skorniakov with his jumps and spins and coaches a lot of younger skaters. Malinina graduated from the Siberian Academy of Physical Culture and plans to continue to coach after she finishes skating this year. “I love coaching. It’s even more fun than skating for me now, she said.”

Dr. Rostislav Sinitsyn is her choreographer. This year she is using “Song from a Secret Garden” by Rolf Lovland for the short and “Sweet Sorrow,” a violin concerto by Henry Vieuxtemps for the free skate. Malinina was shocked when she learned that she would be in the Grand Prix Final, exclaiming that she didn’t have a second program. So she reprised one of her favorites, “Aladdin” that she has used for the 1998 Olympics free skate. She says she picked the music because “I’m a girl from an Eastern country so I picked an Eastern theme for the Olympics, to represent my country.” She prefers to skate to Latin and Spanish music. Off ice, she enjoys “all styles of music that are good music” and cited Madonna as a favorite.

To relax, Malinina reads novels and listed “Gone with the Wind” and “My fair Lady” as favorites. When she was younger, she used to go to dance clubs a lot but now prefers to stay at home, cooking, doing needlework, and other household activities and playing with her cat Musya. She also designs her own costumes. In the summer, she plays soccer, basketball, and badminton. “I like tennis but I don’t play very well,” Tatiana added.

“I’m also studying English because I like it,” she stated. “I know a little English, a little German and a little Japanese. I love Japan. I’ve been there at least ten times.” For vacations, she usually likes to go home and see her family or just stay at her home. Her hobby is collecting figure skates, not the real ones, just glass or crystal ones.