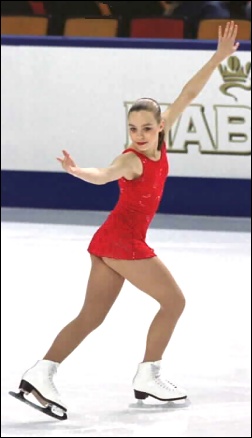 One of Canada's promising junior figure skating ladies is Signe Ronka from Toronto.

One of Canada’s promising junior ladies is Signe Ronka from Toronto. The talented youngster was born in Riga, Latvia, and moved to Canada when she was three. She has qualified for national competition each year she was eligible, finishing fifth in Juvenile Ladies at Tomorrow’s Champions in 2000, ninth in Pre-Novice Ladies at the 2001 Skate Canada Junior Nationals after being injured during the long and third in Junior Ladies at the 2002 Canadian Nationals. In her first visit to the big show, she attained her goal for the season of placing in the top five and making the Junior National Team. Ronka had one previous international assignment, the 2001 Junior Grand Prix Trofeo Rita Trapanese in Milan, Italy, where she finished seventh. That trip was her favorite so far, but she hopes to travel to Paris and return to Latvia someday.

Ronka has only been skating for five years, since she was eight. “I didn’t know how to skate and one day I got a letter in school saying we could go to this club to learn how to skate. So we went to the club with my brother and tried it,” she said. Even though, there were no previous skaters in her family, Ronka was a natural skater. She likes skating fast, flying across the ice, and especially jumping. She landed her first triple jump, a triple salchow, during the summer of 2000, and had soon mastered all of the triple jumps. “My favorite jump is the triple loop and the hardest is the triple Lutz,” she noted. Ronka is already landing a triple toe/triple toe combination and is planning on adding a triple lutz combination, hopefully a triple-triple for next season.

Ronka currently trains at the Toronto Cricket and Curling Club with coach Ellen Burka, who also choreographs her programs. She trains for three hours on ice six days a week and an hour off ice three times a week. That includes cardiovascular and strength training and stretches with a trainer, plus ballet. She started ballet two years ago. Ronka also used to play competitive soccer, but Burka selects the music for Ronka’s programs, which included “Gypsy Fiddles Playing” for the short and “Dance of the Flowers and “The Siege of Corinthe” for the free skate. Ronka, who plays the clarinet herself, enjoys skating to classical music. She listens to “Destiny’s Child, Pink, Shakira, and other popular rock artists off ice. For the 2002-2003 season, Ronka is planning to use a Hungarian dance for the short and “Giselle” for the long.

Ronka is not sure how long she will continue to compete, but hopes to stay in the sport long enough to try and become world and Olympic champion. She plans to compete at least until the 2006 Olympics. But she isn’t planning to stay as a coach after she finishes. She plans to attend the university and become a lawyer because she “likes solving people’s problems.” She is currently a student at D. A. Morrison Junior High, where her favorite subjects are mathematics, science, and gym.

For fun, Ronka likes reading, shopping, video games, and other sports including ping pong, darts, badminton, and cross country running. “I used to play competitive soccer but then started skating and slowed down the soccer,” she said. She played midfield/forward. Her favorite books are mysteries while her favorite movies are comedies. She collects coins and Beanies Babies and has a pet cat named Mincis that she calls Mickey.