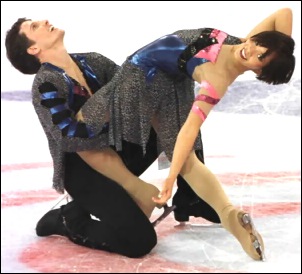 For the last five years, Megan Wing and Aaron Lowe have been the third best ice dance team in Canada.

Change is glacially slow in ice dancing. For Canada’s Megan Wing and Aaron Lowe, it sometimes seems that change will never come, but they continue to persevere. For the last five years, they have been the third best dance team in Canada and for the last four years, they have been the fourth best dance team at the Four Continents Championships until this season where they finished third. But they continue to improve, getting their highest marks yet at the 2002 Canadian Nationals.

Megan started skating for fun at age 5, but made a lot of friends at the rink and skated singles until she was 14, when she decided she liked skating with a partner better. Aaron began playing hockey when he was 7, but switched to figure skating when he was 9. He liked winning but he couldn’t jump well so he switched to dance. The couple met when a coach asked Megan to partner Aaron for dance tests since she was two dances ahead of him. The couple clicked and he moved to Sunset Figure Skating Club to skate with her. Now they have been skating together for 15 years. “We’re planning to stay eligible for as long as we can,” said Lowe, “at least until the 2006 Olympics. The last Olympic dance champions have all been older couples.”

The dancers’ best year was in 2000, when they competed at the 2000 World Championships in Nice, where they finished a respectable 15th. “Our first Worlds experience sure was memorable. Being a part of such an elite team and building such good friendships with all the team members was the highlight of our championships. Also to be around all that action that took place all week was exhilarating, a constant roller coaster of emotions all week,” Lowe stated.

The dancers have competed in all of the Four Continents Championships, but failed to medal, coming in fourth for four straight years. They have skated in every Grand Prix event except Germany’s, finishing sixth at both Skate America and Skate Canada in 2001. Other than Worlds, their favorite competitions were St. Gervais in 1995, where they won their first international gold medal and Skate America in 1996. “We had a real close team there with a lot of long-term friends – Jennifer Robinson, Jeff Langdon, Marie-Claude Savard-Gagnon and Luc Bradet, “Lowe explained.

Wing and Lowe have been on the Canadian podium for five straight years, with a silver and four bronze medals. Hoping to become more competitive, they moved to the Detroit Skating Club in 1999, where they are working with Igor Shpilband, Marina Zueva and Natalia Annenko. Wing stated, “It’s always risky changing coaches, but Igor is always pushing us to do new things. He has a way of skating that emphasizes edging and movement in relation to each other. The steps he gives us are way more intricate than what we’ve done before.” “It’s exciting to have new coaches,” Lowe said. “We expect to spend the rest of our careers here if possible.” They train for 3-4 hours on ice and another 1-2 hours off ice each day.

Shpilband choreographs the couple’s dances. This season, they used “Fiesta Flamenco” and “Verano Porteno” for their Spanish medley original dance. For their free dance, they used three pieces of music by Supreme Beings of Leisure: “Last Girl on Earth,” “Truth from Fiction,” and “Strangelove Addiction.” “Igor picked it because the first piece we came up with was not to his liking. He felt a little uncomfortable trying to choreograph it effectively. It was a lounge type piece of music. Igor also chose the original oance music which turned out to be a great success,” Lowe stated.

He noted that the couple “had a lot of input into the dances. We experimented with a lot of different moves, trying to make them more difficult. We worked a lot on intimacy, connections and transitions.” Wing added that “our first few years, we didn’t do too much on our own. But each year, we added more and more. If you leave everything up to a choreographer, it’s not you. You’re totally like robots.”

“Having choices in what we perform is my favorite thing,” Lowe noted. “We like to try different things all the time, different rhythms and styles,” Wing echoed. “Sometimes it’s hard doing the compulsory dances because they aren’t the same as they are on the ballroom floor,” she said. “There’s a different way of expression. For instance, the rhumba is not really a rhumba.” Aaron noted that “We have to work extra hard on some of the dances. The Argentine Tango and the Tango Romantica are challenging. Tangos are probably the hardest. We excel at the quicker dances.”

The dancers liked the changes in ice dance rules. “I think the changes are good,” Lowe stated. “The judges have to watch closer to compare. The straight line footwork sequence really shows the differences between the couples.” Wing added that “the more you highlight specific elements, the easier it is for the judges to be objective. And the changes make things fresher for the ice dancers.”

Both of the skaters are actively involved in promoting their sport. Wing is an athlete representative on the Skate Canada Board of Directors and serves as a member of the National Teams Committee. Lowe is a member of The Skating Events Trust (TSET) and is an athlete representative to AtletesCan and the Canadian Olympic Authority Athletes Council. During the 2001 World Championships in Vancouver, they served as athlete ambassadors for the organizing committee.

After they finish competing, the dancers hope to open a dance training facility in Vancouver. “The west has been lacking in dance,” Wing explained. “We want to have a facility where we could teach everything all in the same place.” “It’s a vision we both have,” Lowe agreed. “We’re both studying to get degrees that will help. I’m studying leisure and sports management and human kinetics and Megan’s studying psychology.” Both skaters are third-year students at the University of Windsor and hope to complete their studies next winter. During the summers, they conduct seminars to earn funds for training, although they have cut back on their coaching to concentrate on finishing their last year of school. Fortunately, Centrum also helps sponsor the young couple.

Off ice, Lowe spends a lot of time working on his computer and has helped design the couple’s home page. He listens to a variety of music including country music, but no heavy metal. Garth Brooks is one of his favorites. He’s also a big movie buff and reads a lot, especially books on sports “with something mental about it,” he said. Lowe’s a big basketball fan who played guard for two years in high school, before having to choose between skating and basketball. He’s also a great tennis player and was ranked provincially in British Columbia. Wing spends a lot of time doing things outside during the summer. As a child, she did a lot of swimming, gymnastics, ballet and baton twirling. She still swims and plays tennis.