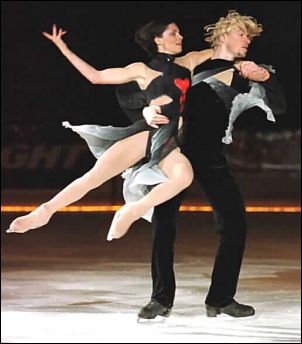 Isabelle Delobel and Olivier Schoenfelder perform at Miracles of Gold.

With the departure of Marina Anissina and Gwendal Peizerat from the ranks of eligible skaters, Isabelle Delobel and Olivier Schoenfelder became France’s highest ranked senior dance team. The dancers recently returned to France to train in Lyon with Muriel Boucher-Zazoui after spending the last two years working with Tatiana Tarasova and Nikolai Morozov. Last season, they trained full-time in Newington, Connecticut, with Tarasova and Morozov but decided to return to France after the Olympics. “We didn’t feel comfortable training in the United States,” Delobel said. “We felt better training at home in Lyon.”

The dancers had a rough season in 2001-2002. Although they started out strongly with a bronze medal at Skate Canada, they were only fifth at Trophee Lalique. Then disaster struck when Delobel tore an abdominal muscle during a lift in practice at the French Nationals in December. They were forced to withdraw before the original dance after leading the competition through the compulsories. Delobel remained off ice for six weeks, forcing the couple to miss the European Championships.

Although they realized a life-long dream by skating in the Olympics in Salt Lake City, they were still not at full speed and finished only 16th, after hoping for a top ten result. The 2002 World Championships in Nagano, Japan, provided more challenges when they fell in the opening compulsory dance, the Golden Waltz, and had to fight back form 15th to reach 12th place overall, their second-best result at Worlds, where they have competed since 1998. The couple twice finished in the top ten at Europeans and hope to reach the top ten at both Europeans and Worlds in 2003. They also hope to win the French Nationals, after winning two silvers and a bronze in previous years, as well as the French junior dance title in 1996, the same year that they finished second at the World Junior Championships.

Isabelle began skating with her twin sister, Veronique, and her brother, Laurent, when she was six. They did freestyle for a year before starting dance. Both Isabelle and Laurent wanted to do pairs, but it was easier to find coaching for dance. She danced with Laurent for three years before her parents decided they couldn’t afford lessons for everyone. Both Isabelle and her sister continued training in dance, and still compete against one another at French Nationals every year, with Isabelle besting her sister and her partner each time.

Delobel later moved to Lyon and was matched with Schoenfelder by coach Lydie Bontemps. Schoenfelder had begun skating at eight after his mother took him to see the Duchesnays in an ice show. Within six months, he was already concentrating on dance. “There were too many jumps and other things required to do freestyle,” he said. “Dance is better for expressing yourself. I must feel free to skate.”

“We are a good match because we have different character,” Delobel stated. “I’m very excitable, but he is calm. I’m the fire and he’s the ice.” “It makes a very good mix,” Schoenfelder added. “She’s a very good skater and we fit well together. Isabelle has very good technique, but sometimes she’s very nervous and I calm her down. Sometimes I’m too slow, and she makes me go faster.”

The dancers train from three to four hours on ice every day, more earlier in the season. They also work about two hours off ice with balletics and weight training in the summer. “I did ballet before skating,” Schoenfelder noted. “My mother was a ballet instructor.” They also work with a French ballroom dancing instructor to try out moves on the floor before moving them to the ice.

After working with Tarasova and Morozov since 1998, the dancers are now looking for a new choreographer. Morozov choreographed both their original dance and free dance this season. The original dance included a flamenco and a paso doble, while the free dance was to “Vivre pour le meilleur” by Johnny Hallyday. They will have a new free dance in 2003. “We’ll keep some of the moves and steps from this year,” Schoenfelder said, “but we don’t want to use the same music.”

For the compulsory dances, Isabelle prefers the Golden Waltz and the Tango Romantica. “I don’t like bouncy dances,” she explained. “These dances are harder, but you can still make an interpretation.” Olivier likes the Golden Waltz, the Argentine Tango and the Blues. “I like the Blues because it’s smooth and very different from the waltzes,” he said.

Both skaters have finished their university training in science and sport and are now coaching. They expect to continue coaching in the future, although they have considered becoming professional skaters if they win a major competition. The dancers already skate on the French tour every season after Worlds. “We definitely plan to compete until the 2006 Olympics,” Schoenfelder stated.

Their favorite skating trip was to Australia for the 1995 Junior Worlds, where they finished fourth. “It was always my dream to go to Australia,” Delobel said. “We stayed three weeks but wanted to see more. We saw the strange animals and I held a koala. I was surprised by how heavy they were.” For holidays, Delobel goes to the beaches in the south of France, while Schoenfelder goes to the beach in the summer and the mountains in the winter. He likes to ski and snowboard. Someday he hopes to travel to Hawaii. Schoenfelder’s other sports interests include soccer, funboarding, and paintball, while Delobel sometimes does rhythmic gymnastics. Both skaters also rollerblade.

To relax, Schoenfelder sometimes paints small figurines and listens to music. “I prefer ballads to techno,” he said. Delobel enjoys shopping, cooking, going to the theatre and photography. She has a room full of stuffed animals and collects owls especially. “I listen to all kinds of music except rap,” she said.