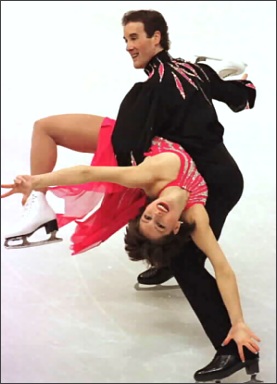 For ice dancers Beata Handra and Charles Sinek, making the Olympic Team was much more than a dream come true.

To the U.S. ice dance team of Beata Handra and Charles Sinek, making the Olympic Team was much more than a dream come true. “I never thought it would happen to me, and when it did, I was in disbelief!” exclaimed Handra. “I kept having to pinch myself! I was still at the stage where I couldn’t believe that I had a partner and that I had made it to Nationals! But to make the Olympics? I was never one of those kids that said, ‘I’m going to the Olympics someday.’ Making the team didn’t seem realistic at all until maybe a year or two ago.”

Sinek had a feeling when he reinstated in 1995 that he would have a chance at going to the Olympics. “When we made the team, I was happy that I beat the odds due to the injuries as well as the belief that people may have had that I was pushing the age limit,” said Sinek who had underwent knee surgery last August. Sinek suffered from complications (a blood clot in his calf) and was off the ice for over two months. “That’s why we missed our two Grand Prix competitions,” Sinek pointed out. “On top of that, I tore my meniscus a second time in September – probably from returning to the ice too soon. In addition to the injuries, I felt that some people might have forgotten that I had competed just as long as most other skaters at this level who have made it to Worlds and the Olympics.” [Sinek had taken a seven year hiatus before he began skating with Beata.] In a way, I was able to preserve my body. When we found out we had made the team, we were thrilled. We both worked really hard and put in many years. What was great was that we were going to experience the Olympics together,” Sinek added.

“The Olympics were unbelievable and definitely the most incredible experience of my life,” bubbled Handra. “The Opening and Closing Ceremonies were so magical and were the highest highs I’ve ever felt! Having the Olympics in the U.S. was one of the best things to happen to our country in light of the tragedy and horror of September 11th.” To Handra and Sinek, as well as many others, it appeared that the crowds were full of patriotism and spirit. “Even before we all entered the stadium, spectators at the top of the stands could see us approaching, and they were going crazy cheering, ‘USA!!! USA!!!’,” ruminated Handra. Sinek agreed, adding, “Even the snipers on top of buildings were waving at us. Hundreds of volunteers lined up along our path towards the stadium, shouting and cheering as we passed them giving high-fives. At this point, tears were pouring out of my eyes and we hadn’t even entered the stadium!” The excitement and rush of adrenaline was overwhelming for both. When they finally entered the stadium, everything seemed bigger than life. The stadium and the crowds were enormous, colors were vivid, and the world appeared bright. “It was as if we were walking into the most magical celebration in heaven itself,” reflected Handra. “Marching through that stadium and hearing the crowd roar for the U.S. athletes was absolutely moving!”

Prior to the Opening Ceremonies, President Bush gave a speech to the American athletes and then shook hands with everyone. “He was so easygoing and amiable,” said Handra. “The President was such a good sport. He was very patient, never refused any phones, and greeted each person on the other end by saying, ‘This is your President speaking.’ Other politicians we met during the Olympics included Laura Bush, Condoleeza Rice, Donald Rumsfeld, Tommy Thompson, and Utah’s Senator Orrin Hatch. We also spotted Kofi Annan getting a tour of the Olympic Village.”

Skating in the Delta Center for Handra and Sinek was a thrill. “The crowd was unbelievably supportive and always cheering like mad,” said Sinek. “After the situation with the pairs unfolded, people were so eager to watch dance and they bought tickets to compulsories, probably not the best event to see if you don’t know much about dance.” Handra added, “We heard people in the audience saying after twenty Quicksteps, ‘Honey, I think they’re all doing the same thing!’ Nevertheless, the U.S. crowd was always going nuts for all the U.S. skaters, and I think most of the skaters were blown away with their immense support.”

As for their skating, Handra and Sinek were happy with their performances and just excited to be there and participate. “We went in not expecting any placement because we’ve never been to Worlds,” said Sinek. “In addition to the fact we had to withdraw from the Grand Prix events this year, there were no North American judges on the panel. We didn’t have much luck with our starting order draws either. For most of our competitive career, we’ve had great draws, and I guess we probably used up all our luck just to get to the Olympics!” Handra added, “We drew first to skate for both the OD and the free dance! Charles also skated our free dance with a 101-degree fever. Regardless of the circumstances, we enjoyed our moments on the ice.”

When asked about their take on the judging for the ice dance discipline, Sinek stated, “We have never seen such a corrupt dance competition. In general, dance judging does have a reputation of being politically driven and we’ve seen that in many competitions. However, this one was the worst we’ve ever seen, from top to bottom. After the practice sessions in Salt Lake, we always saw judges talking to one another. We saw coaches talking to judges, coaches talking to the referee. It was absurd!” Handra added, “There was one coach that all of a sudden sat in as a coach for a some of the teams but only for the free dance. This coach was never near these skaters until the day of the free dance competition. Lo and behold, those teams moved up. Hmmm…”

Corruption aside, Handra and Sinek claimed they still had the time of their lives. They had met many interesting athletes from various countries and had talked with many kind and enthusiastic volunteers and military officers who were thrilled to be part of the Games. “All of the volunteers did a fabulous job and everything was run so well,” said Handra.

To Handra and Sinek, the Closing Ceremonies were just as sensational as the Opening. “The entire production was phenomenal with amazing performances and spectacular visual effects,” Handra said. “But when the time came to put the flame out, we were all so sad. Everything seemed so quiet and somber. I was expecting to leave the stadium with feelings of emptiness and deep sadness, but after several minutes of reflection, the energy started building up again and the excitement grew to such an unbelievably intense level. The Games were brought to a close in the most electrifying and exciting way possible, and we were all able to leave the stadium on the highest note.”

Sinek, who was in constant pain throughout the season, had postponed his second surgery date until March 26th, after the Olympics. “Charles is doing very well, but the recovery is slow,” said Handra. “There wasn’t just one tear, but fraying throughout the whole meniscus. The extent of meniscal damage was due to training hard and postponing the surgery for so long. We had no choice but to postpone the surgery if we wanted to skate at Nationals and the Olympics.”

Handra and Sinek returned from the Olympian and Paralympian trip to Washington D.C. feeling refreshed. “For three fun days we hung out with fellow U.S. Olympians and made new Paralympian friends, said Handra. “We all attended two black tie dinners, a lunch hosted by the Speaker of the House, and visited the White House where the President gave a speech to the athletes on the South Lawn.”

After years of competing, Handra and Sinek need to start recovering financially and thus have decided to join the ranks of the professional circuit. “As soon as his [Charles] knee heals, we’ll be back on the ice working on some new performance numbers. We’ve got a lot to do in our first year of professional skating so we can develop a name for ourselves,” stated Handra. “We will be doing a lot of teaching as well, and both of us will be returning to school at some point soon,” Sinek added. The timeline for their plans are not yet clear as a lot will depend on how much professional skating work they will have.