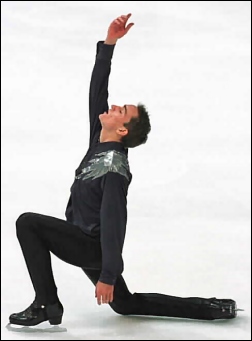 With Anthony Liu nearing the end of his competitive career, several Australian men have an opportunity to win the Australian Nationals and a spot in the World Figure Skating Championships.

With Anthony Liu nearing the end of his competitive career, several Australian men have an opportunity to win the Australian Nationals and a spot in the World Figure Skating Championships and possibly the 2006 Olympic Games. Queenslander Daniel Harries, 18, a native of Townsville on the northeastern coast of Australia, is one of the contenders. The 2002 senior bronze medalist has just begun competing in major international events, finishing 16th at the 2002 Four Continents Championships in Korea and 16th in the qualifying round at the 2002 World Junior Championships in Norway in March. “The Four Continents was my favorite competition so far,” he said. “Things were a lot different there.”

This season represents a comeback for Harries, who severely injured his knee in a practice collision before the 2001 Four Continents Championship and had to stay off the ice for three months. It was another two months before he could begin jumping again, forcing him to miss most of the 2001-2002 season. But he’s back jumping again, building up his strength for the 2002-2003 season. He said that his best jumps are the triple salchow and the triple toe loop; while his worst jump is the triple flip. He’s tried the quadruple salchow, but doesn’t expect to have the jump in his arsenal for next season. Instead, he hopes to improve on his combinations.

Harries is the only skater in his family, unless you count his grandparents, who were professional roller skaters. His father was a soccer player and his older brother is a lifesaver. Harries tried both gymnastics and skating when he was nine. “There wasn’t much else to do in Townsville,” he stated frankly. “I chose skating because I could move up to the next level.” After landing his first triple at 13, Harries moved to Brisbane to train in 1998, then back to Townsville and then back to Brisbane again. He now trains Monday through Saturday for an hour every morning and another hour or two in the afternoons at the Boondall Ice Rink in Brisbane. Off ice, he runs on the treadmill, swims, and does conditioning exercises and weight lifting. He had ballet training while training at the Royal Glenora Club in Edmonton for three months during the summer of 1999, where he worked with Jann Ullmark and Lise-Lotte Kinding.

Elena Antonov coaches Harries and also choreographs his programs, but he chooses all of his own music. The quiet Aussie used “Devils Trill” by Vanessa Mae for his short program this year and songs from the soundtrack of “Armageddon” for his long program. “I heard the Vanessa Mae music at a competition and liked it for the short,” he explained. “I watch a lot of movies and I like to skate to movie soundtracks. There’s quite a variety of soundtracks. My favorites are action movies and thrillers, and ‘Scream’ is my all-time favorite. When I saw Armageddon, I really liked the music for the long program.”

Off ice, he listens to alternative music and considers Fat Boy Slim and the Red Hot Chili Peppers as some of his favorite artists. In his spare time, he said, “I use the Internet a lot to email and chat and I like to go out and do things with my friends. And I collect DVDs.” He hasn’t traveled much but hopes to visit the east coast of Canada and New York City. Harries also reads crime novels, not surprising since he is a serious student who has finished his primary education and is planning on attending Griffith University to study criminology and criminal justice. “I’ve always been interested in the law, and I may combine those studies with a law degree,” he stated. Although he’s planning to skate until the 2006 Olympics, Harries doesn’t plan to coach afterwards. “I’d rather get a regular job,” he said candidly, “and coaching is not what I want to do.”