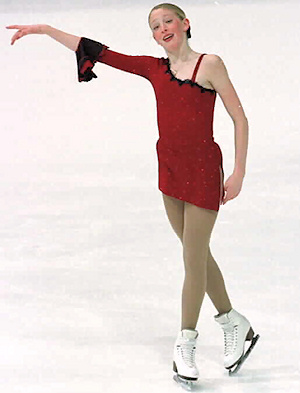 Canadian junior ladies figure skating champion, Lauren Wilson, may be just what Skate Canada has been trying to find for the last several years.

Canadian junior ladies champion, Lauren Wilson, may be just what Skate Canada has been trying to find for the last several years – a confident jumper who can hold her own against the U. S. and Russian skaters on the way to the 2006 Olympics. Wilson, who turned 15 in April, landed 16 of her 17 triples at the 2002 World Junior Figure Skating Championships in Hamar, Norway this March to finish eighth in her first major ISU international event. That included seven triples in the free skate, including a triple toe-step-triple toe sequence. “I love jumping,” said Lauren Wilson, who landed her first triple toe loop when she was 12. “I don’t really have a favorite jump, but I prefer toe jumps to edge jumps.”

Like many Canadians, Wilson has a lot of skaters in her family. “My mom used to skate when she was a kid and my brother is a great hockey player,” she said. “He’s going to Colgate University on a hockey scholarship. I started skating when I was four or five. My parents had me doing a lot of different sports, but I liked skating the best. I also played soccer from when I was three until last summer and I’m a competitive runner for my school, mainly cross country.” Wilson finished 12th in cross country in the Ontario Championships and runs the 1500 and 3000 meter in track as well as 5K road races.

Wilson, who was born in Oakville, Ontario, has trained at the Forest City Skating Club in London, Ontario with coach Penny Jelsma for the last three years. She considered doing pairs, but thought she was too tall. The petite blonde trains on ice for two to three hours every day after school, but takes Sundays off. She doesn’t do any off ice training in the winter, but runs instead. In the summer, she does two hours of conditioning, aerobics, and strength training.

Michelle McDonald Wheeler choreographs Wilson’s programs. This year, she used “La Violetera” and “Por Una Cabeza” for her technical program and several songs from the soundtrack of “Mr. Holland’s Opus” for the free skate. “Choosing the music is a collaboration between me, my choreographer, and my coach,” Wilson said. “I like to skate to fun music. I knew I wanted a tango for the short program this year, but I didn’t know quite what I wanted for the long. Penny found some music that she liked and we played it until we found the right one.”

Using the music from “Mr. Holland’s Opus,” a film about a dedicated teacher, is appropriate for Wilson, who is in the ninth grade at Oakridge Secondary School. “My best subjects are art subjects,” she said, “especially dance and music.” Wilson is musically inclined and plays three musical instruments. She has taken piano for nine years, viola for five years, and this year learned to play the flute. She doesn’t have any particular favorites when she’s listening to music. “It depends on what I’m feeling like that day,” she said.

Skating and school take up most of Lauren’s time, but said she likes to do “fun things with friends, like going to the movies, anything but horror films.” She collects Beanie babies. “I started collecting as many as I could, but now I just collect bears,” she noted. She uses her computer for homework and chatting with friends on email, but said she’s not into computer gaming. She also likes to read mystery stories.

Wilson, who was 19th in junior ladies at Canadians last season, had modest goals for this year – to have a consistent performance at Canadians and make the Junior National Team. “I was sick at the 2001 Canadians so I really wanted to have a good skate this year,” she said. Wilson far exceeded both goals by winning the junior ladies and competing at the Junior Worlds. “The Junior Grand Prix series helped a lot,” Wilson stated. “I learned a lot and knew I could skate with these other girls.” Wilson finished fourth at the Triglav Trophy, fifth at the Sofia Cup in Bulgaria and sixth at the SBC Cup in Japan in 2001.

“I really liked Japan. Their culture was really different,” Wilson said. “They even had karaoke in the skaters lounge. On the last night, I sang for two hours with Lauren Flynn.” France and Australia are two places Wilson hopes to visit in the future as she pursues her long-term dream of skating in the 2006 Olympics