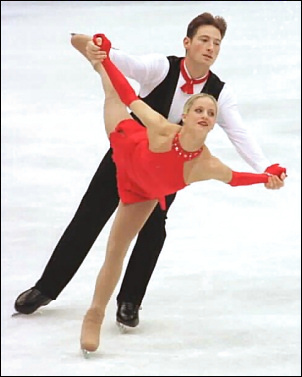 The U.S. figure skating pairs team of Tiffany Scott and Philip Dulebohn aim for another Olympics.

U.S. silver medalists Tiffany Scott and Philip Dulebohn realized a dream by competing in the 2002 Olympics in Salt Lake City, even though the skaters had missed almost the entire 2001-2002 competitive season after Dulebohn suffered a stress fracture that kept him off the ice for four months. “We had a wonderful experience at the Olympics, and were very honored to represent our country,” Scott said. “It was only our second competition of the year. I would really like to experience another Olympics, and would like to set a goal of top 3.” With the pairs event finishing early, they had time to watch other sports including speed skating and hockey, including the USA-Russia game where they sat right behind the goal.

For years, both skaters had toiled in the freestyle ranks without reaching the podium. Scott, who competed for 15 years, noted “I took it as far as I could and then decided to try something new. I wanted something more thrilling, so I decided to try pairs.” Dulebohn competed as far as seniors in 1997, where he finished 13th, but realized that “pairs offered more opportunities. I knew I’d never get to the big competitions in singles. It’s nice to have a partner. It makes a big difference when you’re not as lonely out there.”

Scott has been skating since she was four. Since her two brothers played hockey, she wanted to play too. Her parents allowed her to go to skating lessons rather than preschool, but preferred that she take figure skating lessons rather than hockey. She began skating lessons in the USFSA’s Skate With Us Program. Dulebohn began at six when his mother asked him if he wanted to take lessons along with his older brother Paul, who competed in men’s singles and pairs for several years. Five years ago, they were paired as a team by coach Karl Kurtz. “They both jump right, they were the right size match, and they have complimentary personalities,” Kurtz noted. “We had a lot to learn, especially since I had not had any pairs experience,” Scott stated.

The move to pairs paid off as the couple quickly moved from third in junior pairs in 1997 to second at the last three U. S. Nationals. They finished in the top six at the first three Four Continents Championships with a bronze medal in 2000. This year they moved up to seventh at the World Championships in Japan, after finishing 13th at the Olympics. “It’s been great to see places around the world,” Scott stated. “I had never been to any places like this before.”

Kurtz noted, “The reason that they have come so far so fast is that they’re both very positive people. They want to make things fun and that allows them to keep progressing.” The team practices for four 40-minute sessions each day, in addition to ballet and off-ice workouts that are sandwiched around work and school.

Kurtz choreographs their programs and selects all of the music. The pair used “Heartbreak Hotel” for the short program this season and Prokofiev’s Concerto No. 3 in C Minor for the free skate. Susan Austin suggested our short program,” Scott said. “It is a different look for us, and I thought it would be nice to have a change from our usual classical look.” Scott has a musical background since her mother is an instrumental music teacher. “While I was growing up I played just about every instrument,” she said. “I don’t have much time right now to devote to playing an instrument, but would eventually like to go back to playing the violin.”

Both Scott and Dulebohn are students at the University of Delaware. Dulebohn is a sophomore, while Scott is a junior who sports a near perfect average in her classes. She is majoring in nutrition, hoping to work with elite athletes, but is also considering a career in public speaking, broadcasting, or acting. Dulebohn Philip is working on a degree in engineering. They both coach “Learn to Skate” classes and wait tables to help with expenses since they have no sponsors.

Since their season schedule is so hectic, the skaters don’t have much time for other activities. When their schedule permits, both enjoy going out with friends. Scott likes to sew and collects skating stamps and postcards. Dulebohn likes to play pool, read fiction books, and listen to current and 1980s pop rock music. Both skaters like to watch action and comedy movies. In the off-season, Scott enjoys biking, hiking, rollerblading and tennis, while Dulebohn likes biking and jet skiing. “Each year I try to take up a new sport off the ice,” Scott said. “Last year it was tennis, which I still enjoy. This year will be golf. I just got a set of clubs.” She also just got a pet fish, named Sminklehoff, which she hopes won’t become a snack for her roommate’s cat.

The couple is also involved in public service work. Scott was recently elected to serve on the USFSA’s Athlete Advisory Council for the coming year. The skaters also do school appearances where they share their Olympic experiences and talk about the importance of academics and have been working on organizing a show or appearance to help a woman who is in need of a double lung transplant.