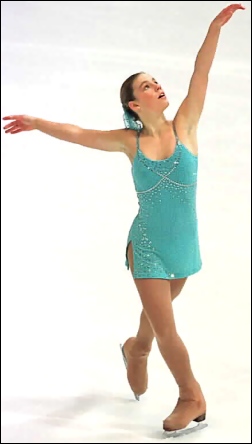 Switzerland has lots of skating Meiers, but only one Brog Meier, Kimena, 15-year-old dynamo who surpassed last year’s European sensation, Sarah Meier, to become the 2002 Swiss senior ladies champion. Brog Meier, who also has two silvers in the 2000 and 2001 Swiss Nationals as well as a gold in juniors in 1999, skated well last season, taking the silver at Trofeo Rita Trapanese and a fourth at the Junior Grand Prize in The Hague. She was 18th overall at the 2002 World Junior Figure Skating Championships in Norway.

“My parents took me to skiing, swimming and to try other sports when I was a child,” she remembered. “When I was four, they took me to the ice rink. I saw some skaters doing their free programs and I wanted to do it so I started taking lessons.” She landed her first triple toe loop when she was ten and has become a powerful jumper. “I like jumps and spins,” she said. “My favorites are the triple toe and the double Axel. The hardest jump for me is always changing, but it’s usually the triple lutz.” Brog Meier said she is working on the triple Axel, but that it’s not yet totally complete. She’s using a triple toe/triple toe combination and working on triple lutz/triple toe and triple lutz/triple loop for next season.

Brog Meier works for about 2-3 hours every day on the ice, with one day a week off. She trains with her original coach, Gabrielle Gisler, in Luzerne and Engelberg, Switzerland in the winter. In the summer, she trains in Oberstdorf, Germany and last year in Colorado Springs, Colorado with Tom Zakrajsek. Off ice, she jumps on the trampoline and does some weight training. Since her mother is a ballet teacher, she has taken classes since she was seven and still has at least one class per week.

Mi Jung Pedrazzoli choreographed her programs last season, which included “Le Fabuleux Destin d’Amelie Poulain” by Yann Tiersen for the short and the soundtrack from the movie “Flipper” for the free skate. “My coach and my choreographer and I listened to lots of music and found soundtracks for both programs,” she explained. “I like music from soundtracks, music that’s in the charts, and hip hop. I also like the music from Cirque du Soleil.”

Brog Meier impressed observers at the 2002 European Championships in Lausanne, Switzerland, by skating to an artistic rhythmic gymnastics program. For the exhibition in Lausanne, she used music from Cirque du Soleil. “I wanted something special since circus is special,” she said. “I like all the Cirque du Soleil music.” Kimena can juggle, “but only three balls,” she said. She’s also a musician herself, having taken piano lessons since she was eight. “I play mainly classical, Bach or Beethoven,” she noted.

For fun, she likes to go to the cinema and out shopping with friends. She uses her computer for schoolwork, email and the Internet but insisted that “I’m not a computer freak.” Kimena collects ladybugs, a trait she shares with teammate Stéphane Lambiel. Her favorite trip so far was to Colorado and she hopes to visit Canada. Brog Meier has finished her initial schooling and is studying for her tests to enter the university in Switzerland, but has not yet decided on a future career. She speaks English, German, and some French.

Brog Meier plans to compete for the next four years, hoping to make it to the Olympics in 2006. Then she’ll decide whether to continue or concentrate on schoolwork. “I want to skate at the Olympics and Worlds,” she said,” but I don’t have to be first or second. I just want to skate without mistakes. I’m happy when I just skate well.”