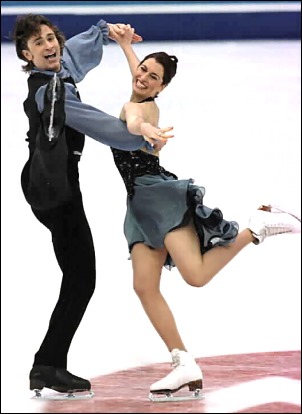 Canadian ice dancers Melissa Piperno and Liam Dougherty accomplished their goal for the 2001-2002 season by finishing fifth at the Canadian Nationals and earning a spot on the Junior National Team.

Canadian junior ice dancers Melissa Piperno and Liam Dougherty accomplished their goal for the 2001-2002 season by finishing fifth at the Canadian Nationals and earning a spot on the Junior National Team. The youngsters, who have both just turned 18, are now aiming to make the Junior World team for this season and anticipating competing in Junior Grand Prix events. Eventually they hope to make the Canadian World and Olympic teams. They plan to compete until 2010 or 2014.

Piperno began skating when she was six. “My mom subscribed me to a figure skating club to learn how to skate and I was getting group lessons,” she said. She began dancing when she was eleven. “First of all, because I am way too tall to skate pairs. Second, I am really not a good jumper and third I just love skating dance because of all the interesting stuff you can invent and learn. I enjoy the feeling of flying on the ice and the freedom of the movements we can do.”

“My mom enrolled me in skating simply so that I could learn how to skate,” Dougherty said, “and I might not have taken it further if it hadn’t been for a friend of mine who was much more advanced in skating, who convinced me to go further. I switched over to dance while I was down in Montreal, and my coach at the time suggested that I’d be better in dance. I made the switch and never regretted it or looked back. I really wasn’t a good jumper.”

Piperno and Dougherty have been skating together since January 1999. “I had just broken up with my former partner when I heard that there was a boy that came from the Yukon to skate in Montreal and that he was looking for a partner,” Piperno recalled. “However he had no dance competition background but he had done two years of ballet. So I called his coach and we did a try-out and the next day we were already training to compete. We are both hard workers and we work well together. On the physical side, well we are both tall and slim with long legs.”

The dancers train in Montreal with coach Julie Marcotte, who also does all their choreography. They work for about four hours a day on ice plus ten hours off ice training each week. That includes three days a week in the gym, hip hop classes, ballet, and a Brazilian art dance, Capoeira. “Some break dancing moves come from this art,” Piperno noted. Dougherty is unusual in that he has more extensive ballet training than his partner.

“One day the National Ballet School came to Whitehorse, Yukon,” he recalled, “and my mother convinced me to try out for the school. I had never taken ballet before, but I was accepted into their summer school. I went down to Toronto for a month, and basically learned as I went along. After I returned from the school, I continued to take ballet in the Yukon, and then went back to the NBS the following summer. I always wanted to skate first, but realized that ballet would help me with my skating.”

“Most of the time it is our coach/choreographer that picks the music for us and comes to the rink with a bunch of pieces that we listen to all together,” Piperno explained. “For the 2001-2002 year, our coach did a lot of the work. For the Original Dance, we watched a tango movie and one of the songs was really good so we went to find it in a music store. As for the free dance, we searched for Latin music since we had decided to do a Latin free dance. For the 2002-2003 free dance, it was easy because we had worked on that piece of music for a show number and we decided to keep it for the year. It is the ‘Tango de Roxanne’ from the Moulin Rouge movie. As for the original dance, we are using music from the Disney movie The King and I.”

The dancers enjoy trying new styles but most enjoy skating to Latin music or tangos. Off ice, Dougherty prefers rock, while Piperno said she enjoys “everything except country music. But my favorite is trance, techno, electronica, dance music, R&B, hip hop…club music.”

Dougherty is studying commerce at Champlain College, while Piperno is studying psychology at Collège Ahuntsic. “We both have around four classes per session and we go to school in the afternoon so we can skate in the morning,” Piperno said. She plans to become a sports psychologist after she finishes competing. “I would like to help athletes to become stronger mentally before a competition or when an injury occurs.” Dougherty said, “There are so many things that interest me, but I would really like to become a writer. Novels, short stories, essays, anything that involves creative writing.”

To relax, Piperno likes to go dancing, go to the movies, ride her bike, play tennis, watch a baseball or hockey game, go shopping, and just walk around in downtown Montreal. She said she likes all kinds of movies except science fiction and documentaries. She also collects money from different countries and stuffed animals.” Dougherty said, “Like any teenager, I enjoy going out with friends every once in awhile, but I really enjoy simpler things, like cooking, writing, and catching up on sleep.” He also has a pet hedgehog.

On holidays, Piperno enjoys going to the Dominican Republic or to Mexico, while Dougherty prefers to go camping with his father. Her favorite trip was to Milan, Italy, where they did their first Junior Grand Prix event. She hopes to return to Italy to see relatives and later tour Europe. “Fortunately with our sport we get opportunities to travel and see new places,” Dougherty said, “but we can’t always enjoy the place we compete in. I would love to visit my relatives in Hungary, and explore some of my distant roots in Ireland. Basically though, the more places I can explore and discover the better.”