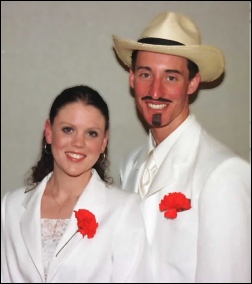 You have to be really dedicated to be an ice skater from Australia. Most Australians don’t know that they even have figure skaters in their country and most readers think AUS means Austria when they see the results from international competitions. There are more ice rinks in Connecticut, the second smallest state in the United States, than there are in the entire continent of Australia. But that doesn’t mean that there aren’t native Aussies dedicated to the sport.

Natalie Buck and Trent Nelson-Bond, both 21, are Australia’s top-ranked dance team. They finished 28th at their first World Championships even though Buck skated with a heavily bandaged hand and arm as a result of a training accident which nearly severed a finger. The young team had earlier finished 13th at the 2002 Four Continents Championships, Nelson-Bond’s third Four Continents appearance. He had previously finished 11th with former partner, Danielle Rigg-Smith.

“Natalie and I got together after Danielle and I broke up and I was looking for a new girl,” Nelson-Bond explained. “I picked her because she was everything I was looking for, but she had never done any dance before.” He had started skating when he was seven because “I was always wondering what was inside the dome down the road from me. It was an ice rink. I decided to do dance as I was getting injured with singles and was getting bored and I wanted to try dance. I had tried pairs but also found it boring.” He has been dancing since he was 13.

“I began skating when I was five years old,” Buck stated. “I originally wanted to do ballet but my dad refused because he ‘didn’t want me walking like a pigeon’. Torvill and Dean were pretty big at the time so he suggested I try ice skating…and so I did. I’ve only been dancing about two years. Prior to that I was a senior singles skater. It’s funny because I tried a little ice dancing when I was 13 and thought it was soooo boring! I couldn’t understand how people could just skate around the rink without jumping and spinning. And now, I dance.”

“My favorite dance would have to be the Starlight Waltz,” she continued. “It’s simple but graceful and just seems to flow so smoothly. The hardest dances for me would probably have to be tangos of any sort. I find it very hard to get into the tango character. I’m definitely more of a waltz person.” Nelson-Bond said that he had “lots of favorite dances, but I know a couple of compulsory dances that I really dislike. Each of them are equally hard if done correctly as they all have different characteristics when they are presented.”

The dancers train mostly in Sydney with Anne-Zoe Richardson, although they spent a few weeks in the summer working with Bernard Ford in Seattle. They train for about two and a half hours five days a week on ice with thrice-weekly workout sessions in the gym and another hour and a half off ice dance session each week. “We have a room set up with a huge mirror in our coach’s garage where we go through all our dances to music concentrating on our presentation,” Buck related. Not quite the same level of facilities as one of the American or Russian athlete training centers.

Richardson has choreographed all of the couple’s dances, although this season they are also using Andres Topp, an Australian who worked with Torvill and Dean. Last season, Nelson-Bond found the music for their free dance, an upbeat swing. “The music was by a black hip hop group called Jurassic 5 — a really cool sounding 30’s back beat music,” he noted. This season they will be taking a military approach to their Grand Ballroom original dance, while trying something ethereal and abstract in their free dance using “Storm” and “Poets Request” by Vanessa Mae.

Both dancers have to skate early in the morning because they have other commitments during the day. Buck is a full-time student at the University of Sydney, planning to major in marine biology and geology. “I’ve wanted to be a marine biologist since I was little so we’ll just have to wait and see where everything leads me,” she said. “My ultimate job would be to work off the coast of Queensland on the Great Barrier Reef, either researching or taking people on tours. She also works at a restaurant to fund her skating career and volunteers as a youth leader at her local church.

Nelson-Bond said, “I work eight days a week to pay for my skating.” That’s not much of an exaggeration as he does heavy landscaping work for his father, who operated one of Sydney’s largest plant nurseries for many years. Nelson-Bond is an expert on the native Australian fauna and could be a tour guide himself with his local knowledge, but said he wasn’t sure what he wanted to do yet. On the positive side, all of the physical labor keeps him in tiptop shape.

Neither skater has much free time. Buck likes to hang out with her friends and occasionally go to a movie. Nelson-Bond likes to read car magazines and work on cars or visit his mates. He used to play ice hockey but said he had to “give it up because it is not very good for my dancing in terms of skating styles.” He has a black Labrador/rottweiler mix named Golly, while Buck has two miniature dachshunds (Bazil and Lucy) and a tropical fish tank.

On their rare holidays, Buck likes to go away for a week in the summer to Byron Bay or somewhere with a nice beach. One of their friends owns a beach house about an hour from Sydney and the skaters sometimes take a weekend off to go there and relax. Nelson-Bond also likes to go four-wheel driving up the coast with friends. He’d like to visit Nepal one day and go all over Canada. Buck has already toured much of Canada on a six-week-long tour with a friend. “It was so beautiful,” she said. “I have never seen so much snow and Christmas lights at one time.” Among the places she’d like to visit are Mexico, Ireland, Egypt, Alaska and South America.

Both Natalie and Trent plan to continue skating for many years, hopefully performing well enough to ultimately skate in the Olympics. But both stated that winning was not their only goal. “Skating’s been a part of my life for so long that I can’t imagine not skating,” Natalie explained. “I love the whole package. It’s graceful, it’s beautiful, and in Australia, it’s a little bit different. People are intrigued that there are actually ice skaters in Australia. I love having a goal in life and the early mornings aren’t all that bad.”

“My goal in skating is quite simply to have as much fun as possible every day while still letting the wind take me wherever it goes,” Trent added. “I plan to compete until I guess I feel it is the right time to stop. Skating gives me a release from everyday life. I can be artistic and it gives me something to do each day and be the best I can be. Skating is whatever you want it to be but for me it’s the most fun you can have with a girl in public with your pants on!”