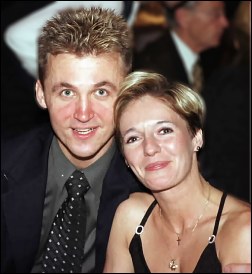 Dorota Zagorska and Mariusz Siudek were the first Polish figure skating pairs team to win a medal at the World Championships when they took the bronze in Helsinki in 1999.

Poland’s dominant pairs team, Dorota Zagorska and Mariusz Siudek, plan to continue to compete internationally after this season, with an initial goal of two more years. “I like the competitions,” Siudek stated, “so why not compete for a few more years.” With professional skating opportunities diminishing and a limited number of skaters to coach in Poland, the couple’s decision to continue to compete on the lucrative Grand Prix circuit is not a surprise.

Zagorska and Siudek were the first Polish pair to win a medal at the World Championships when they took the bronze in Helsinki in 1999. They have finished in the top six at Worlds for the past five years, won two silvers at Europeans, placed tenth at the 1998 Olympics and seventh in 2002, took fourth at the 2001 ISU Grand Prix Final, and were second at the 1998 and 2001 Goodwill Games. The couple has medalled at several Grand Prix events and won gold medals at Golden Spin of Zagreb, St. Gervais, and the Otto Nepela Memorial. This year, the six-time Polish national champions qualified for the Grand Prix Final, finishing second at the NHK Trophy, third at the Bofrost Cup on Ice and fourth at the Cup of Russia.

Both Zagorska and Siudek began skating because they had relatives who skated. For Siudek, it was his sister Anna, who skated in junior ladies, who brought him to the rink at age seven. For Zagorska, it was a cousin who introduced her to the sport at six. Both skaters liked pairs as soon as they tried it, but never tried dance. After first skating singles, Zagorska then tried pairs with Janusz Komendera, while Siudek skated with Beata Zielinska in 1992 and 1993, then with Marta Gluchowska in 1994. They actually competed against one another at the 1994 Europeans, where Siudek and Gluchowska finished 12th and Zagorska and Komendera 18th.

A friend and judge, Anna Siercoka, told Siudek that he could be a good pairs skater, but needed a better partner and recommended Zagorska. When she moved from Krakow to the Oswiecim club where Siudek skated in 1994, due to a lack of ice at her club, the couple joined forces. They took a silver medal at their first competition, the 1995 World University Games, and got better from there. “We are two people who understand each other on the ice,” said Siudek. And off ice as well as they were married in the spring of 2000, after Mariusz proposed at the closing banquet at the World Championships in Nice.

The skaters cited two Russian pairs as the couples they most admired: Oksana Kazakova and Artur Dmitriev and Ekaterina Gordeeva and the late Sergei Grinkov. “We like the technical quality of their skating and their flow on the ice,” Siudek noted. To improve their technique, the Poles have started regular ballet training this year with a coach from Belarus. Before that, it was only “time to time, not regular training,” Siudek said. They usually work four hours on ice and four hours off ice each day. Their off ice training includes not only ballet, but also conditioning and weight training. In the summer, there is no ice from April to July so the skaters travel to Russia or the Czech Republic to train.

Tiny blonde Dorota’s favorite elements are the throws. The couple does throw triple Salchows and gets tremendous height on all their throw jumps. For tall, dark-haired Mariusz, the lifts are the best. “Hand to hand lifts are simple,” he said, “so we borrowed from Shishkova and Naumov and others to do lifts with different entrances and changes of position in the air.” They are also planning to do some of the lifts popularized by Isabelle Brasseur and Lloyd Eisler.

Coached by Iwona Mydlarz-Chruscinska and Richard Gautier, the duo usually skate to classical music, but this year’s programs, choreographed by Frantisek Blatak and Vladimir Chernyshov, are a bit different. The Poles only change one of their programs each year, either the short or the long. This season, they changed their short, using the “Lord of the Rings” soundtrack. For the second year, they are using Rene Dupere’s “Xotica” for the free skate.

Classical music is Zagorska’s favorite off ice as well, but Siudek listens to everything but hard rock. In their limited free time, they like to go to the mall or stay home and read. Her favorites are mysteries and romances, while he prefers detective stories. Siudek is also interested in cars, electronics, and computers. Since they got a computer, he has been surfing the internet, taking digital photographs, and designing their own web site. Neither skater has time for other sports, although Siudek used to play volleyball and Zagorska likes mountain climbing. Both skaters love to travel. Japan has been their favorite destination so far “because it’s so much different from Europe and America, such different traditions,” Siudek said.

Although they were both students at Krakow State University when they met, they later switched to the Academy of Physical Education to prepare for a future in coaching.