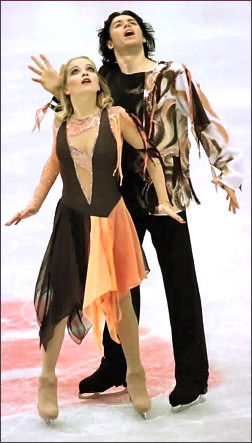 Ice dancers Natalia Gudina and Alexei Beletsky train with Natalia Linichuk and Gennadi Karponosov at the University of Delaware.

The success of Galit Chait and Sergey Sakhnovsky, who won the bronze at the 2002 World Figure Skating Championships, has encouraged other ice dancers to skate for Israel. One such team is that of Natalia Gudina and Alexei Beletsky. At only 25 and 23 respectively, the young dancers give Israel a strong second team to compete internationally.

Gudina began skating when she was four. “My father and mother were dance choreographers,” she said. “They were always working out choreography at home. I took dance classes, then I saw skating on television and liked it. My father wanted me to be a dancer and my mother wanted me to be a skater so I became an ice dancer. I started ice dancing when I was nine and had a few other partners before I started with Alexei.” Gudina finished third and fourth at the 1996 and 1997 World Junior Championships and 18th at Europeans in 1997 with Vitali Kurkudym, as well as second and third at Ukrainian Nationals.

Beletsky began skating when he was five. “It was the idea of our family doctor,” he said. “I had problems with my tonsils and he told my parents I should play a winter sport. I started skating and had good results so I continued. I skated singles until I was 18, but my results were not too good. I did some triple jumps, everything but the lutz and the Axel. Then Natalia’s coach had a place for me in her dance class. I had known her since she was 12 because we were in the same club. She was my first partner and we have now been together for five years.”

The couple began dating after they started skating together and married in 1999. They had been competing for Ukraine, but decided to emigrate to Israel in 2000 to continue their skating. Since then, they have finished second each year behind Galit Chait and Sergey Sakhnovsky, but have done well internationally. They finished 15th at the 2002 Europeans, 25th at the 2001 World Championships and 19th at the 2002 Olympics. But Gudina suffered a stress fracture in her leg during training after the Olympics and could not skate for a month, causing them to miss the 2002 Worlds. This season, the dancers finished third at the Karl Schafer Memorial in Vienna, and fifth at both the Bofrost Cup on Ice in Germany and Trophee Lalique in France. Gudina said their goal is “a gold medal in the Olympic Games,” but noted that they had not made any long-term plans past 2006. “We just want to skate well and show people what we can do,” Beletsky added.

The dancers train with Natalia Linichuk and Gennadi Karponosov at the University of Delaware, where they moved in the summer of 2001. They train for about 4-5 hours a day in the winter and six hours a day in the summer. “It’s a good place for training,” Beletsky said. “We have a lot of time on the ice.” Linichuk does the couple’s choreography, but Beletsky noted that the selection of music was a joint decision. They are using music from the “Notre Dame de Paris” soundtrack for their free dance this season. “We went to see the show and liked the music,” Gudina said. “This is the best music that we have skated to.” For their original dance, they are using “The Drinking Song” from Verdi’s “La Traviata” and Strauss’ “Petersburger Galop” and for their exhibition program, “While My Guitar Gently Weeps.” “It was just good music,” Beletsky stated. Neither skater expressed a preference for the type of music that they wanted to use for their programs or for favorite compulsory dances. “Every dance has good parts,” Gudina said. Off ice, they both listen to Russian popular music.

To relax, Beletsky enjoys playing tennis and soccer, while Gudina likes to swim. They like going out with friends, but don’t go to many movies. They enjoy reading instead. “I’m doing crosswords now to learn more English,” Gudina said, adding that they both speak Russian and Hebrew. They use a computer for email and occasionally Beletsky plays computer games. Their favorite trips included Vienna and Paris and they hope to go to Venice some day. Gudina keeps the toys that they receives from fans, with pandas being her favorites.