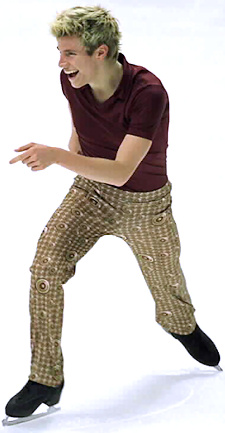 Canada's Jeffrey Buttle, who finished second at the 2003 Canadian Figure Skating Championships, has a unique perspective when assessing his performances.

Canada’s Jeffrey Buttle, who finished second at the 2003 Canadian Figure Skating National Championships, has a unique perspective when assessing his performances. The young Canadian is one of the few active skaters who are also working skating judges. “Canada’s short of younger judges so the director asked me if I wanted to give it a try,” he related. “It’s a hard job but very interesting. Right now I can judge up to novice at sectionals. It’s really helped me in my skating because we meet to analyze all of the deductions. I realize what’s more or less important in the marks and I understand my marks more when I’m being judged.”

A change in attitude also contributed to a breakthrough year in 2002 for the young Canadian. “In the past, my nerves got to me,” he said. “Now I’m concentrating just on the performance, not the jumps, and trying to have fun out there.” Except for a gold medal in the Mladost Trophy in Zagreb and a silver at the 1998 Canadians in juniors, Buttle had never reached the podium in a national or international event. But he started strongly in 2001, taking a bronze at the Karl Schaefer Memorial in Austria and a silver at the Nebelhorn Trophy in Germany. Then he sprained his ankle before going to the NHK Trophy and things looked bleak. “I was on painkillers at NHK,” he said. “I was really surprised that I did so well there.” Then he took off time from training after NHK to rest the injured ankle.

At Canadians, he had finished tenth, sixth, and ninth in the three preceding years and wasn’t expected to contend for a medal. In fact, his goal for the season was just to finish in the top five and represent Canada at the Junior Worlds in Norway. But he skated three solid programs and finished third behind Elvis Stojko and Emanuel Sandhu at the 2002 Canadian Championships. “I had been skating well, but my ankle just felt right all week,” he said. “I didn’t expect to do as well as I did. I was happy with my performance. My jumps were good but there’s room for improvement. I need to improve the consistency of my triple Axel and have a quad if I want to win.” Two weeks later, Buttle was in Korea, where he won the 2002 Four Continents Championships by finishing second in both the long and the short. His consistent triples outscored the quads that were poorly executed by the other contenders. He capped off the season with an 8th place finish at his first World Championships in Japan. With the exception of Canadians, the 2002-2003 season hasn’t been as good for him. He finished fifth at the NHK Trophy and seventh at Skate Canada.

Buttle, who was born in Smooth Rock Falls in Ontario, began public skating when he was two. “There wasn’t much to do in town except skate,” he said, “and I was never a huge hockey fan.” His sister was originally an ice dancer, and then switched to precision, but Buttle stated that he was never interested in anything except freestyle. “I never had any desire to do pairs or dance,” he said. “I like to by myself and have fun out there.”

He progressed through the CanSkate program and went to his first skating camp when he was seven. By the time he eleven he had mastered the double Axel and at 13 had landed both the triple toe loop and the triple salchow. “The triple Axel is my hardest jump,” Buttle noted, “but I think I give it trouble myself by trying to second guess it. I’m endlessly working on the quad, both the toe and the salchow, but they’re not very good yet. But I’m landing the toe in each practice.” Buttle has the quad toe/triple toe in each program, plus triple Axel/triple toe in the long.

Buttle practices for an hour to an hour and a half on ice five days a week at the Mariposa Club in Barrie, Ontario, where he has trained for the past four years. He is coached by Lee Barkell, Wendy Philion, and Doug Leigh. His choreographer is David Wilson, who created the programs that Buttle uses this season: “Conspiracy Theory” by Carter Burwell for the short, Elgar’s “Concerto for Cello and Orchestra in E Minor, Opus 85” for the long, and “Seven Days” by Craig David for his exhibition program. “I make sure that I choose the music for my programs,” Buttle noted. “Otherwise, you get pretty tired of it by the end of the season. “I like to do all styles of music, so I’m not just a one trend sort of skater.”

To relax, Buttle listens to all kinds of music. He also likes to hang out with friends and work on his computer. He said he enjoys reading “books that have an effect on me.” For holidays, he likes to go to the beach and went to Jamaica last year with his sister. He’d like to visit Paris. So far, his favorite trip was to Japan for the 2001 NHK Grand Prix event. “Winning the silver was a memorable experience and there was so much to do in Tokyo,” he said. “The people were so nice. I loved it there.”

As a chemical engineering student at the University of Toronto, Buttle takes classes three days a week. “At this rate, it will be nine years to get my bachelor’s,” he laughed, “but I don’t want to be so involved in school that my skating suffers.” He hasn’t decided whether his future will also include coaching skating. “It interests me but I don’t know if I have the patience for it,” he admitted. But that decision won’t need to come for a while yet. He has his sights set on reaching the 2006 Olympics in Turin, Italy. He hopes to become Olympic champion and a two-time world champion, following in the footsteps of his role model, Kurt Browning. “Kurt had the best jumps in the world, and his programs keep getting better and better,” Buttle noted. So do Buttle’s.