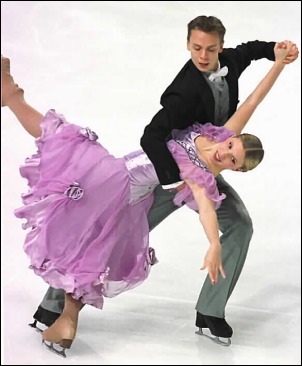 German ice dancers Miriam-Olivia Steinel and Vladimir Tsvetkov, who finished fifth and fourth at the World Junior Figure Skating Championships the last two years, are making a successful transition to seniors. They finished sixth at their first senior Grand Prix event, the Bofrost Cup and seventh at Trophee Lalique. The dancers, who won three bronze medals at the ISU Junior Grand Prix, plan to skate at least until the Olympics in 2006. Tsvetkov, who moved from Russia five years ago to skate with Steinel, will be eligible for German citizenship by then, which would make the couple eligible for the Olympics. “This was our first senior competition,” Steinel said of the Bofrost Cup, “and we still feel like juniors.” They finished second at the 2003 German Figure Skating Championships this month, behind Kati Winkler and René Lohse.

Tsvetkov began skating when he was four. “My parents took me to the rink just to try it,” he said. “I had a lot of fun so I went regularly. But I was afraid of the jumps, so my trainer told me to go to ice dancing when I couldn’t land an Axel. I was nine or ten.” Steinel began when she was six. “My mother wanted me to learn to skate,” she said. “I had a choice between figure skating and ice hockey. I wasn’t a very good singles skater, so when there was a possibility for a partner, I moved to dance.” A concussion from a fall also affected her decision to become a dancer by age eleven. After her previous partner quit, Steinel’s coach went to the Nebelhorn Trophy looking for a partner for her. He sent a video to Tsvetkov, who decided to come to Germany to skate with her. “I skated ten years with another partner, but when she finished I thought I was finished,” he said. “The French wanted me to come there, but when I saw the video, I wanted to skate with Miriam so I came to Germany.”

The dancers have trained together for five years, the last four years in Oberstdorf with Martin Skotnicky. They train for four hours on ice every day, plus three hours of off ice conditioning. They also do ballet twice a week. Last summer, they attended a special training camp in the Azores for two weeks, which included biking, rollerblading and swimming. Steinel said she also goes jogging and cycling sometimes.

Their main choreographer is Kelly Johnson although Werner Lipowski helps with the programs. “Every year we choose our own music,” Steinel said. “There were not many choices for the original dance, so we have a German operetta. Since it is our first year in seniors, we wanted something happy that the audience would like for the free dance.” Their original dance is from “Im Weissen Rossl (The White Horse Inn)” by Robert Stolz while the free dance is to “Buona Sera,” “Your Picture” and “Luna Mezzo Mare”. As for their favorite dances, Tsvetkov said he “likes Latin music because of the interaction between the man and the lady. You can move and step and play with the eyes. I like the rhumba, but the tango romantica is not an easy dance.” “Tangos are definitely my favorite dances,” Steinel said.

Both of the skaters love disco dancing. He listens to black music while she listens to different kinds of music, but no techno. Since there’s not much to do in Oberstdorf, Steinel mainly just relaxes with non-skating friends, goes to the cinema and plays with her two cats. For movies, she watches thrillers and love stories but not war films. Her newest hobby is collecting each of the new Euro coins from each country. Tsvetkov prefers comedies. He likes to make music on the computer with his friends and act as a disc jockey. He keeps some of the stuffed animals he receives, but both skaters give most of them to children they know and donate their flowers to volunteers who helped with the competitions.

Steinel’s favorite trip was to Scotland. “It was very mystical,” she said. “We saw castles and looked for Nessie.” She wants to go to Africa for a safari. Tsvetkov wants to go to Sweden and Brazil “to see the women.”

Tsvetkov has started a work-study program to become an event manager. He wants to manage sports, music and entertainment events. Steinel is studying food production engineering.