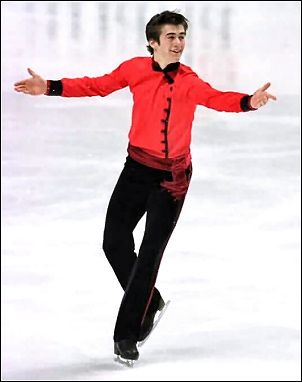 By the time he was nine, Ryan Bradley had landed a double axel, triple salchow and triple toe loop.

Ryan Bradley comes from a skating family. Both of his parents were skaters. He said he started when he was two because “my sister was a skater and my parents took me to the rink to keep me out of trouble.” His sister, Becky, now coaches at the rink where he trains. “I wanted to play hockey, but my mom wouldn’t let me,” he continued. “But I did in-line hockey for a while. I love to play hockey.” Bradley also enjoys other sports and played soccer, baseball, and basketball until he was 12, when he moved to Colorado to concentrate on skating. He was an all-star in both baseball and basketball.

By the time he was nine, Bradley had landed a double Axel, triple salchow and triple toe loop. He regards the triple toe loop as his favorite jump but said, “The lutz is not my friend.” He’s working on two quads, the salchow and the toe loop. “I’ve got to get the triple Axel and both quads to make my mark at Nationals in seniors,” he explained. “I’ve landed both quads, but there’s just not enough consistency. There not good enough yet to put in the program.” He finished seventh at U.S. Nationals in 2002 in senior men, and ninth this year, pulling up from 15th after a poor short program.

“At least that was a better skate than at Junior Worlds,” he lamented, after finishing 15th in Hamar, a drop from fifth in 2000. “I peaked in the qualifying round, then lost steam for the rest of the event. When I slipped at the beginning of the short, I lost focus.” There were few fans in the crowd, which disconcerted him. “My skating is fueled by the fans,” he said. “It helps me out, especially when I make mistakes. A big crowd really gets me pumped up.”

Bradley has several gold medals from several internationals including the 1998 Triglav Trophy, the 1999 Gardena Spring Trophy, the 2000 Mexico Cup, the 2000 JGP Gdansk, and the 2000 Golden Spin of Zagreb, but missed competing last season due to the September 11 disaster. He was fifth at the 2001 Junior Grand Prix Final in Scotland and eighth at the JGP Final in 1999 and has finished in the top ten in seniors at U. S. Nationals the last three years. Bradley’s progress was slowed in 2001 when he had knee surgery to repair damage to the knee on his landing leg. “I have bad knees,” he lamented. “That set me back three months when I couldn’t be on the ice.”

The 1999 U. S. junior champion also skated pairs from 1996 to 1998 with Tiffany Vise and in 2001 with Melissa Gallegos, reaching the Sectionals. “I’m just focusing on singles now,” he said. “There’s not enough time to train for both.” Bradley practices for about three hours a day on ice and 2-3 hours off ice in Colorado Springs. His off ice program includes weight training, cardiovascular work, and ballet, which he began at 14. “They had to force me to go earlier, but now I enjoy it,” he said. “I go three times a week.” Tom Zakrajsek is his coach.

Lots of people are involved in picking music for his programs. “My choreographer, my mom, my coach – everyone has ideas for my music,” he said. “I have a choreographer, but I like to have a lot of input into my own programs.” His choreographer is Nathan Birch, who designed both programs last season year: “Victory” by Bond for the short and “the Willhelm Tell Overture” for the long. “It was fun skating to the Lone Ranger theme,” he said. “I had a good time with it. I pride myself on skating to any kind of music, whether it’s graceful and slow or upbeat and funny.” Off ice, he listens to “anything with a good beat to it, especially hip hop. I’m not too musically inclined. The rest of my family is, but I have no rhythm.”

He said he doesn’t do much other than train and go to school. “I use my computer to email friends and write a journal for my web page. And I like to wrestle and play paintball. His favorite trip was to Venice, a side trip after his first international. He’d like to visit Asia and Australia. “I have a lot of good friends who live there like Brad Santer,” he said. “I’d love to see what it’s like down there.”

Bradley is a home-schooled high school senior, who loves math. “I plan to go to University of Kansas and study sports science,” he said. “I’d like to be a skating coach. In fact, I’m trying to get a job coaching this summer since I don’t have any sponsors.” He plans to continue at least until 2006 and hopes “to go to the 2006 Olympics and make a run for the medals.”