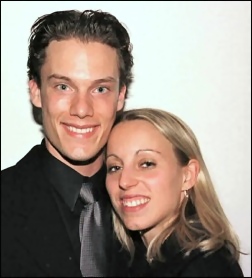 Hoping a change might improve their finish next season, Canada's Valerie Marcoux and Craig Buntin moved to Montreal last week to train with Richard Gautier.

Canada’s Valerie Marcoux and Craig Buntin made the most of their first competition as a team, winning the Nebelhorn Trophy in Oberstdorf, Germany in September. The couple had only been skating together for four months, after Marcoux split with Bruno Marcotte, with whom she finished 12th at the 2002 World Championships and fourth at the 2002 Canadian Nationals. Buntin, who formerly skated with Jesse Sturdy, was also looking for a new partner. Since he and Marcoux had been a couple off ice for three years, they asked coach Paul Wirtz to skate together and he agreed.

Marcoux began skating when she was about three. “My sister was skating so my mom put me into it instead of having me just sitting in the stands. She learned with me. My dad was a hockey player and my sister did synchro.” She competed in singles until three years ago, finishing fifth in juniors at Canadians in 1999. She landed her first double Axel and triple toe loop when she was 15, but had had trouble with edge jumps. “I’m much better with toe jumps,” she said. “I wanted to do pairs since I was 12. I did a little bit of juvenile pairs, but there were no pairs in my home club. Since it was my dream to do pairs, I moved to train with Paul Wirtz because he was looking for partners.”

Buntin started when he was ten. “I wanted to play hockey so I went to Learn to Skate classes so I could skate when I began hockey,” he stated, “but then I never played hockey. There was a girl at the club who was looking for a pairs partner and since I was the only guy there, I was it.” He skated singles for a while, but only to the Sectionals before concentrating on pairs. He landed his first triple, a triple toe loop, at 15. “It’s still my best jump,” he said.”

Until last week, the couple trained at the Toronto Curling and Cricket Club, where they skated for three to four hours a day on ice, six or seven days a week. They also took ballet four times a week. “I think we’ll continue training like that,” Buntin said. “We need to keep pushing. We need to spend a lot of time working on our line and artistry, then we can add lifts and things to the program.” They already include side-by-side double Axels and triple toe loops as well as a variety of lifts.

Both skaters have graduated from high school, but said that college was on hold for now. Buntin took some computer programming courses after high school and is learning languages like HTML and SQL for web programming. He plans to go to the university later on, probably working in the computer field, but plans to continue to be involved in skating. Marcoux also plans university studies. “I have been taking courses in general science,” Marcoux said. “I wanted to go into psychology because I enjoy it, but I’m not sure right now.” Marcoux now works as a waitress in a restaurant, while Buntin works at a call center at night to support their skating. “We’re aiming for six years of competitive skating,” Marcoux noted.

Marcoux likes to go to the movies, primarily romances, and enjoys cooking and trying out new recipes. “We’re both big movie buffs,” Buntin added. “We like to rent videos and stay home to watch them but we also go to the cinema a lot.” Both skaters listed Paris as the favorite place they had visited. “Europe was new and different for us,” Marcoux said. “Now I’d like to go to Italy. I also like to go down south and to Florida for fun.”

Wirtz selected the music for their 2002-2003 programs, which included “Scott and Fran’s Paso Doble” from Strictly Ballroom for the short and “Brothers” and “War” from the Pearl Harbor soundtrack for the long. “Music’s not a big thing for me,” Marcoux said. “I can skate to it as long as its fun, and I don’t listen to a lot off ice.” Buntin is the reverse. He’s working on developing an Internet website to spotlight local Toronto music and likes to go to live shows. “We’ve been to the Rolling Stones concert in Toronto,” he said, “and we saw U2. I listen to everything. I have a lot of popular music CDs and some local techno stuff. I even bought a German country music CD in Oberstdorf.” Buntin was also seen sporting an Alpine cap and a walking stick as he strolled throughout the village.

After their win at the Nebelhorn Trophy, Skate Canada assigned the new pair to two Grand Prix events to give them more international seasoning. They finished Sixth in Canada and seventh in Russia. They finished fourth at Canadian Nationals in Saskatoon, but made the international team. Hoping a change might improve their finish next season, the couple moved to Montreal last week to train with Richard Gautier.