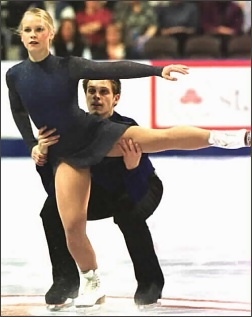 Kristen Roth and Michael McPherson are one of the young teams that the U.S. is counting on for the future in pairs figure skating.

Kristen Roth and Michael McPherson are one of the young teams that the United States is counting on for the future in pairs figure skating. They hoped to make an impact last year, but Roth fractured her hip and was off the ice for two months. For a month after that, she could only stroke and for four months, couldn’t jump. “The kids now are taking a real pounding from all the jumps,” coach Jason Dungjen noted. “There are a lot of stress fractures. The only way to get rid of them is just to rest.”

Skate America was the couple’s first senior competition after finishing first in novice pairs at U. S. Nationals in 2000, second in juniors in 2001, and third at the 2001 World Junior Figure Skating Championships. They finished ninth, but found it to be a great learning experience. “The first practice was a little overwhelming,” McPherson stated. “We wanted to sit there and watch. But we found out there wasn’t a lot of difference between second and ninth. When you get to a Grand Prix, you deserve to be there.” The couple’s goal for the 2002-2003 season was to do well at Nationals, but they finished tenth. “We need to get our feet wet again,” Roth said, “and show people we’re back and better than ever.” Roth said that they hope to go for eight more years, until the 2010 Olympics, then move on. “But there are no guarantees that we’ll continue that long,” he added.

“Everyone in my family skates,” Roth said. “My mother was a former competitor and now coaches and my dad and my brother both play hockey. My dad took me out skating on the pond behind our house when I was about two and a half.” She began skating pairs when she was eleven after a coach asked her to try it and she liked it. McPherson started when he was three. “My sister was taking Basic Skills classes and I was in the stands crying,” he said, “so my mother put me in the class too. She quit skating and now she’s an equestrienne. I tried that for a few years just for fun.”

McPherson also played center on a hockey team until he was ten, when he decided to concentrate on skating after switching to pairs. “I tried all the other things but I didn’t make it real long, I didn’t have a strong future in singles or dance, so I decided just to do pairs,” he added. Both of the skaters were already competing in pairs when they first landed triple jumps. Both landed the salchow first – Roth at 12 and McPherson at 13. McPherson noted that jumps were his favorite part of skating, while McPherson likes throws “because they’re big.”

The duo has been together for four years after previous partnerships didn’t work out. They fit together well. “She’s a great competitor. I can completely trust her,” McPherson said of Roth. “She’s outgoing while I’m kind of reclusive and laidback, but I bring a lot of humor to the partnership.” Roth said “We have opposite personalities. I’m pretty serious and uptight. He helps me to relax and let things go.”

The skaters train at the Detroit Skating Club, working initially with Mitch Moyer and Johnnie Johns, and for the last year primarily with Jason Dungjen and Yuka Sato. They train for about three hours on ice and an hour off ice five days a week. Marina Zueva is their primary choreographer. “Choosing the music is a community decision,” McPherson said. “We all put in our two cents worth and it adds up to a dime.” Roth likes to skate to “something more upbeat,” while McPherson said, “We did a ballet a few years ago. That was a real good program for us.” Their long program music is to “Slaughter on 10th Avenue”. Dungjen said “I’ve skated to it before. Yuka and I were thinking of an upbeat piece. We wanted to push them artistically and it’s a fun piece to skate. It’s a very American piece, and it’s easier to skate to something from your own heritage.” For the short program, they are using “Devil’s Dance” by John Williams, a program from Mitch Moyer.

Both of the skaters are excellent students. McPherson is already attending college at Oakland University, majoring in business, where he’s on the Dean’s List. He’s studying Russian as his language requirement. “It’s useful for skaters, but a difficult language,” he said. Meanwhile Roth, a junior at Howell High School whose best subject is mathematics, carries a straight A average and plans to get a degree in engineering. They both coach now to help support their skating. Roth teaches in the ISI program, while McPherson teaches basic skills and has a few individual students.

To relax, Roth enjoys fly-fishing, snow skiing and water skiing. She also likes ballet and has taken lessons since she was three, originally from her mother, and has danced in numerous recitals. She listens to a lot of different kinds of music and collects stuffed animals for her room. She has both a cat and a dog as pets. McPherson said “I love pugs, but I don’t have time to care for one so my parents bought me a plaster pug for my room that looks lifelike.” He said he had no serious collections, but that if “someone throws a penguin on the ice, it’s going into my room. Kristen gets all the rest of the stuff.” He said his off ice pursuits include “a sporadic mix of things including golfing, skiing and watching comedy movies. I’m a big-time car person. I like rebuilding cars.” He listens to “everything from “Led Zeppelin to the Doors to Van Halen.” McPherson loves video games and plays a lot of them on his computer as well as surfing the net. Roth said, “I have a computer but I’m not great on it. I just do email.”

Both of the skaters like to travel. Roth listed France and Scotland as her favorite trips for the scenery. McPherson said he “likes anywhere in western Europe. I’m a culturally-oriented person and I admire the artwork.” He hopes to go back and see more of Italy, while she wants to visit Alaska.