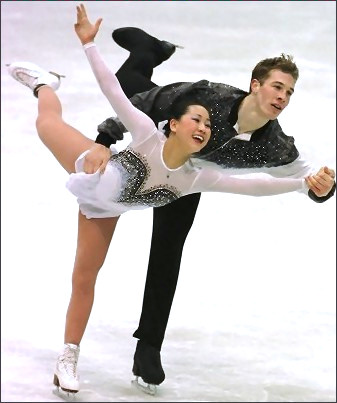 Jennifer Don and Jonathon Hunt capped their season with another bronze at the World Junior Figure Skating Championships.

For U.S. pairs skaters Jennifer Don and Jonathon Hunt, last season was a dream come true. The couple finished sixth in seniors at the 2003 U.S. Nationals and medalled at every international competition in which they competed. In their first international pairs competition and second as a team, the couple took the silver medal at the Junior Grand Prix in Scottsdale, Arizona. Then they took another silver at Trofeo Rita Trapanese in Milan to qualify for the JGP Final, where they finished third. They capped their season with another bronze at the World Junior Figure Skating Championships in the Czech Republic. “It’s been a very good year,” Hunt noted.

The skaters have only been working as a team since the end of June 2002. Both skaters competed at U. S. Nationals in 2002 with different partners, with Hunt finishing sixth with Laura Handy and Don finishing tenth with Jered Guzman. But both teams split up after that season. Don also has a promising singles career, and finished 11th in senior ladies at the U.S. Nationals this year as well as seventh at the Junior Grand Prix in Belgrade.

Their partnership began after a tryout in the spring. “Jonathon and I were both partnerless after the 2002 Nationals,” Don said. “Our coaches thought we would look good together, so they called each other and set up a tryout. The tryout went great. We quickly saw that we had the same goals in skating.” “We just clicked,” she continued. “Sometimes you just know when you’ve found the right partner. We were a good match in skating styles and personalities.” Hunt added, “We got along very well and even in the tryout, Jennifer picked things up very quickly. She has a very strong work ethic.”

Don was finishing her junior year of high school in Las Vegas, so the couple did not start to train together until after the school year had ended and she could move to Delaware. The skaters now train with Ron Ludington, Jeff DiGregorio, and Tracey Poletis in Newark. They spend almost all day at the rink. “We start about 11:30 and go until 7:30, five days a week,” Hunt said. “I skate about five sessions a day and Jennifer does six because of her singles. Sometimes, we jump on and do another session if we have time. And we add a few on Sunday. I coach from 9:00 to 7:00 on Saturday and probably 20-30 hours a week on average.”

Don began skating when she was ten. “A rink opened near my house,” she said. “I had watched skating on television and told my mom I wanted to go. I didn’t do any pairs until I was 17. I honestly don’t know how I stumbled into it, but I loved watched pairs on television and thought the lifts were really cool.” Hunt started when he was eight. “My sister had skated so my parents put me into it,” he said. “I skated pairs for eight years with Jessica and we made it to Nationals five times, finishing somewhere between eighth and tenth. We were third at one of the North American Challenge Skates. I also skated with Laura for two years but we had different skating styles.”

Don landed her first triple toe loop when she was 15, while Hunt landed his double Axel and the five triples other than the Axel in the same year when he was almost 16. He got his triple Axel just last year. Hunt competed in singles until he was 19, then concentrated only on pairs, while Don continues to skate both. “It’s tough time wise to do both,” she admitted, “but doing more made me a stronger skater this year.” Don had only skated for five months with her previous partner and had done only double twists and throw jumps. “The side by side jumps were the easiest for us to get together,” Don said. “I’d never done triple twists or triple throws. It took a lot of work to get the overall elements together. Next year we have to improve and polish them.”

Oleg Ovsiannikov choreographed their programs, with help from Angelika Krylova. “We’ll probably keep the long and get a new short,” Hunt said. “We’ll only be doing senior events next year so that will be easier than having two short programs and two long programs to compete in senior and junior. We’re working with Oleg to add more dance elements and improve our in-between skating.” Their short program is to Rachmaninov’s Piano Concerto Number 2, while their long is to “Freedom” my Michael Smith. They use “Nessun Dorma” from Turandot for their exhibition program.

“Jonathon found the music for short and I found the long,” Don stated. “We mailed music back and forth all spring until we found something we both liked.” “The short program is very dramatic and the long is more emotional and happy,” Hunt added. “I’ve mainly skated to classical music, but I like to try something different. When I’m not skating, I listen to lots of different music but mostly techno.” Don said she likes all kinds of music.

With their hectic schedules, neither skater has much time to relax. “I divide my life into S’s,” Don said,” skating, school, studying and sleeping with a little socializing and shopping. Maybe we’ll have some time to relax in the summer.” Both skaters have tried a lot of sports and both were on swimming teams, but neither does anything else now. She keeps all their stuffed animals from the competitions.

“We actually get to see more movies and stuff when we’re on trips,” Hunt noted. “We got to do a lot at Junior Worlds, like going to Prague and Auschwitz.” “Skating gives you an opportunity to see things that most people don’t get to see,” Don added. “I thought Italy was cool, especially Venice.” Both want to visit Asia.

Don is a senior at Glascow High School in Newark. “I only need two credits but I’m taking some additional courses,” she said. “My favorite subject was math. I’m trying to keep an A average and stay on the honor roll.” Both skaters plan to go to college, but haven’t decided on future careers. Jennifer plans to start classes next year. Right now, they are concentrating on moving to senior international competitions.

“We don’t have a special goal in mind for the year, but we’d like to move up at Nationals,” Hunt said. “We just hope to pull together a better pair team. “I’d love to improve the same amount next year as we did this year,” Don added.