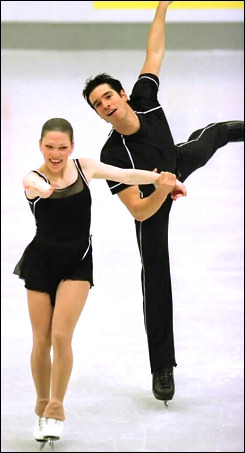 For Germany's figure skater Eva-Marie Fitze, this season has been a dream come true.

For Germany’s figure skater Eva-Marie Fitze, this season has been a dream come true. The promising youngster, has found her niche skating in pairs with Rico Rex after an up and down career in singles. “It’s such a lot of fun,” said Fitze, who is constantly smiling in practice and in competitions. The couple won the German pairs championship in their first season together and finished ninth at the Europeans in Sweden.

Fitze began skating when she was six. “My mother took me to an outside rink when it was snowing, just for fun,” she said. “One of the coaches told her I was talented and should go to Munich to train.” Both of her parents were athletic, with her father playing soccer and her mother playing tennis and skiing. “Skiing was my first sport,” Fitze said. “I’m good at skiing and snowboarding.” By the time she was eleven, Fitze had landed her first triple toe loop and on her 13th birthday, landed a triple lutz. She became German ladies champion at 14 and finished seventh at Europeans in 1997. But she didn’t enjoy it. “It was very hard to practice by myself,” she said. “I didn’t have any motivation.”

Rex was selected to train as a skater by talent scouts in East Germany when he was five. He competed in singles until he was seventeen, then switched to pairs. “When my height and weight changed, all my triples were gone,” he said. He competed with four other partners, reaching the World Championships in 1996 and 1997 with Silvia Dimitrov. Their best finish was 13th in 1997. Since they split up, Rex competed with Katharina Rybkowski and Radka Zlatohlavkova, but didn’t reach the international stage again.

At the 2001 German Nationals, Fitze told 1997 world pairs champion Ingo Steuer that she’d like to try pairs. “I didn’t even know he was a coach,” she related. “But he said he would look for a partner for me. And he found Rico to be a partner for me quickly. My first idea was to train in both singles and pairs, but after two months, I decided pairs was enough. It’s great. All of my motivation is to skate with Rico. He’s very experienced and a real good friend, always asking me how I feel. And Ingo’s a very good coach. It’s an honor to train with a world champion.”

The skaters train for about three hours a day on ice with Steuer in Chemnitz, with another six hours a week in off ice training, primarily conditioning and practicing lifts. They also have ballet twice a week. Learning the new elements for pairs was quite an experience for Fitze. “When I first started the throws, I was so scared,” she said. “It was so hard. They landings were much harder and I got a lot of bruises. It took one or two months to land a clean triple. Now I love the feeling of flying in the air so I never want to land. It was great when I landed my first double Axel. I hope we can do a triple Axel.” As for the throw twists, Fitze admitted, “we need a lot of practice. We’ve tried the triple twist in practice but we’re only doing doubles.” Jumps are no problem. “Rico’s a good jumper,” she said. “We can do a side by side triple salchow and triple toe loop. Next year we’ll try a triple flip.” The spins are the hardest element for both skaters.

Fitze has finished high school, saying that she had done very well in her studies. “But I’ve got a lot of stuff to learn,” she said. “I’m good at languages. I speak German, English and some French and Italian. I like the Italian boys and it’s easy to speak to boys.” Next year, she will enter the German Army in the sportsmen’s program, but she hasn’t decided on a future career. Sometimes she helps in her mother’s fashion shop in the center of Munich. “I’ve learned a lot from my mother,” Fitze said. “She’s a very learned tailor.” “I would like to do something on television,” she said, “commentating not acting.” Rex has completed a three-year training program to be a salesman and has spent the last six years in the German Army’s sports program, where he has attained the rank of sergeant. He plans to coach when he finishes skating.

This season, the skaters are using “Played-A-Life” by Safri Duo for the short program and selections from the “Waterworld” soundtrack for the free skate. “Ingo’s the big boss,” Fitze said. “He chose very powerful music for us to make us more powerful skaters. It’s not supposed to be beautiful and elegant.” Off ice, Fitze said she listens to “a little of this and that. I like hip hop and black music and powerful dance music.” Rex listens to everything, including classical music. He prefers to skate to “things that are not typical, modern chart music but music which is not identified with figure skating. Too many skaters use the same music from the charts.”

Off ice, Fitze enjoys going out with friends, going to the movies, and visiting Oktoberfest. She collects bottles, shopping bags from big stores, CDs, videos, and mobile phones. She also has a large collection of stuffed toys. “My room at home is so full, my parents asked me please no more toys,” she said. Rex said that his only hobby is snowboarding, both in summer and winter. He also enjoys reading, fishing, and cycling. Rex collects the accreditations from all of the competitions that he has attended.

“Our only right goal now is to make the 2006 Olympic Games,” Fitze said. “If we go, I will be so happy.” After that, Fitze would like to continue and have Rex as her coach if he decides to retire from competition.