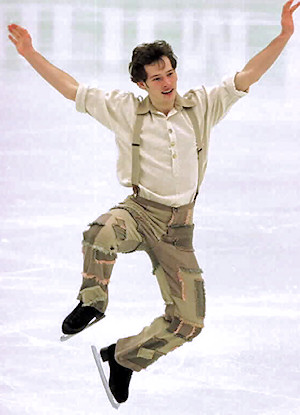 Germany’s two-time national men’s champion, Silvio Smalun, who just turned 24, is just hitting his stride as an international competitor. After beating both Andrejs Vlascenko and Stefan Lindemann at German Nationals this year, he finished 11th in his second European Championships, ahead of Lindemann. “This season, I just hope to perform well and qualify for Worlds,” he noted.

Smalun began skating when he was five. “There was an ad in the paper to get skaters,” Smalun said. “The country wanted to build up the skating program. My parents took me and I was good enough to be selected for the training. I trained with Stefan Lindemann since 1991. That normally makes me push harder.”

“I didn’t try dance or pairs since I was good enough to do singles,” he said. “I landed my first triple when I was 12. It was a triple toe loop, but my favorite jump is the flip. I’ve been practicing a quad toe and landed about half of them since December so I’ll be using it in the short and the long as a quad toe/double toe combination.” This season, Smalun landed seven triples in his long program at German Nationals, a personal best.

The two-time German champion trains in southern Germany with Michael Huth. “I train three days a week in Ulm and three days in Oberstdorf,” he said, “about and hour and a half to two hours and a half each day. I go through one full program each day, one day the short and the next day the long. In the summer, I do a lot of conditioning in Oberstdorf because of the high altitude. I train about six to eight hours a week off ice.”

Each year, Smalun changes one of his programs. Smalun is using Michael Villard’s “Charlie Chaplin” for his short program this season and Handel’s Suite Number 4 in D-Minor for his long. “The short program was the idea of my coach and choreographer,” Smalun stated. “It’s the same program I used last year. The long program is the music from a commercial in Germany. I heard it and liked it. I don’t skate to any special kind of music. If I like it, I can skate to it. But I prefer strong music, not soft music. It’s much harder work for me to do a soft character. For the short program, I had seen Charlie Chaplin silent movies but I didn’t watch any more videos to watch him. I practiced in front of a mirror trying to do moves that were typical and to give a general impression of Chaplin in the mind.” For his exhibition music, Smalun is using “Unchain My Heart” this season. For off ice, Smalun said, “I don’t collect CDs. I just pick some I like and listen to them. I just like commercial things, nothing special.”

Visiting his girlfriend is Smalun’s top priority when he’s not skating. He also likes to read computer magazines and crime stories. “Those are the most exciting and entertaining,” he said. Smalun used to play soccer and go snowboarding, but now limits his other sports activities to inline skating during the summer. He said that he enjoys visiting other countries, especially enjoying Paris and Venice. “If it’s possible to go sightseeing, I’m interested,” he said, “but my first priority is the competition.”

“I want to compete at the Olympics in 2006,” Smalun stated. “I’m still developing and I want to skate until I feel like I’m going back, then I’ll stop.” Smalun doesn’t plan to coach. He tried the German Army’s sports program for 16 months, but decided it wasn’t for him. “I needed something for my mind,” he explained. “It was boring.” So he began courses in computer science. He’s in his second year of studies, taking classes part-time, and hopes to finish in four to six years.