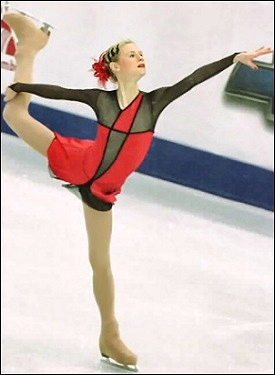 Four-time national ladies champion Karen Venhuizen is bucking tradition in her native country by strapping on figure skates rather than clap skates.

Holland is famous for its ice skaters, but the national sport of the Netherlands is speed skating, not figure skating. Four-time national ladies champion Karen Venhuizen, a tall blonde from Zuidlaren, the north of Holland, is bucking tradition in her native country by strapping on figure skates rather than clap skates. Even her own father once told his daughter, “If you quit figure skating, I’ll get you the real skates.” And Venhuizen’s not bad at speed skating, even in figure skates. “When I was in school, I always won the speed skating at 100 meters,” she said, “and I was wearing my figure skates, not speed skates. Once I had an interview in Holland, and the reporter asked me what’s my best time in the 100 meters. They sometimes don’t know what figure skating is.”

“Everyone in Holland skates,” she said. “I used to go skate outside on the canals and lakes when I was just two. We had little wooden skates or skates with two runners just for little kids. One winter when I was five years old, it was too warm and there was no ice outside so we went to an inside ice rink. There were some girls there practicing figure skating and I skated around holding onto an orange traffic cone. I liked it so I started taking group lessons, and then went to Nationals at the lowest level when I was nine. I was ninth out of 20, then the next year fourth, and then first. Then I won the novice and junior titles.”

When she was 12, Venhuizen when she landed her first triple jump, a salchow. She said the hardest jump for her is the lutz, while her favorite jumps are the toe loop and the salchow. “Whichever is not bothering me at the time,” she said. “Sometimes I can go to practice and do ten in a row. Sometimes I miss nine out of ten.” Her primary combination is the triple toe-double toe, although she has been landing triple toe-triple toe in practice. “Maybe I will include it in my program next year,” she said. “I can only do the second triple toe if the first is perfect.” Venhuizen is also trying the triple loop in both programs. “I have to get used to doing it in competition,” she said. “It’s very different than in practice.”

Venhuizen only practices on ice for about seven hours a week during the season, dropping to twice a week in the summer. “In the summer, it’s a two and a half hour drive to an ice rink,” she added. Since she was seven, she has also spent time staying at other training rinks, rather than travel too frequently during the week. Each year, she stays longer at these training centers, working with her coach and other coaches.

She also has dance practice four times a week and conditioning usually three times a week. “It varies according to what I have to work on,” she said. Venhuizen comes from a long dance background. “My mother has a ballet and dance school and children’s dance theatre,” she said, “so I know what to do. I have been dancing since I was four and performance experience was a great part of it.” Venhuizen also takes ballet classes from a Russian ballet instructor to prepare for skating. Her coach is Sylvia Holtes, who also does her choreography along with A. O. D. Muller.

Venhuizen is using “Butterfly” for her short program and selections from the “Fire and Ice” and “East of Eden” soundtracks for her free skate. “The short program was my free program from the Junior Grand Prix,” she said. “I had to withdraw due to injury, but I wanted to use the program, so we made it into my short. For the free program, we were going crazy looking for music, but we were just listening to music when we heard it. It’s a nice mix of different kinds of music, not just from one movie. I like skating where I can just feel the music.”

Her injury was a strange one. “I got new boots after last season, the same size and everything as before, but the boots were completely different. They bent my feet so I couldn’t feel my feet at all and I was scared to jump when I couldn’t feel my feet.” The problem was finally corrected in the fall, but Venhuizen didn’t start skating again until October and didn’t start triples again until November, giving her only a few weeks to prepare for Nationals. But she won anyway and went on to Europeans, where she finished 29th.

Although she qualified for the 2002 Olympics, Venhuizen couldn’t compete because of a Dutch National Olympic Committee ruling that she had to be in the top 12 at Worlds to go. She faces a similar rule each year when she must finish at least 24th at Europeans to go to Worlds. Venhuizen hopes to attend the 2006 Olympics in Italy, but said “My goal is to do my best. I want to reach the things I can reach and be satisfied with what I did. I’ll continue to skate until I don’t like it anymore.”

She is currently finishing her final year of high school, but hasn’t decided on a future career. “I had to take seven years to finish school instead of six,” she said. “Then I will take off a year to concentrate on my skating.” She’s learning English, French and German as well as Dutch so languages are obviously her forte. “My best subject is Latin,” she noted. “It was useful when we went to Italy for ten days on a school trip to see all the historical places.”

Last year, she went on holiday with her family to Crete, but she misses the summer holidays the family used to spend on an island in the North Sea. One day she hopes to see New Zealand and the Himalayas, but said, “I wouldn’t want to live there. I like to see different countries, but I’m happy to return to Holland where it’s flat and you can see everything.”

Between skating and school, Venhuizen has a busy life but still has time to go shopping, watch videos and go out with her friends. “I like horror movies and detective movies,” she said. “I want to think when I’m watching.” She likes listening to hit music and to people doing comedy in music. She plays the guitar herself. As for other sports, she used to play tennis and go swimming and loved snow skiing as a child. Venhuizen doesn’t collect anything, but keeps a few special stuffed animals she has received in her room on her bed. The remainder goes to her sister. She also uses the computer a lot, especially for school research. She also plays computer games like Roller Coaster Tycoon and racing games. “I look up competition results online,” she said, “But I don’t follow the gossip.”