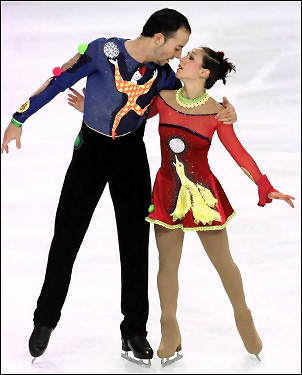 France’s Sarah Abitbol and Stephane Bernadis are not the typical pairs team and they don’t want to be. “We try to be different,” Bernadis stated. “We don’t think of a placement. We want to show that we are good and skate well so that our teammates can always count on us. But we don’t like to be constricted. Too often we invent a new move and the judges say ‘No, no, no, no, no.” “With more rules, skating stays always the same, nothing new,” Abitbol echoed.

The pair have the artistry and expression of ice dancers, but didn’t want to be dancers. “I want to jump,” Abitbol said. “I don’t like to just keep my skates on the ice.” “To be World pairs champion, you have to be half dancers, half pairs,” Bernadis added. “Like Gordeeva and Grinkov (Sarah’s favorite pair).” Bernadis emulates the skating of Artur Dmitriev (his favorites are Artur with Natalia Mishkuteniok), but he doesn’t want to do any of the famous pair’s trademark moves. “Every pair has their own moves. It’s hard to invent new things, but we are always trying,” he said.

The pair specialize in throw jumps. Their free program includes a throw double Axel, triple salchow, triple loop, and triple toe loop. “We can do any kind of throw triple jump,” noted Abitbol. “But the triple loop is my best. I always hit that one. The couple have been practicing a throw triple Axel for many years but have not yet landed it in competition. “I really don’t like spins,” Bernadis added.

The skaters returned to competition this fall after missing six months for the rehabilitation of Abitbol’s leg. She suffered a ruptured Achilles tendon in practice for the 2002 Olympics Games in Salt Lake City, which required surgery. They returned to competition at Trophee Lalique, finishing second, then took silver at the 2003 European Championships, their second silver medal in a row. They also have five bronze medals at Europeans since 1996 and are undefeated as the French national pairs champions since 1992. But they fared poorly at the 2003 World Championships in Washington, finishing 13th after stopping in the middle of their free skate due to another injury to Abitbol.

Abitbol started skating when she was six when she had a choice of swimming or ice skating for physical education. Bernadis started at eight because of his mother, English skater Donna Davies, a competitive skater who had made the British national team before an injury ended her career. The pair started skating together in 1992 after a national pairs tryout, a difficult job since France had no pairs training center. “We have nothing in France. Skating is not a popular sport there,” said Bernadis.

This season the couple skated to “The Addams Family” for the long and “La Strada” by Nino Rota for the short. Both programs were choreographed by Tatiana Tarasova. They are currently coached by Jean-Christophe Simond and train in Paris and Newington, Connecticut. The skaters, who have been married for the past few years, hope to open their own pairs training center in France in the future. Both skaters have passed their coaching tests after attending a sports education training center. “We are officially coaches now,” says Sarah, “But we don’t have much time to teach yet.”

In their spare time, Bernadis is a sportsman. “I like every sport,” he said. “I play golf with Phillipe Candeloro, swim, play tennis, everything. I even took martial arts for several years just for fun – Kung Fu, Tae Kwon Do, and Ju Jitsu. I also try to do a little bit of weight work every day.” Abitbol is not so energetic, but does swim a little. “We don’t have a lot of time except for skating,” she said. “We train all week long and then we’re dead. We want to sleep on Sunday.” The duo also like to attend the theatre, “but Sarah doesn’t like the same movies I do,” Stephane laughed. “I like action pictures; she likes romance.” “I also like science fiction movies,” said Sarah. They also listen to almost any kind of music, although Bernadis prefers modern, techno, rap, and funk, while Sarah likes popular rock.