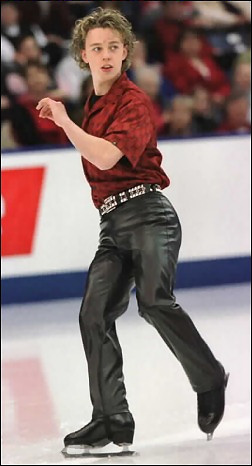 Ken Rose, Canada’s 2003 junior men’s champion, looks a lot like Elvis Stojko on the ice. The 16-year-old even trains at the Elvis Stojko Arena, Stojko’s training site. So it’s no surprise who he lists as an idol. “My favorite skaters are Elvis Stojko and Kurt Browning. Elvis because of his raw determination and his consistency. He always puts it down when it counts. No matter how much pressure is on him. He is a great champion. I like Kurt because of his creativity. He’s always trying new things and he always makes it look good! He is an unbelievable talent.”

Rose has shown the same determination, coming from behind to win at Canadians. He was so focused that he was able to avoid a pop can on the ice in the short program and still complete the required double Axel. Rose also came from behind to win the Junior Grand Prix in Scottsdale, Arizona, where he moved up from seventh to win the silver.

With his win at Canadians, Rose made the junior international team, which means another chance to compete on the Junior Grand Prix circuit next season. It also afforded Rose a chance to compete at the World Junior Figure Skating Championships in Ostrava in the Czech Republic, where he finished 13th.

Rose started skating when he was seven, becoming the first in his family to skate since his great aunt, Vera Humphreys, who skated professionally. But Rose didn’t start out to become a figure skater. “My parents put me into the CanSkate program in Newmarket just to get skating skills so I would be able to play hockey,” he said. “I never got around to the playing hockey bit though.”

Rose was 14 when he landed his first triple jump, a triple salchow. “My favorite jump is definitely the triple lutz,” Rose noted. “The combinations in my long program are triple lutz-triple toe and triple flip-triple toe. The combination in my short program is a triple flip-triple toe. Next year I’m hoping to add a triple Axel and a quad to my repertoire. I’ve tried quad toe loops and quad salchows,” he said. “I haven’t landed any cleanly yet, but I’ve had some close ones.

Rose works with coach Linda Bridge. “She’s been my only coach since I started to skate,” he said. “I’ve been with her for nine years.” She also does his choreography. “I help out with the choreography,” he added. “Linda and I put our heads together and figure out what works best. We start listening to music well before I actually need new programs. If we don’t find anything, we go into Lenore Kay’s office and listen to music there. When we find something Linda and I both agree on, then we get Lenore to cut the music. I like to skate to anything really. Last year I skated to a techno piece and this year I’m skating to a classical piece. My short program is from ‘Xotica’. It’s written by the same person who writes the music for Cirque du Soliel, Rene Dupere. My long program is to ‘Capriccio Italien’ by Tchaikovsky.” Off ice, Rose said, “I listen to almost everything — dance, rock, pop, some hip hop. But my favorite group is definitely Bon Jovi!”

Among his off ice interests are hanging out with friends and family and playing golf. “I play some other sports just for fun,” he said. “Golfing is my favorite though. He also enjoys going to the movies, especially comedies. “I like to have a good time,” he said. “Something to make me laugh.” As for collectables, Rose said, “I collect my competitor tags from all my international events and Canadians. They’re all hanging up in my room.”

“I love to travel,” he added. “My favorite trip is a toss up between Courchevel, France and Phoenix, Arizona. France was beautiful. Phoenix was like a vacation, even though I was competing! I loved them both. I don’t really get many holidays anymore. I like Florida though. I’ve been there a couple of times.”

Rose plans to stay involved in skating for life. “My goals are to make it on the World and Olympic team for Canada,” Rose stated. “If the opportunity arises to skate professionally, I will certainly take it. Then, I want to coach skating. I love to teach.”