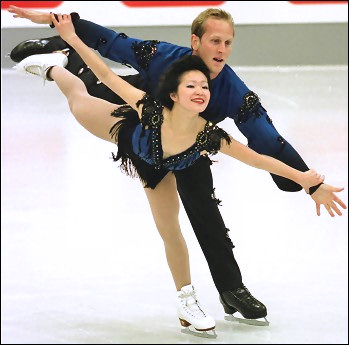 Rena Inoue and John Baldwin finished third at the 2003 U.S. Nationals and look forward to their first World appearance as a team.

Some of the most successful pair teams in the U.S. have been Japanese women and American men: Kyoko Ina and Jason Dungjen; Kyoko Ina and John Zimmerman; Yuka Sato and Jason Dungjen. And the newest team: Rena Inoue and John Baldwin. The couple finished third at the 2003 U.S. Nationals, bettering last year’s fourth place finish and look forward to their first World appearance as a team.

Thanks to Ina’s and Zimmerman’s bronze medal at last year’s Worlds, third place put Inoue and Baldwin on the World team. Their success at Nationals also keeps alive Baldwin’s record of 15 National appearances. He first made the team in 1986, but never cracked the top five in seniors until partnering with Inoue. In addition to their bronze medal at 2003 National’s, the skaters finished a respectable fifth both at the Bofrost Cup on Ice in Germany and the Cup of Russia at this season’s ISU Grand Prix series.

“I first went to the ice rink when I was only one or two,” says Baldwin. “My parents were coaches so they took me along to the rink rather than going to a babysitter. During breaks, they would hold me up and skate me around the ice. I guess you could say I was born into it.” Baldwin began competing when he was four. He won gold medals at U. S. Nationals in both novice men and senior figures, as well five medals in junior men, but has never reached higher than ninth in seniors. Internationally, he reached the podium at Junior Worlds in 1990, finishing third, an event where he first noticed Inoue who was also there doing pairs. But the two did not meet until years later.

“I was coming to the end of my singles career in 1999, but I really wanted to continue competing,” says Baldwin. “My father found Rena and convinced her to tryout with me.” In order to prepare for the tryout, Baldwin worked with coach Jill Watson, three time national pair champion and Olympic bronze medalist. Watson and Baldwin worked out for several months before the tryout with Inoue. That one tryout turned into a partnership, both on and off the ice.

Inoue began skating when she was four. “I had really bad asthma,” she said. “The doctor told my mother to take me to swimming and ice skating.” The skating won out over swimming and by the age of fifteen Inoue skated in her first Olympics for Japan in both singles and pairs in 1992. Inoue made the Olympic team again in 1994 but competed in singles only. Her last singles competition was the 1998 Japanese Nationals. “I got sick and was out for a year,” she said, “so I decided to finish up my singles career. My body just couldn’t take it. I was actually ready to quit skating altogether and move on with medical school when Johnny’s dad contacted me.” Their tryout was the first for Baldwin. He never considered any other skater good enough for a tryout. After Rena, he did not try out with anyone else.

The partnership clicked immediately for both skaters, whose birthdays are only one day apart. “He’s a good partner,” says Inoue. “He really trusts me and listens to me and we respect one another.” “A lot of pairs fight over everything,” says Baldwin. “Usually one thinks he or she is better than the other. We don’t blame each other when there are problems. Sometimes I get too intense, but lucky for me Rena is very easygoing and very selfless.”

Both skaters enjoy the interpersonal relationship in pairs skating. “It’s nice to have someone next to me,” says Inoue. “I like having someone to look at and make expressions with. And there are so many creative things to try in pairs.” “In singles, everything is so regimented and disciplined,” says Baldwin. “When someone else depends on you, it’s a whole different ballgame.” “We’re lucky,” says Inoue, “we have balance both with respect to technical skills and personalities. As long as you work at it, the technical skills will come, but it’s hard to change personalities. John cares about me and this team.”

The skaters train with Watson, three-time U.S. pairs champion and Olympic bronze medalist, two hours a day four times a week. Two of those days are spent at the Ice Palace in Aliso Viejo, California, a three hour round trip drive. They also train at the Paramount Ice Rink in Los Angeles – a half-hour from their home in Santa Monica, California. “There’s no major training center where we live so we go where the coach goes,” says Baldwin. “I like to do lifts but at first it was really scary because I had little experience. Rena and Jill changed all that and turned me into a pairs skater – not an easy task at this age.”

Watson chose the music for the programs, which includes “Carmen” for the short and “Brazil” for the long. “She wanted to accentuate our dynamic style,” states Baldwin. “We’re fast skaters, and not as classical as some. We didn’t try a classical program before but this is working for us. Carmen is a traditional program, more like a character program.” “I like Carmen because it’s fun to skate to,” Inoue adds. Their exhibition program is to another version of “Carmen.”

Off the ice, Baldwin listens to all kinds of music, while Inoue is a fan of Gwen Stefani. For recreation, Baldwin plays tennis and golf. “I’d love to play hockey, but it’s too dangerous,” adds Baldwin. Inoue enjoys swimming and is learning tennis, but says, “I’m more of a homebody. I like reading and sewing.” She reads mysteries and history books in Japanese.

Baldwin also likes to work around the house, redecorating, building things and gardening. Baldwin used to spend a lot of time on his computer. Now both skaters use their computers only for email. Inoue is a big Snoopy fan and has lots of Snoopy stuff. She also has a pet cat named Madonna.

The skaters plan to skate until at least 2006. “We want to skate as long as we can stay healthy,” Baldwin says. “I think we have a good shot at winning the national championship and the Olympics are definitely a goal. Rena will be eligible for citizenship by then so hopefully the opportunity will be there for us.” “Afterwards we’d like to move on to do tours for a few years,” adds Inoue. For a career though, Inoue, who has put her medical school on hold, plans to be a pediatrician. Baldwin has been working in the wholesale car business for ten years and plans to continue unless success in skating takes him in another direction.