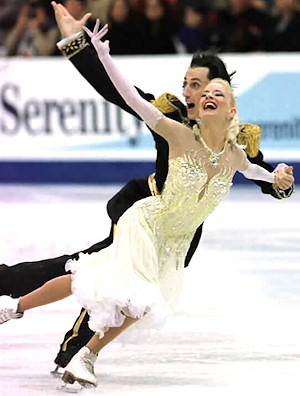 Galit Chait and Sergei Sakhnovski made history in 2002 when they became the first ice dancers from their country to medal at the World Figure Skating Championships.

Galit Chait and Sergei Sakhnovski made history in 2002 when they became the first skaters from their country to medal at the World Figure Skating Championships in Nagano, Japan, winning a bronze in ice dancing. They were also the first Israeli ice dancers to compete at the Olympics in 1998, where they finished 14th, and hope to win Israel’s first Olympic medals in figure skating in 2006. Chait, an Israeli native who was born in Kfar-Saba, was also the first Israeli ice dancer to compete at the World Championships in 1994. As the daughter of an import/export business owner who has offices in Israel, Russia, and the United States, Chait has dual Israeli/U. S. citizenship.

Chait started skating when she was eight when her parents took her to Rockefeller Center in New York for fun. She took to the sport immediately and began training at Sky Rink in freestyle. One year, Chait accompanied her father to Russia where he had organized a sports camp to bring Americans to Russia. When noted Russian coach Natalia Dubova invited Chait to try ice dancing, Galit found that “having a partner was much more interesting” and began taking lessons from Dubova, first in Russia and later at Lake Placid. She was first paired with another Russian, Maxim Sevostianov, and competed in the U. S. Nationals in 1994, finishing 6th. The couple then competed for Israel at the 1994 Worlds, finishing 28th. Chait switched to Sakhnovski, a native of Moscow, in 1995 because “Max was older and I wanted to skate longer. He did not really want to continue skating. I did it for the future.”

Sakhnovski had begun skating at four when his parents took him for training. Although he also began in freestyle, he switched to dance at eight because “it is not only a sport, but an art.” He had several partners, including Marina Anissina and won the gold at the World Junior Championships in 1993 and the silver in 1994 with Ekaterina Svirina, competing for Russia.

Chait and Sakhnovski first trained in Russia with Ludmilla Buytskova and Elena Maslenikova, then moved to Monsey, New York. Soon afterwards, they began training at the University of Delaware with Natalia Linichuk and Gennadi Karponosov. Chait said that “Natalia taught us to work really hard and to put in the hours you need to win. Going in to her, we weren’t really a team, just two skaters going in different directions. In our two years there we learned a lot from them about stroking and basic technical capabilities and came together as a team.” The couple then decided to move to Connecticut to train with Tatiana Tarasova and Nikolai Morozov. “Tatiana really improved our presentation and our choreography. She taught us to do every move to its maximum,” Chait related.

Before the 2002 Olympics, the dancers decided to return to the tutelage of Natalia Dubova. “We wanted better edge quality and better lines and we needed to improve our compulsories,” Chait explained. “We learned a lot of things about technique that we did not know before – edges, body placement, weight transfer, and other things that are essential to do compulsories and be better skaters. Natalia uses a different technique that we had not done before. We had better body form and we learned something new every day.”

Dubova choreographed both the original dance and the free dance for their bronze medal performance in 2002. Chait explained “We brought her the music for the free dance that we wanted to use, Fiddler on the Roof, but she told us to find something else. She suggested this type of Jewish folk music and we spent some time looking for a good composition.” For the original dance, we used Antonio Carrera’s Malaguena. The flamenco was very fast, then we switched to the paso for the parallel footwork. It was very powerful. I love the tango from Moulin Rouge. It’s very passionate and I liked it the best of those we heard. We worked a lot with competitive ballroom dancers to get the right feel for the paso and the tango.”

The season turned out to be the highlight of their careers. In addition to the bronze medal at Worlds, they took silver medals at the Goodwill Games, Skate America and the Cup of Russia, finished fifth at the ISU Grand Prix Final and the European Championships and sixth at the 2002 Olympic Games.

After the season, the skaters decided to switch to Evgeny Platov as their coach, partly because they could train closer to Chait’s New Jersey home. But last season was not as successful as the skaters adapted to Platov’s coaching style. They won a silver medal at Skate America and a bronze at the NHK Trophy and again finished fifth at the Grand Prix Final, but they slipped to sixth at Europeans and sixth at Worlds. Ivan Fadeev choreographed their original and free dances, but their free dance to “Lord of the Rings” was not as successful as they hoped and by Worlds, the couple had returned to using their 2000-2001 program, “Variations on the Theme of Paganini” by Andrew Lloyd Weber.

After Worlds, they noted that they still planned to continue until 2006. They want to continue to do ice shows and coach after that, but Chait has a bigger goal. “My dream is to open a rink and have my own skating center. I’d like to have a big school so kids can have a good foundation,” Chait stated. “We like to coach and we coach when we have time. It’s something I’ve always wanted to do. Hopefully we can work together. Sergei’s very good with kids too and likes to do choreography.” To prepare, Chait took classes in psychology and business at the University of Delaware. Sakhnovski is a graduate of the Central Moscow Institute of Physical Education.

Although he responded “sleep” when asked what he did off ice, Sakhnovski is actually quite adept at model building. He constructs model Porsches, Ferraris, Lamborghinis and “would like to have a few real ones in his garage.” Both skaters play tennis and Sergei occasionally gets in a game of soccer. He likes to listen to popular music and rock, including Elton John and Michael Jackson. Galit likes French and Russian music and hard rock. They also like going out to dance. Both Galit and Sergei have learned to use her computer. “Now I’m on the computer all the time, going to all the skating sites and everything,” Galit stated  They both like to read a lot, especially on long plane trips.

But Chait noted some trepidation about traveling. “Now there’s no skates on board. That never happened before, even on El Al and they’re really strict. It’s difficult because sometimes luggage and costumes don’t make it. I’m hoping for the best but I don’t feel comfortable when my skates aren’t with me.”

“My favorite travel spots are in Europe and Asia,” Galit stated. “I fell in love with Vienna and Paris. The architecture is beautiful and the atmosphere uplifting. In Japan, I could eat sushi all day. I would love to visit Spain and Italy but only as a tourist. During the competition, I can’t take in all the beauty of a country while thinking about skating.” They did take a few weeks off last summer, with Galit going to Florida and Sergei to Russia before meeting for a few days in St. Thomas. At the Goodwill Games, the skaters enjoyed visiting the wildlife parks. “I love koalas and kangaroos,” Chait noted. Sergei’s favorite spots are Russia, France, Italy and Switzerland.

Other interests are on hold until after the 2006 Olympics. Galit claims she has “no energy for shopping any more” and Sergei no longer has time to draw. “We have tunnel vision to keep our minds on skating,” says Galit. “That’s what’s most important.”