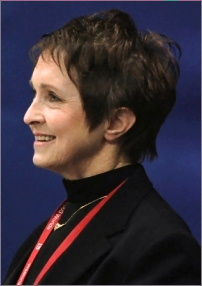 Russian pairs have won every Olympic pairs championship since 1964, even though the 2002 results were shared with Canadians Jamie Sale and David Pelletier. Renowned Russian coach Tamara Moskvina explained “we are so successful because we have developed traditions and because we work in the same manner as we have in the past. We keep the couples progressing, even when they are making mistakes. We don’t just change partners when things are not going well.”

Thirty years ago, Tamara Moskvina was competing in pairs at the Olympics in Grenoble with her partner, Alexei Mishin, while her husband, Igor Moskvin, coached them and the Protopopovs. In recent years, Moskvina has been back at the Olympics, coaching two couples herself. That includes gold medalists Oksana Kazakova and Artur Dmitriev and Elena Berezhnaya and Anton Sikharulidze as well as U.S. national champions Kyoko Ina and John Zimmerman.

Moskvina explained, “I only want to train two pairs. Then I can move them very quickly to the podium. To teach more would be slower. In my system, I manage everything for the skaters. I am the coach, the choreographer, the doctor, the costume designer, the planner, everything. I take a great role in costume design. I look through magazines, buy design albums, and do lots of things to arrange costumes. Something tasteful, that matches the music and the program. Some judges are more conservative. The costumes must be appropriate.”

She continued, “I like to choose music that suits the style of my skaters. I want something different from other skaters and different from previous years. I try new directions, things which will be accepted by the judges and the public. And I try to find music which will inspire the skaters.” Sometimes luck plays a role in the selection of music. “In Lausanne one year, I was so disappointed after Artur and Oksana had a disaster in the short program that I just walked in town. I went into a music store and the first CD I picked up had the “Sad Waltz” on it. I knew it would be perfect for a program for them and I made it into their exhibition program,” she explained. For herself, Tamara prefers classical music, especially Rachmaninoff and Grieg.

Moskvina designs the programs for each of her pairs, then uses a choreographer to add perfection to the movements. More experienced skaters, such as Dmitriev, contribute substantially to the choreography. “When they are younger, most skaters don’t do much with the program, but as they learn, they want to try more different things,” Moskvina stated. “My ideas come from everywhere. I watch ballet, gymnastics and other skaters. Sometimes I see someone do a move that I think can be developed another way and I use it.”

One of those moves is an unusual spin that Dmitriev has performed with both Natalia Mishkuteniok and Oksana Kazakova. The woman bends down and holds onto the spinning foot while Dmitriev raises her other leg straight up. Moskvina said she first saw a similar move performed by a Canadian couple and that she adapted the move to fit her pairs. Moskvina’s students also attend acting classes to improve their expression on ice.

Moskvina was born during World War II and had to be evacuated when St. Petersburg was besieged. A few years after the war, when she was 10, her father bought skates for Tamara and her two sisters. Her friend, Irina, a talented skater who was very popular with the boys, encouraged Tamara to come skate with her and convinced her coach, Ivan Bogoyavlensky, to coach Tamara. “I was not talented. I was like an ugly duckling,” Tamara remembered. “But I looked up to Irina and I wanted to be like her. At competitions, Irina would always finish first and I would be second.” But Moskvina was determined to succeed. The rink had no changing area and she didn’t have skate guards so she walked a mile from her home to the rink on her toe picks to practice.

“I loved my first coach. He gave me the love for sport and he cared about me,” Moskvina remembered. In her late teens, Igor Moskvin, a former Soviet pairs champion, began coaching singles at Tamara’s sports club, teaching both Moskvina and Alexei Mishin. Under his direction, she won the USSR ladies championship five straight years from 1962 through 1966 and competed at Europeans in singles, but never at Worlds. She even performed a Biellmann spin.

In 1964, Tamara and Igor were married. A year later, he suggested that she try pairs. Knowing that she had reached her peak in singles and anticipating a new challenge, Tamara paired with Alexander Gavrilov, finishing fourth at the Nationals in their first year. But Gavrilov retired, so Igor paired Tamara with Mishin. “I have good memories about our times together because we always joked and made fun of everything, and we never quarreled,” she said.

Moskvina and Mishin were considered to be a blend of both artistry and athleticism. “We were athletic because we did more elements than the Protopopovs,” Tamara said. “We had another style, more modern. We even skated to French music.” In 1968, the duo competed against the Protopopovs and the team of Irina Rodnina and Aleksei Ulanov at the Europeans for a chance to compete at the Olympics. Fifth after the short, they performed well in the free program, then heard that the Soviet pairs had finished 1st, 2nd, and 5th. Assuming they were fifth, they began changing until someone ran to tell them they were second. Tamara got her skates back on in time, but Alexei had to attend the medal ceremony without them.

The results were different at the Olympics. In the short program, a poor side-by-side camel spin by Tamara dropped Moskvina and Mishin back in the pack. “I was in a fog,” she said, ascribing her anxiety to a lack of confidence. “I understood at once that my dreams and plans to be among the prize winners would not come true. I do not even remember our placement after the short.” The couple finished fifth overall.

But the experience helped Moskvina when she began to coach other pairs. She explained that she had always been very nervous in competitions, even when she was skating singles. “I always fell not less that twice during my free skate,” she said. But the way that she dealt with that nervousness then showed why she is such a superb coach now. “I read books about psychology and mental preparation. I developed a method to deal with the nerves,” she said. Now she employs similar methods to help her students prepare for competitions. “My best quality is getting the skaters to peak at the right time. I try to add a little each time, improving their technique, physical condition, psychology, and determination,” Moskvina noted.

After the 1968 Olympics, Moskvina and Mishin skated one more season. Her favorite moments as a competitor were beating the Protopopovs for the first time in the Russian Nationals, then winning the silver medal at Worlds in 1969 in Colorado Springs. “But I was 28 and had to either defend my thesis and get the PhD or forget about it,” she stated. “And then Igor and I wanted to have a family. I knew that one more medal wouldn’t give me more satisfaction.”

Moskvina had been an excellent student in physics and mathematics as well as physical education. When she completed high school in 1958, she had the opportunity to either study coaching or science. Although she had won a silver medal in science, her father told her that there were lots of good scientists but not too many good coaches, so she chose coaching. She received her PhD in 1970 from the Academy of Physical Education and Sport.

Moskvina decided to coach pairs because it took less time. “There were no compulsory figures or time-consuming dances to learn.” she said. “Since pairs practice never started before 11, I had time to spend with my family.” Moskvina doesn’t miss teaching in the other disciplines. “I am very happy with my pairs,” she said. “I don’t think about the rest. Pairs skating requires an ability to teach skaters a high level of singles jumps, as well as matching skaters to do throws and lifts. You have to balance the skaters’ strong and weak points. It takes a lot of creativity to do pairs. It’s the most artistic thing to do.”

“I will keep coaching as long as I enjoy it,” Moskvina continued. “Originally, I had to ask for the 12-year-olds to be sent to me, but now the best skaters just come to me. Actually, Artur did not come first to see me. He came to see my husband to skate singles when he was 16. But my husband was away so he came to me instead and I taught him to do pairs.”

The hectic pace of recent years has taken its toll on both skaters and coaches. “I’m changing continents like I used to travel from Moscow to St. Petersburg,” she said. She noted that the expanded competition schedule had both advantages and disadvantages: “There are too many competitions. It helps to keep the skaters in shape. They don’t go down too much between events. But it’s hard to reach a peak every month. And you have to be very organized to find time for development of new programs.” Although Moskvina enjoys traveling, nowadays she has time only to work on her frequent trips to competitions.

But loyal skating fans are a positive aspect of increased exposure for skating. “The skaters are really inspired by the true fans. For my skaters, having an international fan club to support them is a great inspiration. They enjoy meeting with the fans and having activities with them,” Moskvina noted. “One of my favorite things is when I am watching my skaters, I am also watching the faces of the audience to see how they react. It’s wonderful when I see them watching attentively.”

Many have wondered why the skating of Moskvina’s pairs affects viewers so deeply. They seem to capture the essence of skating, its very soul. Perhaps it’s because Tamara imparts a sense of wonderment to her skaters that she still remembers from her youth — before the competitions, the judges, and the medals — a memory of one simple ethereal experience. “I remember when I skated in an open, outdoor rink in a park,” she recalled. “It was very cold and around the ice rink there were many, many trees that were covered with snow. And this was like a fairy tale, and I was skating and being like in a fairy tale with those trees around. This was a beautiful picture, and it still stays in my memory.” Just a girl on her skates in a winter wonderland.