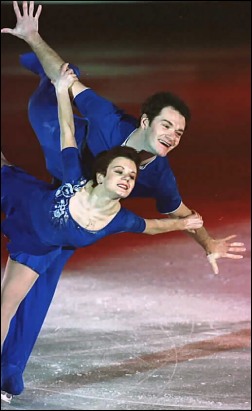 Russia’s Maria Petrova and Alexei Tikhonov are one of the odd couples of figure skating.

Russia’s Maria Petrova and Alexei Tikhonov are one of the odd couples of skating. It’s not just that he’s a giant and she’s tiny. Their personalities are exact opposites. The gregarious Tikhonov is so outgoing that he’s frequently seen in the stands chatting with fans, entertaining children, and kidding with the media. He’s also generous to a fault, often giving away pins and other souvenirs from competitions to those he knows. Petrova, on the other hand, is quite shy and is rarely seen in the public areas unless Tikhonov is by her side. While Tikhonov is proficient in English, Petrova speaks very little.

Tikhonov began skating when he was five years old. “Skating was very famous in Russia at that time,” he said, “so my parents brought me to the skating school. I was 13 or 14 before I understood that I liked it and wanted to skate all my life. Before, I was more interested in other sports like soccer and hockey. I switched to pairs when I was about 15 and a half years old. I was very tall and my triples were not so good. I only had three triple jumps.”

Petrova began skating when she was seven. “I was sick as a child and the doctors told my parents to bring me to try some sports,” she said. “They wanted me to do figure skating because it’s not just a sport but also art. When I was in singles skating, I always wanted to do pairs. I liked Gordeeva and Grinkov and wanted to be like them. Pairs is much more interesting than singles.” She switched to pairs at 13.

Lifts are Tikhonov’s favorite elements because they are the most fun for him, while Petrova prefers throws. “Throws are easiest for me,” she said. “Lifts are more dangerous. This year when we were learning the throw triple loop, it was really fun.” For side-by-side jumps, the double lutz and the triple toe loop are their favorites. Petrova is the better jumper, having mastered her triple salchow and triple loop at eleven, while Tikhonov didn’t land his first triples, the salchow and toe loop, until he was 14.

Tikhonov competed for the Soviet Union with Irina Saifutdinova, with whom he won the bronze medal at Junior Worlds in 1998. But she quit to get married. “After my partner married, there were no girls at my club for pairs,” he said, “so the head of my club invited me to go to Japan. I stayed there for two years, but I was alone in my apartment. I used to go to the Russian Embassy just to talk to people. I tried to learn some Japanese but it was very hard.”

“So I quit to do shows,” he continued. “I spent three years with Tatiana Tarasova’s shows around Great Britain .I skated with Torvill and Dean in their shows and at Cypress Gardens in Florida. But I didn’t have very good partners. After five years, I thought that I hadn’t done very much with my skating. I like competitions a lot. It’s a very different science when there are judges. Then Maria’s coach called me and asked me to skate with her, so we started.”

Petrova had formerly skated with Anton Sikharulidze, winning the World Junior Championships twice in 1994 and 1995. When he left to skate with Elena Berezhnaya in 1996,she skated with Teimuraz Pulin, finishing second at Junior Worlds in 1997 and sixth at Russian Nationals in 1998. She and Tikhonov have been skating together since 1998, winning the European Championships in 1999 and 2000 and the World Championships in 2000 and finishing sixth at the 2002 Olympics. This season they finished third at Europeans, the ISU Grand Prix Final and Worlds.

They plan to skate together for this season and next, possibly until Worlds in Russia in 2005. “That’s enough,” Tikhonov said. “Then we are going to be coaches. Maria is finished with coaching school, but I am not. I studied in Moscow but it was not so interesting to me. Now I know I have to finish.”

Sergei Petukhov and Alexander Stiopin choreograph the couple’s programs. This year, they used “Blues Under the Rain” for the short program and music from “Chess” for the long. “Maria and I listen to music and make a decision with our coaches,” Tikhonov said. “Our coach’s husband, Nikolai, has a large collection of music to try. We found the music in his collection. The short program is some light blues.” They also have an exhibition program using the soundtrack of “Black Cat, White Cat“. “It’s a funny movie about gypsy life,” Tikhonov said. “It was Sergei Petukhov’s idea. We are also working on a program using Russian folk music that we used two years ago. We really liked it.”

The skaters train in St.Petersburg with Ludmila Velikova, with about two hours on ice and two hours off ice training every day. In addition to ballet classes three times a week, they do a lot of warm-ups of lifts and jumps off ice in front of the mirror. In the summer, they also rollerblade.

For fun, Petrova enjoys live plays at the theatre, primarily dramas, and the ballet. She also likes to read. They both watch Russian movies and listen to all kinds of music. Tikhonov still plays a lot of sports including basketball, bowling, pool, and tennis. They both play soccer and hockey and ski in the winter on small slopes near St. Petersburg. She still has a lot of stuffed animals at home but they both give many to the children of their friends. Her favorites are dogs and bears and a frog from Japan. She also has a pet Cocker Spaniel, but has to leave it with her mother. Tikhonov is also fond of photography and is often found sightseeing after the pairs have finished their competitions.