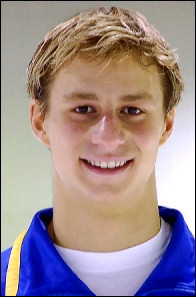 Filip Stiller listed his short-term goal as being in the top ten in the European Championships with a long-term goal of being a medal-contender in the big championships.

Filip Stiller started skating when he was only three years old. “I started because my sister, Veronica, wanted to,” he said. “My parents didn’t know what to do with me, so I started to skate as well. That is why I started so early. My sister was six and I was three. My sister stopped skating in 1999. She was in France and practiced in Champigny with the Gailhaguet team (when it still existed). She was fourth at Swedish Nationals in 1998 and 1999, and seventh in the Nordic Championships in 1998.” Stiller has stayed in skating, winning the Swedish championships in 2002 and 2003.

It took him ten years before he mastered a triple jump. “I think I was 13,” Stiller said of his first triple. “It was the triple salchow. I landed the triple loop cheated before that, but I guess it doesn’t count.” He has been practicing quads, stating, “I have been pretty close. My goal is to be the first Swede who ever does it.” The salchow remains his favorite jump, but he doesn’t use it in combination, opting instead to use triple lutz/triple toe, triple Axel/double toe, and triple flip/half loop/triple toe in his long program and triple flip/triple toe in the short. “I have landed triple lutz/triple loop in practice but it is too risky to put in the program,” he explained. “The Axel isn’t consistent enough for a 3-3 combo.” For next season, Stiller said, “I hope I can land the Axels more consistently and land the quad sal and/or the quad toe.”

Stiller currently trains with Evgueni Loutkov, his coach for the last four years. Evgueni’s wife Galina Loutkova choreographs his programs, but Stiller does the choreography for his step sequences. Their step sequences are one of the things Stiller most admires about his three favorite skaters — Alexei Yagudin, Alexei Vassilevsky, and Stannick Jeanette. Last season, he used “Crouching Tiger, Hidden Dragon” for the short and “Austin Powers” for the long. He likes to skate to “mostly new music, film music, and so on,” he said. “I listen to lots of music and decide what is good for me together with my coach.”

Stiller listed his short-term goal as being in the top ten in the European Championships with a long-term goal of being a medal-contender in the big championships. He doesn’t currently plan to become a professional skater although he said he might coach at the lower levels. “My dream is to become a journalist, either in politics or sports,” he said. He is studying political science in college. “It takes a lot of time but I like it, he said. “I learn so much from it.” Among his other interests, he said he liked to “learn and find out things about languages.”

Off ice, Stiller said, “I love what’s on the top charts. Missy Elliott, Lauryn Hill, and Alanis Morissette are examples on my favorite artists. I really like the super-hero movies and some of the sci-fi movies too, for example Lord of the Rings, Spiderman, X-Men, and Matrix. I hate horror movies though.” He also reads newspapers, weekly entertainment magazines, and thrillers. He doesn’t have any special things that he collects.

“I never go anywhere because of my poor finances so I stay here in Gothenburg and hang out with my friends instead,” he said. “There is no time for other traveling except for figure skating competitions. I once went to San Diego with my mom and that was a lot of fun!” He would like to visit Australia.