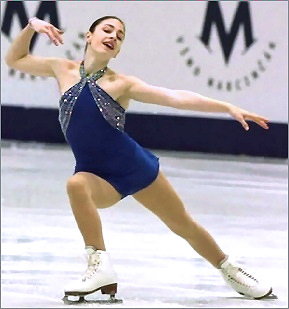 Louann Donovan, a 16-year-old from Boston, Massachusetts, is unusual in that she actually started skating to play hockey.

Louann Donovan, a 16-year-old from Boston, Massachusetts, is unusual in that she actually started skating to play hockey. When she was five, she played center on a boy’s team for a season. “I watched the 1992 Olympics on television and figure skating looked like a lot of fun, so I wanted to try it,” she said. “I finished the hockey season and started Basic Skills lessons. I wasn’t interested in any other sports.”

Donovan finished tenth at the 2003 Junior Worlds after finishing sixth the previous year. “It wasn’t my best effort, but I try to learn from every competition to make myself better,” she stated. “It makes me want to come back next year and do better.” Earlier in the season, Donovan was second at the Junior Grand Prix in Montreal in 2002. After winning the 2002 U.S. junior ladies championship, Donovan moved up to senior ladies at U.S. Nationals, where she finished ninth in 2003. “I had a great experience at Nationals,” she said. “I was able to show the whole package.”

She successfully landed a triple salchow at eleven, and then added her double Axel soon afterwards. “I landed all the triples except the Axel by the time I was 14,” she said. “My favorite jump is the triple flip. I’ve landed triple salchow/triple loop in practice, but don’t have it in my program. I hope to have it or a triple loop/triple loop, whichever is progressing faster, in my program next season. The triple loop is one of my better jumps.” This season, Donovan used a triple flip/double toe in the short with a triple toe/triple toe and triple salchow/double toe in the long. “I need to add some triple-triples for next season,” she noted.

For the 2002-2003 season, Donovan trained in Dennis, MA with Mary and Evy Scotvold. She worked on ice for three hours a day six days a week, then took Pilates and gym classes twice a week. “I also ran outside with my trainer,” she added. Mary Scotvold and Cheryl Franks choreographed Donovan’s programs. During the summer, Donovan decided to switch coaches and now works with Peter Johansson and Mark Mitchell at the Skating Club of Boston. Lori Nichol will choreograph her programs for next season.

Last season, Mary Scotvold found the music for both programs. “For the short, Mary wanted something that was slow and elegant and pretty,” Donovan said. “We wanted a different look for my senior long program. I usually change both programs every year, but it’s a bit of a challenge going back and forth between junior and senior so I may keep the short for next season.” She skated to The Given by Michael Smith for the short and Capriccio Espanol by Rimski Korsakov for the long. “For the previous season, I picked the music for my junior short program. I was visiting my Dad on a job and his client was playing the music in the background,” she said. “It was Bolero.” Donovan listens to a lot of different kinds of music, but prefers hip-hop and rock and roll. She used to play the piano, but no longer takes lessons.

“I like to go to the movies with friends and have fun,” she said. “It’s important to balance out everything.” She prefers comedies and action movies and likes to read. Among her other interests are shopping and golf. From each competition, she buys a mug with the name of the city on it and keeps all of her stuffed animals. “They’re in my room everywhere,” she said. “I had them on one chair but now there are too many.” One mascot that she has to give back is Clacky, a Pokemon dragon that represents her friends from the Skating Club of Boston. The toy gets thrown to all the club skaters after they compete. Donovan also has an unusual pet, a hedgehog named Toepicks.

Although she likes to go on vacation with her family to Cape Cod, Donovan enjoys raveling to other countries for skating. Her favorite trip was to Hamar in Norway. “I’d like to go to China one day,” she added.

Donovan is a junior at Newman Preparatory School in Boston. “I get As and Bs mostly,” she said. “I d best in sciences because I like science.” She plans to attend college, but hasn’t selected a major or a career. “I’d also like to coach someday,” she said.

Donovan has no specific timetable for her skating career. “As long as I love it, I’ll do it,” she said. She would like to eventually compete at the Worlds and Olympics, but is focusing on the short term. “I want to develop my presentation and he artistic side of my skating to do well at Nationals,” she elaborated. “My presentation in relation to the crowd and the judges gets much better each time, but I need to keep improving artistically.” As for next season, she stated, “I may do either the Junior or the Senior Grand Prix. “I haven’t decided.”