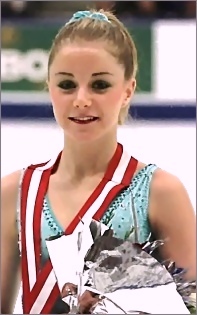 For Canada’s 2003 junior ladies silver medalist, Amanda Billings, it wasn’t a hard fall from a missed jump that almost demolished her season; it was a fall from a bucking horse last summer. “I went back home to visit one of my friends,” she explained. “I used to ride horses before, but we were galloping along and I lost control and couldn’t make the horse stop. I guess he got mad or something because he threw me off and I landed on my arm. I broke both of the bones in my forearm and had to have surgery, two plates and nine screws. I had a cast on my arm for three months so all I could do was stroking.” She still managed a silver medal at the Mladost Trophy in Zagreb in the fall and finished 17th at Junior Worlds.

The talented 16-year-old began skating when she was six. “I lived in a small town in Hanna, Alberta,” Billings said. “All we had was a swimming pool and a skating rink, so we went swimming in the summer and skating in the winter. My sister and I both skated. She did synchro until last year. I haven’t done anything except singles. I like singles because it all depends on me being out their by myself and showing everyone what I can do.”

Billings landed her first triple toe loop when she was 12, but her favorite jump is the triple lutz, which she uses for her combination in the short and long with a double toe. She also uses a triple toe/double toe in the long. “My goal for this season was to get the triple lutz in my programs and land a triple flip,” she said. “I’ll be starting on a triple Axel when I get back from Junior Worlds.”

She trains in Calgary with coach Sharon Lariviere. Billings practices for three hours a day on ice six days a week and does Pilates and running for her off ice work. “I used to compete in track and field for my school,” she said. “I did the 100 and 200 meter sprints, long jump and triple jump.”

A strong student, Billings maintains a 95 average in tenth grade at Bishop Hill High School. “I’m really good in math and science,” she said. “I definitely want to go into something with science. I want to stay in sports, but I don’t want to be a coach or a choreographer, so maybe I’ll be a sports doctor.”

Last season, Billings skated to “Horoboshko” for the short and “La Gitana” and “Tambourin Chinois” for the long. The music for both programs was selected by Lariviere, although Bernie Ford did the choreography for the short and Cindy Stewart did the long. “Amanda’s very feminine and delightful, so I didn’t want anything to heavy for her,” Lariviere stated. “We try to change both her programs every year to try out new things for her.” “I like to skate to music that is interesting and unusual,” Billings added. For her exhibition program, Billings used “Chopsticks” by Liberace.

Off ice, she listens to hip-hop and rhythm and blues. She used to play the flute until last year. “I didn’t want to do high school band,” she said. “It’s time consuming and I didn’t have the time after skating.” For fun, she likes to snowboard, watches comedy movies and thrillers, and reads scary horror books, especially Steven King novels. She also likes to use her laptop. “It was my birthday and Christmas present,” she said. “I email my friends and do some surfing, looking at skating sites and doing research for school.” She gives her stuffed animals to relatives and donates some to charities.

Her favorite trip was to Italy. “I liked the weather and the ice cream,” she said. “That’s my favorite food. We got to go to Verona and Venice. Venice was amazing. It was so old and different. And we got to see the Coliseum in Verona.”

Next season, Billings hopes to make seniors. “I’d like to compete at Nationals in seniors and do my best there,” she said. “Eventually I’d like to go to the Worlds and the Olympics and I’d definitely like to be a show skater.”