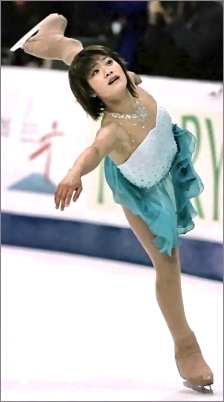 Japan’s Yoshie Onda jumped into the 2002-2003 figure skating season with power, winning the Bofrost Cup in Germany and the NHK trophy in Japan, and taking the silver at Trophee Lalique in France.

Japan’s Yoshie Onda jumped into the 2002-2003 season with power, winning the Bofrost Cup in Germany and the NHK trophy in Japan, and taking the silver at Trophee Lalique in France to easily qualify for the ISU Grand Prix Final in St. Petersburg. She also finished second at Japanese Nationals, her best finish there. But an ankle injury forced her to withdraw from both the Final and the Four Continents Championships, at which she had won bronze medals in both 2001 and 2002. Onda recovered in time to compete at the World Championships in Washington, DC, but was still not at full strength. She finished 11th, down from her fifth place finish in Nagano in 2002. She also finished 12th at the Olympics that year.

Onda began skating when she was five. “I went to skate from my school with a lot of other kids,” she said. “I didn’t start lessons until I was eight, when my mother took me. She was looking for something for me to do. She took me to piano school but I could never sit down in front of it. So I had two choices, skating or gymnastics and I liked skating more.”

Her coach is Machiko Yamada, who also coached Japan’s Midori Ito when she landed her triple Axel. Onda practices for at least three hours every day on ice, except for Saturday and Sunday, when she only practices for two hours. Off ice, she said she only takes ballet class and goes to the gym once or twice a week. She started ballet when she was eleven. “At first I hated it, but it’s OK now,” she said. “It helps me move better.”

Onda’s programs are choreographed by Mihoko Higuchi and David Wilson. Last season, she used Love in Slow Motion for her short and Concerto for Cello and Orchestra and Serenade for the long. For her exhibition program, she used Seaside Rendezvous by Queen. “I like to skate to something cheerful,” she said. “Off ice, Onda listens to Western pop music and likes Michael Jackson, the Backstreet Boys, and Eminem among others.

Onda said she doesn’t do much outside of skating. “I don’t collect anything or go shopping or to the cinema,” she said. “I just do a lot of homework. I love computer games and enjoy going to the Internet café and reading comics online.” She doesn’t play any other sports now but used to play badminton and soccer. “I tried to play tennis but I just hit a home run with my tennis racket,” she said.

She likes to travel and especially enjoyed her travels to Germany and France. “I liked Gelsenkirchen because it was small and nice and I liked all the historic buildings in France,” she said. “I’d like to go to Australia and India and see the Pyramids in Egypt, something different than what I’ve already seen.”

Onda plans to continue competing until the Olympics in 2006. “I don’t have a special goal for my whole career,” Onda stated. “I try to take it year by year and see how I progress, then start thinking about the next year. Once I wanted to be a professional skater, but once I started doing shows with show lighting, I’m not so sure. I’m in my third year at the university now, just general studies. I don’t have any favorite subjects but I’m thinking of studying to be a physio trainer.”