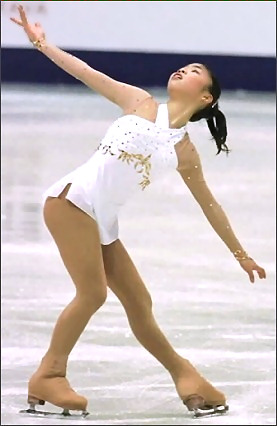 Beatrisa (Bebe) Liang, who just turned 15, has already been figure skating at the senior level in the U.S. for three years.

Beatrisa (Bebe) Liang, who just turned 15, has already been skating at the senior level in the U.S. for three years, finishing sixth, ninth, and seventh. But she hasn’t been able to compete in international senior events because of her age. “Hopefully, I’ll get some Senior Grand Prixs now that I’m age-eligible,” Liang stated. “I’ll probably do Junior Worlds again and that’s it for juniors.”

She skated well on the Junior Grand Prix circuit, with silver medals in both of her events last season in Beijing, China and Scottsdale, Arizona. Her only gold medal so far is the 2000 Triglav Trophy. Liang finished fourth at the 2003 JGP Final and sixth at Junior Worlds, after finishing fourth there the previous year. “I injured my hip in practice before I came to Junior Worlds,” she said. “It hurt most on the triple loop. We cut back on my practices and my coach said I could do an easier program at Junior Worlds if I wanted, but I aggravated the injury doing a triple loop in practice in Ostrava, so it was hard to jump.”

She started skating at six. “My older sister wanted to skate so my mom took both of us skating,” she said. “She did it just for fun and quit when she went to college.” Liang landed her first triple salchow when she was ten. “I like jumping,” Liang continued. “It’s exciting learning new things. My favorite jump is the toe loop. That’s the easiest.” Liang is using a triple flip/double toe in her short program and adds a triple lutz/triple loop in the long. “I’ve played around with some other triple-triple combinations. Last year I did triple toe/triple toe and I’ve tried triple flip/triple toe. It’s hard to fit in all the jumps with all the rules. I worked on the triple Axel a little bit this season, but we didn’t put it in the program.”

Liang practices in Simi Valley, California with her coach, Tiffany Chin, a former U. S. national champion and bronze medalist at Worlds. “Tiffany’s the only coach I ever had,” she said. “Liang skates for three hours a day five days a week and an hour and a half on Saturday. She also does an hour in the gym and an hour of ballet each week during the school year. “In the summer, I go to two hours,” she added.

Chin and Alex Chang choreographed Liang’s programs for this season. She used “Duel,” performed by Bond, for her short program, “Tchaikovski’s Violin Concerto in D Minor for the long, and “Come What May” from the “Moulin Rouge” soundtrack for her exhibition piece. “Usually at the end of the season, my Dad and my older sister are looking for music for next year,” Liang stated. “Then when they find something I like, we ask Tiffany if she likes it. Sometimes she finds music and asks us how we like it. This year, Tiffany found the short and my Dad found the long. I usually change both of my programs every year. I like to skate to a lot of variety. Mostly I use classical for the long and something quicker for the short.” Off ice, she listens to mostly pop music and plays the piano.

When she was younger, Liang was also a gymnast. “I did gymnastics from when I was four,” she said, “but when I was seven or eight I had to chose between gymnastics and skating. I liked tumbling and floor exercises. I could have competed but decided not to. They wanted to put me on a team but I didn’t have the time to do it with skating.” She doesn’t participate in any other sports now.

For fun, Liang said, “I like to hang around with my sister and friends. I don’t go to too many movies, but sometimes we go on a free weekend. I read a lot. I like fantasy books, like Lord of the Rings.” She also enjoys shopping. “They had big shopping places when we went to China,” she said. “That was a lot of fun. I’d like to go to Japan or Italy sometime.” Liang keeps a collection of Beanie Babies, but gives some of the stuffed animals she receives to her sisters and friends. She also has a cat, named Indy.

Liang is in the ninth grade at Faith Baptist School, where her favorite subjects are math and science. “I get mostly straight A’s,” she said. “I plan to go to college but I haven’t decided on a major yet. Right now, I’m just shooting for the 2006 Olympics and I might stay for 2010 so I haven’t thought about a career.” For next season, she said, “I’m shooting for clean programs every time. I hope to improve in every area of my skating and move up.”