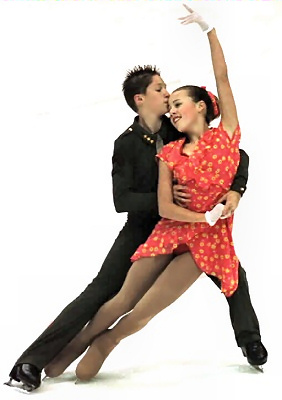 Novice ice dancers Adrienne Koob-Doddy and Robert Antonelli have been skating together for five years.

Novice ice dancers Adrienne Koob-Doddy and Robert Antonelli have been skating together for five years. In that time, they have finished fourth in juvenile dance at the U.S. Junior Nationals in 2000, ninth in intermediate in 2001, then sixth in intermediate in 2002. After winning the Pacific Coast Sectionals in novice dance last season, the skaters finished fifth in novice at U. S. Nationals. Later this spring they won a silver medal in novice dance at the Hellmut Seibt Memorial in Vienna. At the first North American Challenge Skate in Lake Placid last week, the dancers finished second in the first dance and fourth overall. The USFSA recently named them to the Reserve Team envelope and they will compete at their first Junior Grand Prix in Slovakia this fall.

Both dancers hope to get their gold medals in dance, moves in the field, and freestyle and make the world team in senior dance. “We hope one day in the near future to win or medal at Nationals and to hopefully make it to the Olympics someday,” Antonelli added. “I like the feeling that I get when I skate,” Koob-Doddy emphasized. “It feels like flying. I also enjoy performing in front of a crowd and working with my partner. I would like to compete as long as I can, physically and for however long I enjoy it and am improving. Once I don’t get that feeling or it’s no longer fun, it may be time to stop.” Antonelli said he hoped to continue, “until my heart decides to dislike it,” but hasn’t decided on a future career in skating. “I would like to be either a coach or a choreographer,” Koob-Doddy stated. “I’ve already started teaching group lessons so I am getting the experience. Whatever I do, it will be in skating.”

Koob-Doddy started skating when she was eight. “I started skating after I watched the 1994 Olympics with Nancy Kerrigan,” she remembered. “It looked like a lot of fun, plus I was bored with sports like soccer and T-ball that I was playing at the time.” Antonelli began skating when he was five. “There was a flyer in kindergarten and the kids did it as a group thing,” he said. He competed in singles for nine years up to novice men, but enjoyed dance more. “I like the idea of a partner and dancing to music because I am an entertainer and performer,” he noted. “Dance came more naturally to me because I had been taking ballet, tap, and jazz when I started skating,” Koob-Doddy said. “Also, in relation to freestyle, I was a late starter. I competed in singles until I was thirteen, but my best result was winning at the Wissahickon Summer Competition.”

The skaters teamed up in January of 1999. “I was doing solo dance with my coach, Louise Petri, and Adrienne’s mom asked if I was interested in doing a show with her daughter,” Antonelli remembered. “Rob and I skated in a festival for the Skating Club of Bridgewater when I was ten and he was eleven,” Koob-Doddy stated. “We started skating together the following January when we decided to compete Juvenile.” Neither skater has had any other partners.

The dancers’ primary coaches are Cheryl Demkowski Snyder and Robbie Kaine at Philadelphia Skating Club. They also take lessons in South Brunswick, NJ from Mark Fitzgerald. They train for about three hours every day on ice and try to get in an hour of off ice work. That includes strength, core, flexibility, and cardio workouts. In the summer, they also take Pilates and ballet. Koob-Doddy started ballet classes when she was 4 and continued until she was 12. “At that point I didn’t have enough hours in a day and had to cut my ballet down to only in the summer,” she said. Antonelli began jazz lessons at nine and the team began ballroom lessons four years ago.

Among the skaters favorite dances are the Paso Doble and the Blues,” Koob-Doddy stated. “Last year the Blues was hard for both of us. We spent so much time on that dance but it all paid off.” “I don’t really consider any of the dances hard,” Antonelli noted. “All dances are difficult as you progress to the higher levels but then they get easier over time.”

Diane Agle choreographs the couple’s programs. “The music choice is basically a team effort,” Antonelli said. “We all have certain amounts of input. “My mom in the past has come up with the concept of the music and finds the actual pieces,” Koob-Doddy said. My dad cuts the music, creates the transitions and plays whatever instruments are needed. The last two seasons, Rob has played guitar on it. All in all, it’s a group project.” For the coming season, their free dance is set to Bad to the Bon and Johnny B. Goode. “It’s something very different than what we have done in the past,” she said. “It will be a challenge.”

“I like to skate to up-beat, fast music,” Koob-Doddy said. “It really gets you, and everyone who is watching, moving.” “I like skating to anything with a guitar,” said Antonelli, who plays in a New Jersey band called Silent Fury, “whether it’s already composed in the song or I have to play it myself.” Off ice, Koob-Doddy listens to Avril Lavigne, Norah Jones, and Good Charlotte. “I also listen to a lot of 80’s rock, mostly because Rob plays it all the time in the car,” she added. “I like classic rock and roll like Deep Purple, Motley Crue, Skid Row, and AC/DC,” he noted.

Other than playing the guitar, he also likes to spend time with his girlfriend, hang with his friends, and watch his father race cars. She likes to take photographs and hang out with friends, either shopping, watching movies, or staying over at each other’s houses. “I like movies that make me laugh,” she said, but no scary movies. Rob and I once watched Halloween and that was the end of scary movies for me.” Antonelli likes horror, action and comedy movies.

“I also like to read and hang with my family a lot,” she said. “I read a lot for my English class which includes mythology, humorous fiction, and other selections. When I have time to read on my own, I read the Harry Potter books. I love them. I have also started making scrapbooks from all my pictures; the first one I made was for Nationals in Dallas, Texas.” Antonelli collects shot glasses from everywhere he has traveled, while Koob-Doddy collects miniature license plate key chains from states she has visited. “They were the first thing I ever saw with my name on them,” she said. “Adrienne isn’t a common name and my name was never on mugs or anything else.”

Antonelli used to play baseball and soccer but gave them up when he ran out of time. Koob-Doddy said she doesn’t play any other sports competitively, but enjoys playing baseball or basketball with friends at the gym and plays a lot of outdoor games with her brother Jake. For pets, her family has a Dalmatian named Violet and two finches. He has a dog named Oreo and a cat named Trinity.

On weekends, her family often goes to their lake house in the Poconos. She has also been to Bald Head Island, NC, Hilton Head Island, SC, and Disney World. “I go camping in High Point and spend a week and a half in North Carolina, with an occasional trip to Florida,” Antonelli said. “I like to go any place that is hot.” “Within in the U.S. I would like to go to California, Hawaii, and the Grand Canyon,” Koob-Doddy noted. “Outside the U.S. I would like to go back to Austria and go to Italy and England.” He also wants to go to Italy and Austria again. Austria was his favorite trip. “It was a once in a lifetime experience and I’ll never forget how it changed my life,” he said. “Disney World is one of my favorite places to go,” Koob-Doddy noted. “We don’t go that often so each trip is more special. Austria was one of my favorite places to go for skating. I had never been out of the country before that competition so that was cool. I also liked Salt Lake City, UT when Rob and I were there for Pacific Coasts.”

Antonelli is a sophomore at Old Bridge High School. “I’m constantly working hard to achieve straight A’s with an occasional B,” he said. Koob-Doddy attends Voorhees High School for five classes and home school for three classes through a distant learning school, Abbington Hill School. She has earned straight A’s since 6th grade. Both teens have earned several academic achievement awards over the years.

The team recently had a website created for them at www.koob-doddyandantonelli.com.