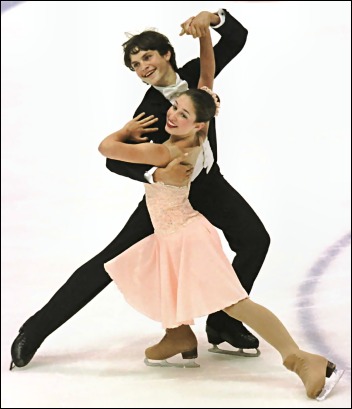 USA’s Emily Blynn and Geoffrey Drayton hope to make an impact this season at the intermediate level in ice dance.

Emily Blynn and Geoffrey Drayton hope to make an impact this season at the intermediate level in ice dance. In their first outing at the 25th Annual Cherry Blossom Invitational Competition they won the James Edward Maltby Memorial Trophy for Intermediate Dance. The couple won all three compulsory dances and the free dance, competing against teams that had finished in the top ten at Nationals in 2002-2003. Last week at the 2003 Lake Placid Ice Dance Competition, they won all four of the compulsory dances and finished fifth in the intermediate free dance, with one first place ordinal, skating first of the 20 teams competing. Last season, the dancers finished second in juvenile dance at the U. S. Junior Nationals in Lake Placid, won the South Atlantic Regionals, Challenge Cup and Skate Wilmington, and took gold medals in compulsory dances and free dance at the 2002 Lake Placid Ice Dance Championships.

“Like any other competitive skater the ultimate goal is the Olympics,” Blynn said. “I’m shooting for 2010 or 2014, but our short term goals are to go to Junior Nationals again this year and skate well there.” “My main goal in skating is to just have fun no matter what happens,” Drayton added. “I want to compete for as long as I can in order to achieve my goals,” Blynn continued. “If I ever become a professional skater, I probably would want to compete professionally. But right now I’m just concentrating on my every day life, and what will happen is going to happen.”

Drayton started skating when he was two or three. “I don’t really remember why I started but my parents said I saw my mom skating and I decided that I wanted to skate too,” he said. “I skate dance because I was never very good at freestyle and I didn’t like falling all the time. I never really competed in singles.” “I used to skate on ponds a lot when I was about two, but I started taking lessons when I was eight,” Blynn recalled. “Most of my friends were skating and I decided since I already sort of knew how to skate that I’d try it. It turned out that now all my friends have quit, but I’m still here!”

“I do dance because especially by now I’ve realized that in freestyle, most skaters don’t have very much expression, but in dance you have to go all out and sell it because if you don’t, you’re not going to get very far. I also like dance because you are sharing the experience with another person, not just going out there and doing it all yourself. Having a partner is sometimes a challenge, but it makes skating so much more fun. In regards to why I didn’t do pairs, I could never really get off the ground very much to do jumps and I’m also very scared of overhead lifts.”

“When I started skating with Geoffrey, I had never had a real partner except for my dance coach,” Blynn said. “I was really clueless because I didn’t even know that people actually competed in dance, I thought it was just something that you tested. We shared the same coach and she thought we’d be a good match. Soon we entered competitions in the Philadelphia areas and just kept going.”

The dancers’ primary coaches are Cheryl Demkowski-Snyder and Robbie Kaine. They also take lessons from Jason Corley for lifts. The skaters normally train on ice for about 14 hours per week, usually at The Philadelphia Skating Club and Humane Society rink, with an hour of off ice training three days a week. Kat Arbour, their off-ice trainer, gives them a special program every month that includes cardio, upper body, lower body, core, flexibility, and interval training. They have also been taking ballet from Kelly Kaiser for about a year. “I can tell that it has really helped me to be more aware of my arms and posture,” Blynn said.

“Like any other competitive Demkowski-Snyder does all of the couple’s choreography. “Cheryl proposes a few ideas to us that she thinks would be good and then we choose which we like the best,” Blynn stated. For their free dance this season, which was choreographed by Snyder, Blynn and Drayton are using two songs: Business of Love from The Mask and Girls, Girls, Girls. Drayton is in a gangster-looking charcoal gray three-piece pinstripe outfit as in the “Chicago” era while Blynn wears a hot pink flapper dress, both made by Del Arbour. “The free dance is completely different from last year’s and it is a little bit more grown up which is something that we needed because we are moving up to intermediate,” Blynn explained.

“I love free dance because it is the most fun, and it gets changed every year or so,” Blynn said. “Compulsory dances are not as fun because they are so repetitive, but I really like the Rocker Foxtrot, the 14 Step and the Killian. I also like watching the Yankee Polka even though I’m not even close to learning it!” Drayton is the opposite. “My favorite dances are the compulsory dances,” he said. “Although I don’t know it very well, my favorite dance to at least watch is the blues.” As for musical styles, Drayton said, “I really don’t have a preference, but I do not really like skating to classical music,” while Blynn noted that she liked the blues more than Latin rhythms.

The European Waltz is the hardest dance that the skaters have tried so far. “It is really hard because both partners have to keep a very, very strong frame and posture the whole time in order to not get whipped around the circle,” Blynn said. “While you’re concentrating on frame, your head has to be up and you have to be smiling no matter what.” Drayton agreed, noting, “Whenever I don’t do something right and especially something to do with my upper body, it starts to whip and holding my partner in for three patterns while we are whipping the three turns is extremely tiring.”

Off ice, Drayton said, “I listen to a lot of rock music dating anywhere from the sixties to now,” Drayton said, “but mostly I like 80s heavy metal. I took piano for about seven or eight years but never really got better so I quit a couple of years ago.” Blynn said she listens to whatever is on the radio except for classical and hard rock. She also used to play the piano and has participated in a few school musicals because she loves to sing.

“I have always loved to perform,” Blynn stated. “I used to make up dances and do them for my family in front of the video camera. When I’m skating, I love having an audience. Every time I compete I pick out a person in the audience or a few of the judges and decide that I’m going to make them watch us the whole time. Basically I just like going out there and showing people what we can do.”

“After I stop skating, I want to try coaching, or judging for a while, and see how I like that,” Blynn stated. “After I leave the skating world completely, I want to become an architect because I really love designing creative houses.” “I plan to compete until I go to college,” Drayton said. “After skating, I think that I would like to be a mechanical engineer.”

Blynn attends The Agnes Irwin School, where she has just finished eighth grade. “I’ve been there since kindergarten, and I really enjoy it because they understand what skating means to me,” she said. “I’m a very good student because at an early age my parents and teachers made it clear that school work is important.” Drayton, who has also just finished eighth grade, goes to Benchmark.

To relax, Blynn enjoys being with her friends, both from school and skating, and likes to go to the mall. “I like to hang out with my friends doing lots of things like playing football and other sports,” Drayton noted. “I like tag football, kickball, basketball, but mostly I like to play soccer. I also play tennis and golf in the summertime.” Blynn also enjoys sports. She played volleyball for her school last winter and also enjoys lacrosse, tennis, and swimming.

Blynn loves to read all types of books. “I especially like fiction and biographies of skaters,” she said. She just finished reading Frozen Assets by Mark Lund. “I really like reading fanciful fictional stories,” Drayton said. “My favorite books are the Lord Of the Rings trilogy. I like action movies like The Matrix, and of course, The Lord of the Rings.” Drayton has an unusual hobby. “I collect masks from different countries,” he explained. “Some of the countries I have been to, but most of my masks come from places my grandmother goes because she travels a lot. Currently I have about a little more than twenty of all different sizes.” Blynn collects Limoges ware, state quarters, and dolls from foreign countries. She also has two cats named Tiger and Whiskers, while Drayton has two dogs – Penelope, a white Golden Retriever, and Polly, a Toy Poodle.

For vacation, Blynn’s family usually goes to Baddeck in Nova Scotia, where they share two houses. She likes to sail and water ski there. Drayton’s family visits Keene Valley, New York, a small town just a half an hour away from Lake Placid. He likes hiking and other mountain activities. Her favorite trip was to the Caribbean, while his favorite was to the Grand Canyon. He would like to visit South America while she would like to travel to Australia, California and Antarctica.