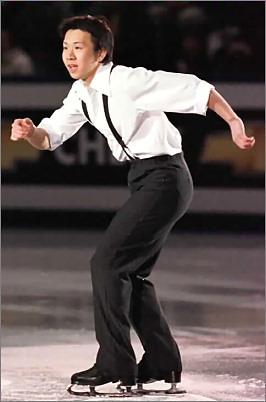 Takeshi Honda has been at the top of men’s figure skating in Japan for the last eight years.

But for most of the year, Honda actually lives in Barrie, Ontario, Canada, where he trains at the Mariposa School of Skating with Doug and Michelle Leigh. “I moved to Barrie five years ago right after Skate Canada,” he said. “I knew Doug since I had competed against Elvis [Stojko], then Steven [Cousins] asked me to come skate with them. And Doug had been Brian’s [Orser] and Elvis’ coach and they were world champions.” He’s enjoyed the move. “I love it in Canada,” Honda stated. “I really like the weather.”

Honda has a nice sense of style to complement an arsenal of triple and quadruple jumps. “It takes not just jumps, but footwork and spins, to win at Worlds,” says Honda, even though jumping is his favorite part of skating. One of his skating idols as a child was Canada’s Kurt Browning, another jumper with style. Like Browning, Honda works hard on quadruple jumps, including both a quadruple toe loop and a quadruple salchow in his programs. He is the first Japanese man to land a quad in competition.

Honda doesn’t come from a skating family. Skating is not very popular in Japan. But his brother, Hiroshi, started competing as a speed skater, where he reached the prefecture [state] level. “I was always competing with him, so I wanted to try something he didn’t do,” Honda said. He started skating at six and began figure skating at nine, doing freestyle because he likes to jump and is “too light for pairs or dance.”

When he was 12, Honda landed his first triple salchow, followed by his first quad toe loop at 15. “I actually landed both the quad salchow and the toe loop on the same day,” he remembered. Those are his favorite jumps. “I find edge jumps easier than toe jumps,” he said. In the summer, he has experimented with triple loop/triple loop, quad toe/triple toe, and quad toe/triple toe/triple loop,. “I’ve even tried the quad lutz,” he said. “I’ve landed it clean, but I haven’t got the right timing on it yet.”

Honda practices for two or three 45-minute sessions on ice five days a week. “I skate my short and long programs every session every day,” he said. Unlike many skaters, Honda does not spend a lot of time training off ice — no balletics, conditioning, or running; occasionally some light weight work. “Mainly I just do sit-ups and other light exercises,” he said. He does do “a lot of rotation work on that jump spinner thing, but it’s hard to get the right feel. I also just jump off the ground and spin, but don’t use the trampoline,” Honda explained.

Kurt Browning choreographed Honda’s short program last season to Leyenda by Andy Hill performed by Vanessa Mae. Nikolai Morozov did the long program to River Dance. “I have some ideas for my programs and we try them,” Honda said. “Some work and some don’t. I like to play around with steps.” He also has several exhibition programs, including Sing, Sing, Sing and Wherever You Go, I Go. “For the short program, I had a couple of ideas for a tango or flamenco program. I’ve done a lot of Spanish programs and they’ve turned out really well. I changed choreographers this year so I could try new stuff between now and the next Olympics. I like to try all kinds of music just to see what works.” Off ice, Honda listens to classical and pop music, except hard rock and loves karaoke. “I go whenever I’m in Japan,” he said. He learned to play the piano when he was three.

Honda enjoys playing pool and video games, both in arcades and at home with friends. But his passion is driving. He loves to just drive his car around and look at the scenery. “I love to drive down to Toronto to see friends and go to the movies, especially comedies,” he added. He reads Japanese books that he buys on the Internet and uses his computer for a few hours each day. Honda collects watches, clothes and necklaces and keeps some of the special toys he’s received at home. He donates the others to hospitals and little kids at schools.

Honda likes to go to different places on vacation, but said, “sometimes I just like to do nothing.” Hawaii and Australia were two of his favorite trips so far. “I’ve been to many places, but I don’t really have a favorite now,” he said. He doesn’t have much time for other sports or hobbies, but enjoys listening to popular music when he’s not skating or studying at a Japanese high school with a concentrated program for athletes.

Honda has finished his high school work, but has no current plans for a university degree. “Right now I’m just studying skating,” he said. “Sometimes I help in the seminars and give the kids a little advice. But I’m still young so I have time to decide what I want to do after the next Olympics.”