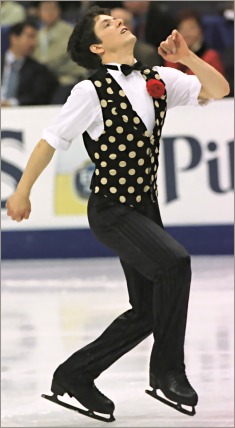 At 25, Ryan Jahnke is one of the veterans of the U.S. Figure Skating Team.

At 25, Ryan Jahnke is one of the veterans of the U.S. Figure Skating Team. He has been competing at the U. S. Nationals for over ten years but never made the World team before last season, when he prophetically chose “Cinderella” for his long program and started living his own Cinderella story.

Jahnke won the U.S. novice men’s championship in 1993, then followed with two bronze medals in juniors in 1995 and 1996. For the past six years, he has finished in the top ten in seniors, finishing third in 2003. That earned him a trip to the Four Continents Championships where he finished sixth. Then, it was on to the World Championships in Washington, DC, where he continued to excel. Jahnke was near perfect in the qualifying round, finishing third behind Michael Weiss and Takeshi Honda. He ranked ninth in the short and 18th in the long to finish 13th overall. That put him in the company of skaters like Michael Weiss, Rudy Galindo, and one of his idols, Paul Wylie, who hovered near the top for years before making the jump to the podium, then making a splash on the international scene.

Although no one else in his family skates, Jahnke said he began skating when he was seven because “my friends could all skate because they played hockey. I wanted to be able to skate outside with them in the winter.” Jahnke noted that he continued skating because “I enjoy the freedom of movement that comes with skating. It feels like you can cheat the laws of physics.” But although his buddies stayed in hockey, Jahnke began competing in figure skating. “That’s where I believe the pursuit is, the most challenge,” he said.

Jahnke was 14 when he landed his first triple, a triple salchow. Although he has been successful with the other triples, he has had trouble with the triple Axel. “I’ve been trying to get it consistent for the last several years,” he lamented, but his triple Axels were solid at both Nationals and Worlds. Jahnke is still working on landing a quadruple jump, but balances that deficiency with excellence in other areas such as his footwork, spread eagles, and camel spins. He aspires to be the U.S. men’s champion and one of the best skaters in the world.

Although he is from Detroit, Jahnke trains at the Broadmoor Skating Club in Colorado Springs. He works for about three hours a day on ice and another four hours off ice. That includes ballet, Pilates, weight training, biking, slideboard, stretching and walking through jumps. He has been taking ballet almost since he began skating.

He moved to Colorado in 1999 to continue to train with longtime coach Diana Ronanyne and choreographer Tom Dickson. Jahnke coaches now and plans to continue to coach skating after he retires from competition. He also prepares some of his own choreography. This year, he used “La Strada” for the short and Prokofiev’s “Cinderella” for the long program. “It shows off my style,” he noted. “I like having a character.” Jahnke enjoys skating to a variety of different types of music rather than being typecast by using the same style of music every year.

Jahnke was awarded a four-year academic scholarship to Wayne State University, where he studied pre-medicine, but had to quit when he moved to Colorado. Other than coaching skating, he has also considered teaching the Dale Carnegie course on public speaking and human relations and operating a home-based business.

Faith is important to Jahnke and it shows in his off ice activities. He listens to contemporary Christian music, reads books on Christian living in addition to the Bible, and teaches a Sunday school class. He also spends a lot of time doing things with his wife, Tashiana Foreman, who he married in June 2002.

Jahnke enjoys traveling and usually stays a couple of extra days at international competitions to look around. “Vienna is the greatest city I have ever seen,” he said. “I loved the architecture and the atmosphere.” He added that he “would like to explore the western states more and go to Hawaii, South America, Israel, and Scandinavia.” One of his hobbies is collecting money from the different countries that he has visited.